Doctor Who Story 211: The Vampires of Venice 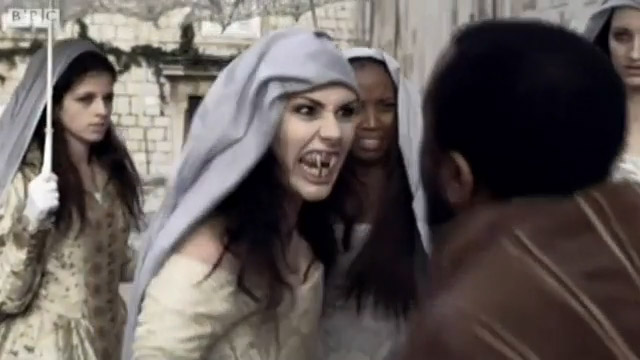 STORY 211: THE VAMPIRES OF VENICE


Here's the deal with The Vampires of Venice: without giving too much away, it's not about vampires. I suppose Fish Creatures of Venice didn't have the same cache. I confess to having really high expectations for this story: it had a historic backdrop (which I like), lavish costumes (I'm a sucker for period costume pictures), and otherworldly creatures.

In the first few minutes of The Vampires of Venice, it started sinking (no pun intended) in that this was aiming for a more comedic story, and there's nothing wrong with that. However, the way the comedy was put in was killing whatever tension and fear a good Doctor Who could bring, and then the big reveal only made it look more idiotic.

We start in 1580 Venice where Guido (Lucian Msamati), a simple Venetian, brings his daughter Isabella (Alishea Bailey) to the Calvierri School so as to have a future. She is accepted by Lady Calvierri (Helen McCrory) and her son Francesco (Alex Price), who are not what they appear to be.

Shift then to Rory's stag (aka bachelor) party. Rory (Arthur Darvill) happens to be Amy Pond's (Karen Gillan) fiancee whom we met in The Eleventh Hour. The Doctor (Matt Smith) crashes the party in a remarkably predictable manner, and if you didn't think so when Rory's mates rolled out the large cake then you need a crash course in surprises. The Doctor tells Rory about his near-rape at Amy's hands, well, not in those words, merely telling him that she kissed him and was a good kisser...always the best thing to tell a man that the woman he's about to marry has been locking lips with someone else.

In order to make up for all this, The Doctor whisks Amy & Rory off to romantic Venice, 1580. There, all three encounter this mysterious school, with the mysterious students, and the mysterious owners: the alleged Vampires of Venice. Amy decides to go undercover to see what has happened to Isabella and discovers this coven, but also discovers that while they may appear as vampires, they are really Saturnyians who have fled their home-world due to "the cracks" (ALWAYS THOSE DAMN CRACKS--AT LEAST I DIDN'T SEE THEM THIS TIME). Venice is the perfect place for them--full of water and all, and they intend to take over the population and failing that (seeing The Doctor doesn't approve or help) sink the city. 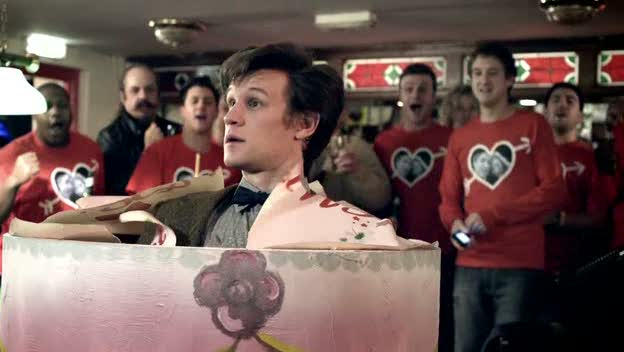 Frankly, Vampires of Venice shouldn't have been as boring as it ended up being. I think it would work to focus on the good things in the story.

The costumes were nice. Ray Holman designed some beautiful pieces that evoke the world of 16th Century Venice. The wardrobe for Rosanna Calvierri (I don't know if she was a noblewoman in the story, but I kept thinking of her as a Countess or a Duchess, primarily because of her costume) and Francesco were lavish without being excessive. They served as a wonderful counterpoint to the simplicity of the near shrouds the vampire girls wore. We also have to remember he created the t-shirts Rory and his fellow party goers wore, complete with a picture of Rory and Amy in a heart (how precious).

Murray Gold also pulls himself to a great standard (and has me forget how I disliked the score to The Time of Angels--all 50s horror film-style) with excellent period piece music.

The guest stars were also brilliant. McCrory's Lady/Countess Calvierri (perhaps I keep thinking she's a noblewoman because my mind went back to the story of Countess Bathory, vampire and all) was in equal turns menacing and tragic, majestic and sad. For most of The Vampires of Venice, she maintained an air of haughtiness and intimidation, almost the perfect villainness. McCrory never let up in her performance, even when we had to buy the idea that she was really just a big fish (though I must confess I thought they were spiders). She recites a beautiful soliloquy about what they will do to Amy. "We drink you till you're dry. Then we fill you with our blood, rages through you like a fire, changing you, until one morning, you're awake, and your humanity is a dream, now faded". That is beautiful writing, and beautifully delivered by McCrory.

Price's Francesco was also perfect: a lecherous momma's boy who was both for lack of a better word flamboyant and dangerous. Msamati's Guido, though a smaller and less showy role, also created a man who wanted the best for his daughter but who realizes too late the danger she and all Venice are in. 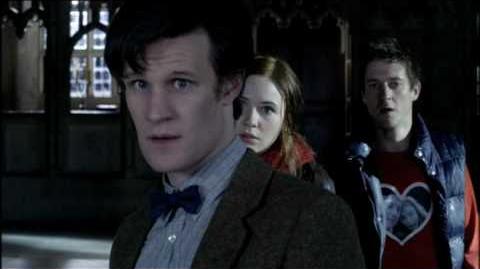 Of all the leads, Darvill is the only one who is relatively new. Gillan and Smith still have a wonderful rapport which makes him a bit of a third wheel. Darvill is in the story more of a comic foil for the Gillan/Smith double act, and while he was all right his role is the first signal of what is wrong with Tobey Whithouse's script. To quote the title of a play, this was No Time For Comedy. I don't object to comedy in Doctor Who, but in The Vampires of Venice it became far too distracting, and at times obvious and idiotic.

Take the opening at Rory's party. I knew what was going to happen the moment they rolled the cake out. It didn't surprise me, and while Smith and Darvill did as good a job as the script allowed, it didn't strike me as funny or cute or clever. It only got worse, with the nadir being when Rory and The Doctor get inside the Calvierri school. Rory has the foresight to bring a torch (i.e., a flashlight) with him. When he sees this, The Doctor pulls out from the front of his pants what appears to be this large ultraviolet lightsaber. "Yours is bigger than mine," Rory says, and it's at this point I did something I haven't done with Doctor Who in a long time: I rolled my eyes.

It was pure instinct, but it was a signal that The Vampires of Venice had just gone off the rails. Wow, what an original line. Never heard that before...

Earlier, there was a stab at a pun (or at least I think it was a stab at a pun). Rory is demanding more information about this kiss (and frankly, I still argue it was more than a kiss, it was a near-rape). When The Doctor tells Rory how Amy kissed him, Rory's furious.

"And you kissed her back?" Rory fumes.
"No, I kissed her mouth", The Doctor responds.
Hilarity did not ensue.  Groaning did.

In another comedy failure, Guido is wearing Rory's stag/bachelor party t-shirt for no real reason other than it might look funny. Given that it's an extremely serious situation (attempting to rescue Isabella and Amy), I fail to see why they went that route. 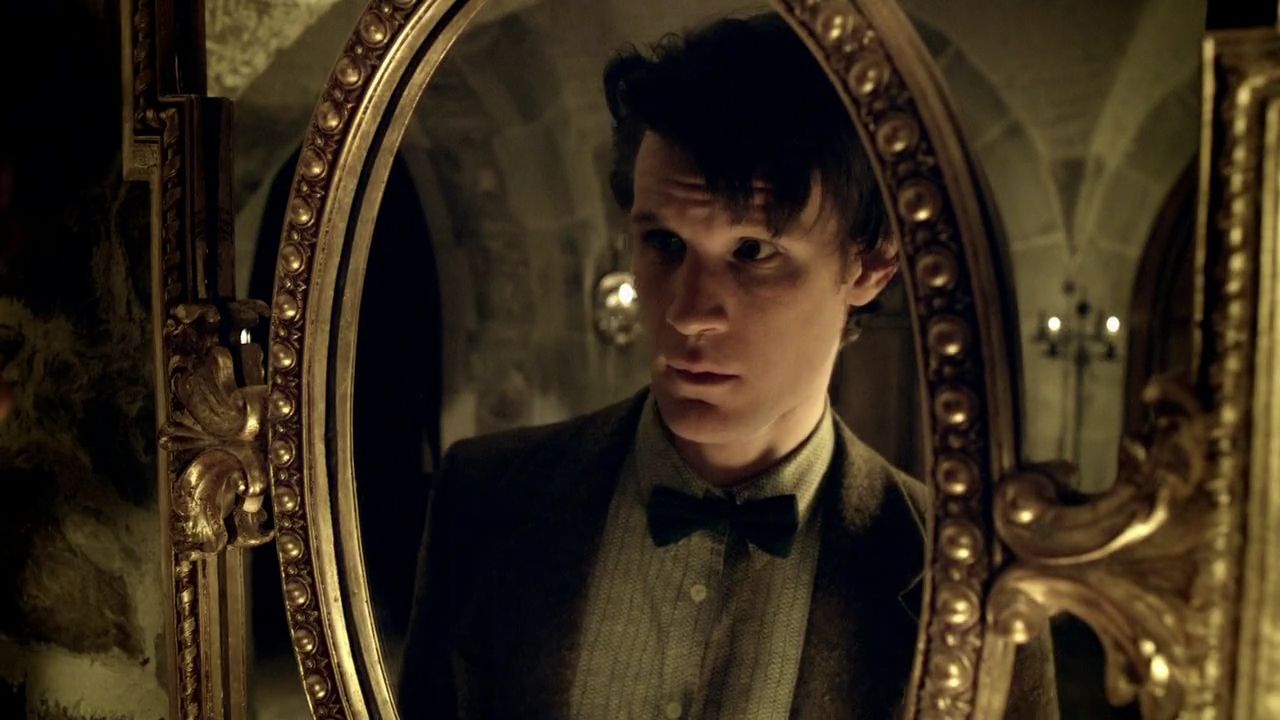 In retrospect, this is the first episode, I think, where I thought Smith's portrayal had gone from good to silly.  It was too broad, making the Doctor not child-like but essentially an idiot.  Looking back, perhaps Vampires of Venice is when I began turning on Matt Smith.  No one can be that stupid when it comes to bachelor parties.

Also what does it for me in The Vampires of Venice is how repetitive it all seems. It may be unfair to remember other stories while watching, but my mind floated to two stories from the original series: State of Decay (which featured vampires) and The Talons of Weng-Chiang (which featured an alien taking young girls' life source for his own need).

I couldn't help going back to those stories because there seemed to be echoes of them in The Vampires of Venice. However, let's say you only started watching Doctor Who when Rose premiered. You still couldn't help remember stories from the revived series while watching. Like in Rose, the boyfriend is this generally dumb and weak and it takes the woman to rescue him. 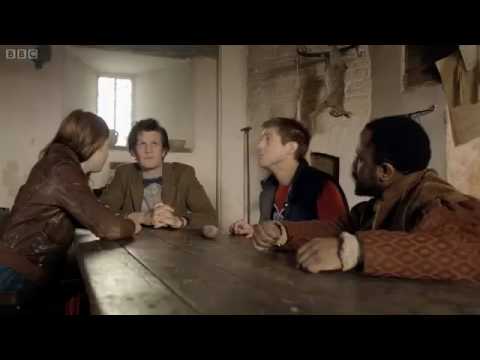 Like in School Reunion (curiously also written by Whithouse) you have aliens at a school taking over the students...and oddly, both times girls. There is yet another episode (which I can't remember) where Rose Tyler and The Doctor were literally leaping with joy at the thought of danger (not unlike Amy and the Eleventh Doctor here).  Can it be that the show is already repeating itself?

I almost wondered if there were more running themes to Season/Series 5 of Doctor Who than that damn crack. You have the running theme of weak/stupid boyfriends (Mickey Smith vs. Rory Williams). You have said boyfriends in competition with The Doctor for the woman's attention/affection. You have said boyfriends being almost always remarkably inept at saving the girl...in fact, in both Rose and Vampires of Venice she had to save him. You have the recurring theme of a love triangle. Is it at Series/Season 5 where ideas are starting to dry up?

Out of all the sins of The Vampires of Venice the greatest is this: there are no vampires in The Vampires of Venice. They are actually aliens brought to Earth due to the cracks (of which frankly I'm tiring of). I wish they had kept them as vampires because not only would it have been truth in advertising but there would have been a greater menace in my view. I can see why they would want a more 'scientific' reason for the blood sucking, but when you have a setting as perfect as Venice, and when you have the title call them 'vampires', I wonder why there couldn't be aliens who were vampires.

On a side note, I wonder whether the fates of Isabella and Signora Calvierri are a bit gruesome, especially given that this appears to be intended to be more comedic. No matter how much they tried, they could never strike a proper balance between comedy and horror.

To say that The Vampires of Venice is a sorry disappointment is an understatement. It is not as bad as my reaction to Love and Monsters (the episode that made me almost completely abandon the revived Doctor Who), but the chasm between what it could have been and what it was is simply too large to ignore. McCrory was brilliant: she earns a 10/10 as a masterful villainness and an amazing performance. As for the rest of The Vampires of Venice, anyone know where I can get a nice stake?

Next Story: Amy's Choice
Posted by Rick at 7:06 PM