Goal! The Dream Begins: A Review

Are you ready for some futbol?

I went into Goal! The Dream Begins with only a rudimentary understanding of the beautiful game. This was not a beautiful film, but I was won over anyway.

Santiago Munez (Kuno Becker) is, like almost all Mexican-Americans in Hollywood's mind, an illegal alien with one burning passion: football/soccer (throughout the review I'll use football but may call it soccer from time to time). He plays every chance he gets, and he's got skills. These skills, however, are of no interest to his intense, gruff, angry father Hernan (Tony Plana), who has one burning passion of his own: owning his own gardening business (since in Hollywood's mind, all Mexicans/Mexican-Americans are gardeners).

Thus Santi toils away as a gardener and a busboy (again, only in Hollywood), saving his money and itching to get his chance to play. As it happens, one time he catches the eye of Glen Foy (Stephen Dillane), a former football star and scout who sees talent in Santiago. Foy invites him to Manchester to try out for Manchester United. He's nearly has enough to buy the ticket to go, but his father helped himself to his son's money to get a truck for his business. Santiago's grandmother Mercedes (Miriam Colon) gets him the money and he flies (via Mexico City, since he has no American passport) to the U.K.

It's there that Santiago endures the hostility of other players and the wary eye of the manager Mr. Dornhelm (Marcel Iures) and is about to be cut free until, by a series of curious coincidences, none other than Gavin Harris (Alessandro Nivola), a David Beckham-type footballer (extremely talented yet extremely flashy and decadent) convinces Dornhelm to keep Santiago on. As he continues to push himself to get to play English football, Santiago is tempted by the lure of early fame and romances a team nurse (Anna Friel), culminating in the climatic game where Santiago MUST get the strike in order for Newcastle to go on to Europe.  All the while, Santiago fears his father's disapproval, until in the end, in a roundabout way, he has peace.

There's the cliché of montages of playing accompanied with rock music (in this case Oasis, when they were actually good as opposed to the parody of The Beatles they've turned into). There's the cliché of the angry father who while getting the chance to watch his son's first game (curiously while wandering into a bar that is the Los Angeles headquarters of Toon fans...what are the odds), also drops dead. There's the cliché of Santiago's grandmother and brother going to same pub to watch the final game and discovering his father did indeed see him play. We also have to seriously question the probability of Gavin needing a taxi at the same time Santiago is using the exact same taxi. We even have the cliché of the tied game, last few seconds left, and Santiago Muñez, our hero, needing to score the winning kick or else Manchester is out for the season.

Even the score by Grame Revell, was appropriately rousing, though to his credit it never drowned out the performances.

Yet, in spite of this sports film shorthand, director Danny Cannon managed to make Goal! The Dream Begins entertaining and bring about excellent soccer playing sequences. The games felt authentic, and while I learned there were actual professional footballers in the film which added to the authenticity Chris Dickens' editing was masterful. The games were exciting to watch and really put you in them, which added to the enjoyment to the viewing experience. 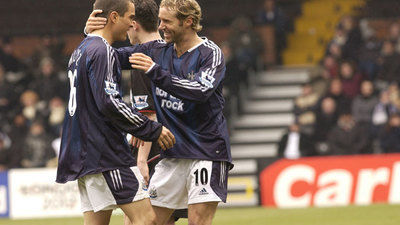 It's to his credit and to the script that we are given so many reasons to be rooting for Santiago. The fact that his father is so harsh, that he's poor, that he's in a completely foreign world, that he's passionate about football, that he's the complete opposite of the superstar Gavin (both in skill and temperament) all have the audience on Santiago's side. With all that, you want him to succeed, and it does appeal to the American sense of meritocracy: with the skills and the chance anyone can rise to be a champion.

Cannon immediately communicates the central passion of Santiago's life without any English dialogue: when they are crossing the border, Santiago loses his soccer ball, and he hesitates between going under the fence and going back for it. Hernan is shouting for him to forget the ball, but Santiago keeps staring between the ball, the fence, and the Border Patrol coming after them. In those few seconds, Cannon manages to tell so much without needing exposition dialogue.

We also have extremely good performances by the cast. Plana makes his father a growling force of anger with an extremely myopic view of life. Even though his character never fully relented his idea that Santiago was chasing rainbows (breaking only slightly when he sees him play while at the pub), Plana doesn't make him a complete monster.

Becker has the advantage of being unknown in the United States, and Santiago as portrayed by him is someone whose passion for football is total, complete, and absolute. There is a scene between Becker and Friel where he exposes his fears that his father's negative views of Santiago's dreams might be true that is quite gentle and soft, and while other actors might have been tempted to go all out to show the emotion Becker chooses to make it more about how Santiago doesn't want to completely collapse, making his performance even more tender.

I was surprised that Alessandro Nivola is neither Italian by birth (in spite of his name) or British (in spite of a very convincing British accent) but is American. It's a credit to his talent that he was convincing not just as a British soccer player but a swaggering British soccer player. Harris was not a parody but an extremely talented man who has let success go to his head, yet sees through Santiago that if he continues his fast lifestyle the thing that got him all the success (football) will slip away from him. Iures was the typical firm but fair/wise manager, knowing Harris and Muñez had skills but having still much to learn.

It's the sense that even though we've seen this type of story before in other films ranging from Rocky to Hoosiers to Rudy, we do get into Santiago's story because the actors never play down to their roles. Goal! The Dream Begins (which does suggest a sequel) is smart enough to know it's telling a by-the-numbers inspirational sports story and doesn't deviate from it. The uniqueness of the film comes from tackling a sport most Americans are not familiar with or fans of but which the rest of the world is passionate about.

When Americans think football, the Mexicans we picture are Tony Romo, Jeff Garcia, or Mark Sanchez, not Herculez Gomez, Jose Torres, or Jonathan Bornstein (told you not to judge by name alone). What keeps the film from being up there with the aforementioned films is its too-heavy reliance on clichés (especially on ethnic lines--would it have killed them to make Santiago a native-born American soccer player of Mexican descent) and plot points that are almost irrelevant (Santiago's asthma was not the crisis the film tried to build it up to be). However, the performances were good enough and the story engaging enough to keep Goal! The Dream Begins from slipping into a dull story where we know the outcome and/or don't care about the people in it.

Until I did research for this review, I could name only six soccer players offhand: Landon Donovan, David Beckham, Cuauhtémoc Blanco, Cristiano Ronaldo, Kaká, and Pelé. Of the six, Donovan was the only one I'd heard of because of his soccer career. Beckham, Blanco, and Ronaldo I knew for their colorful private lives, Kaká due to his devout evangelical Christianity, and Pelé is just a legend up there with Muhammad Ali and Michael Jordan.

However, while, Goal! The Dream Begins isn't in FIFA World Cup-level of sports films, it has enough within it to have you cheering for it, even if you don't know your Landon Donovan from your Donovan McNabb.