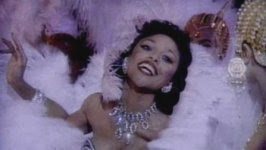 Yes, Tonight Josephine...
It seems incredible to think of it now, but the name Josephine Baker was once famous and infamous, one that conjured up images of wild eroticism, decadence, and defiance. Today, it is highly unlikely that the name conjures up anything but to a select few. The Josephine Baker Story attempts to cover the life and art of a contradictory figure: an American original rejected by her country due to her race and gender, a brave woman who was also extremely fragile.

Josephine Baker (Lynn Whitfield) narrates her life story in the form of a long letter she is writing to her "Rainbow Tribe", the children from various countries and ethnicities she adopted over the years. She begins with her early years in St. Louis, where she survived a horrific race riot in 1917. Going a few years later, she works her way past Broadway (where she must perform in blackface) and goes to Paris. In the height of the Roaring Twenties, she enters a whole new world of freedom, where her race is not an impediment to success. Here in the City of Lights, she is treated with respect, even elevated to great heights, culminating in her Danse Sauvage (which she performed topless and wearing a banana skirt). She becomes the Toast of Paris, and aided by a Sicilian bricklayer posing as a Count named Pepito Abatino (Ruben Blades) she takes a wildly successful European tour.

She then with Abatino attempts to return in triumph to America, and even though she does get to perform Begin the Beguine in The Ziegfeld Follies, American audiences reject her (and by extension, the possibility that a black woman could ever be a true Ziegfeld Girl). Dejected, she returns to France just as the Germans invade. While recovering in a Moroccan hospital, Sydney Williams (Louis Gossett, Jr.), a black American officer, persuades her to entertain the troops, beginning a platonic friendship and her first true efforts to bring about integration between the races. She later marries her French conductor, Jo Boullion (David Dukes), gets into a bitter feud with Walter Winchell (Craig T. Nelson), loses her fortune and her chateau, and ends with a spectacular comeback in Paris just before her death.

As a biopic, The Josephine Baker Story hits many of the moments of La Baker's life with particular emphasis devoted to her work at integration. Take for example when she first performs for Allied troops in Morocco. She begins by gently speaking to the soldiers and questioning why black soldiers, who are fighting and dying the same as their white counterparts, have to sit on the sides or in the back. She then starts bringing them, slowly, to sit among their comrades. She concludes by singing her own 'song of freedom' and literally unites her hands to theirs: one black, one white. The film also emphasizes the glamour and outrageous nature of her stage shows, from her star-making revues to her performance in the Follies to her final comeback show.

The film isn't afraid to show the dark side of her personality: the dismissive manner she had to Abatino (who, unknown to her, was dying when they went to America) and her obsession with adopting more and more children over Boullion's objections. The Josephine in The Josephine Baker Story is not this noble grand dame, but a mix of steely determination and innocence.

Whitfield is magnificent in the title role. She recreates the infamous Banana Dance with the same wild abandon the real Baker had. Her performance is of a woman who never shied away from a fight, especially when it came to being treated with the respect she was entitled to not a great performer, but as a human being.

Again, Whitfield and director Brian Gibson aren't afraid to make Baker at times unlikable: she constantly pushes away men who genuinely love her. The scenes with her and Dukes as Boullion are especially good: intense and angry and yet loving all at once. Still, when financial pressures finally force her from her beloved chateau the scene of her expulsion is heartbreaking. Whitfield's Baker is both fully woman and at times child, naive to how people can be cruel and how at times she can't get what she wants. She is a fighter and also a frightened woman but who has a determination to refuse to give up or give in.

The supporting cast is also excellent. Blades' Count Abatino is somewhat of a Svengali, controlling and pushing Baker to push herself as a performer, but who at the end genuinely loves her and in a sense dies when she takes her anger at Broadway's rejection out on him. The audience feels genuine sadness in his final scene, as he walks away, coughing, into the fog. Dukes is pitch-perfect as Boullion, a man who also loves her and holds on to her growing fixation on adoption and her reckless disregard for money for as long as he could. Gosset, Jr., though having a smaller role, is memorable as the officer who enlightens her to the difficulties of the struggle for genuine equality. Nelson had an even smaller role as Winchell, but in his few scenes recreates his staccato delivery and the viciousness that he could use to retaliate against any criticism.

We also have to give credit to the production value. Jozsef Romvari's sets get an authentic feel for what a Follies Bergere show would be, and the costumes of Maria Hruby and Gyorgyi Vidak recreate all the glamour of La Baker's stage show as well as her private life.

If there are any flaws in Ron Hutchinson's script (from a screen story by Hutchinson and Michael Zagor) is that it gave only a cursory note to her efforts with the French Resistance. Her truly heroic work against the Nazis would make a film in itself, but it received only the briefest of mentions. The Josephine Baker Story also failed to touch on Baker's bisexuality or her still-notorious sexual appetite. It might have played to more prurient tastes but it is a bit of a historic cheat, almost as if they were downplaying her more scandalous private life.

In a side note, I wonder if her Banana Dance actually played up the stereotype of the Beautiful Black Savage, and it might have been interesting if we could have seen Baker's own take on the legendary routine. The sexual aspect is not of that great importance, but I feel her work for her adopted country in its darkest hour should have had more time devoted to it. That was the primary reason she was given a State Funeral (which would have been laughable in her birth country).

The Josephine Baker Story is important because La Baker herself (and her legacy) is important. She did her best to chip away at the walls of bigotry in her homeland, even if she had to do it abroad. It also is highly entertaining, as was The Black Venus herself. The film is not a dry history lesson, but an entertaining and interesting story of an extraordinary woman and performer who should not be forgotten to the confines of history.