The Ugly Truth: A Review 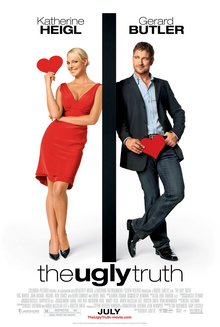 Romance just ain't what it used to be. I think the current idea of a romantic comedy in Hollywood is to fashion a film where a man and a woman who have absolutely nothing in common and have completely opposing worldviews will eventually fall in love (and into bed) with each other. This was the case with Made of Honor (a movie that still causes me to have nightmares) and that is also the case with The Ugly Truth.

It should come as no surprise that the leads will eventually be in each other's arms by the final reel. What should come as a surprise is in how much fun The Ugly Truth has in torturing them (and us) with its total lack of originality or charm: two things that present-day romantic comedies are in such dire need of.

Abby Richter (Kathrine Heigl) is the producer of a not-very-successful morning news program. Her love life isn't all that successful either: we get to see her obliviousness to how her investigating the minutiae of her subject (I mean date) might be off-putting. One night, she catches Mike Chadway (Gerard Butler) on television on his cable-access show The Ugly Truth. Here, he pontificates on what men really want: tits and ass, nothing more.

Abby is horrified by Chadway's misogyny and crudeness and calls in. Unbeknownst to her (isn't it always the case), her bosses have been watching the same broadcast, and decide Mike is the perfect vehicle to bring up ratings. To her horror (she seems to be horrified a lot) ratings do go up. It's at this juncture where she meets Colin (Eric Winter), a new neighbor who fits all ten of her requirements for the Perfect Man. She strikes a bargain with Mike: he will help her get Colin and in return she will guide him to more success on the show, but if his advice flops, he quits.

In this win-win for both, she agrees and we get My Fair Lady: Hooker Version.

Abby follows Mike's rules, for example, Never Criticize and Never Talk About Your Problems and dresses like a whore. In the midst of all this, Mike starts realizing there's something special about Abby, and...Oh why bother going on--we know where all this is headed. You'd have to be an idiot (on the level of Abby or Mike) to not see what is coming.

I won't lie: there was at least one moment in The Ugly Truth where I did laugh: the scene at the restaurant where Abby has lost the control to her vibrating underwear was the cause of laughter. However, I think this is the perfect example of how The Ugly Truth isn't a true romantic comedy. The laughter doesn't come from the actual situations. Instead, they come from embarrassing the characters and their humiliations.

It also reflects the main traits of our main characters: Abby's basic stupidity and Mike's casual cruelty. It never occurred to Abby to A.) not even try on the pair in the first place or B.) excuse herself and remove them either before leaving on her date or at the restaurant. Mike, who soon discovers why the vibrating underwear is going haywire, does nothing to stop her from being humiliated in front of her boyfriend or employers but can only make halfhearted attempts to stop from laughing at Abby's situation. This makes Mike extremely sadistic, which only makes their eventual coming-together all the more puzzling.

It's obvious that Butler is having fun playing Mike: with his permanent five o'clock shadow and slovenly appearance he looks like an updated Neanderthal, especially in his behavior and attitude with women. Considering he's such an (almost) irredeemable jerk, one wonders why women would be so enthralled with his mere presence (I figure the big draw would be his looks and his 300 body, since he has no mind).  I do wonder why Butler keeps getting cast in these types of films: he is good looking, yes, but doesn't have much charm to make these types of romances believable.

As I write this, I wonder if the fact that three women wrote The Ugly Truth (Nicole Eastman, Karen McCullah Lutz, and Kirsten Smith) gives it a peculiar slant. The film isn't flattering in its ideas about women (either coming off as overly controlling like Abby or bimbos like the Jello-wrestling babes Mike delights in), so instead I suspect that the screenwriters instead were projecting their ideas about men: even the most offensive and sleazy of guys can be changed by the right woman, one who is successful, in a position of authority, and (allegedly) intelligent.

Heigl, to her credit, does the best she can in trying to make Abby a somewhat believable character, though director Robert Luketic seems determined to stick her in amazingly unbelievable slapstick situations and to make her a desperate woman, so desperate in her need for a romantic relationship that she's willing to follow the advise of someone she loathes to land her dream man. Winter is pretty much a blank in The Ugly Truth: he is basically there as eye candy who appears to have no personality but a great set of abs.

Minor roles such as the co-hosts of the morning show were clichéd: John Michael Higgins' Larry was your Ted Baxter-style anchor while Cheryl Hines' Georgia was his somewhat shrewish and emasculating co-anchor (it should be no surprise that they are married in the film).

The one true highlight was when Mike gets interviewed on The Late Late Show with Craig Ferguson (Ferguson playing himself): it's genuinely fun watching two Scotsmen--one with his strong Scottish accent and one with a strong American accent. The few attempts to make Mike less of an obnoxious jerk (introducing a nephew that he appears to genuinely love) fall hopelessly flat.

It's also another hopeless cliché: introducing a child into the male lead/sex addict's life seems to be shorthand for 'This guy may treat women like whores and discard them as soon as they no longer please him sexually, but at heart he's really a nice guy (for an example, try Failure to Launch, which went down a similar route with even more disastrous results). Even worse, this angle wasn't explored at all and the child was rather unnecessary to the overall story. If the nephew was there to only serve to try to make Mike more human, it didn't work.

Side note: it's never really explained how Mike actually makes a living. It's highly doubtful one can make money off a public-access cable show, and we never see him doing anything else besides wrestling girls in Jell-O. It looks like the morning show is his only true source of income or worse, his first job. He made me think he was a Sexual Glenn Beck: someone who talks a lot and tends to go off the rails but gets many followers to his loopy ideas about sex and relationships. We're suppose to believe near the end that the reason he is such a jerk is because he's been hurt by scores of women. Again, this is an effort to make him less of a twit than he actually is. I digress.

Nothing about The Ugly Truth is believable, least of all that our two leads would even like each other, let alone fall madly in love with each other. I am aware that we can suspend disbelief for a while (in fact, I would argue it's a requirement for watching any film). However, we can only go so far without ourselves losing a bit of our intelligence to accept stupidity as humorous. The Ugly Truth has nothing original or clever or amusing to say about relationships. In fact, there is no truth in it, and yes, that is rather ugly.