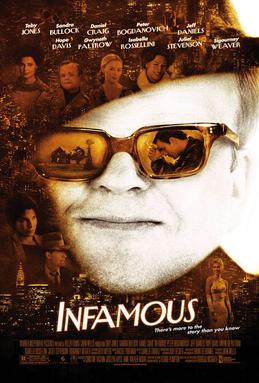 Truman Capote, for all his gifts as a writer, is someone who is probably remembered more for his being than his writing. In his later years, Capote almost became a parody of both himself and the stereotypical gay man: the way he moved, dressed, behaved, and especially his thin, high voice all played into the idea of a homosexual man as effeminate. This is made clear in Infamous when Capote (Toby Jones) goes to Kansas with his fellow writer Harper Lee (Sandra Bullock). Every time he tries to interview people who knew the victims of an especially brutal murder which would be the basis of his classic 'non-fiction novel', In Cold Blood, he is dismissed with a respectful 'ma'am'.

It gets to the point where he turns in disbelief and frustration to Lee and asks, "Do you think everyone keeps calling me 'lady' to be mean or can they honestly not tell?"

It is not uncommon for Hollywood to go after the same subject/story at the same time with two competing projects. Infamous, the story of how Capote came to write In Cold Blood and the complicated relationship he had with the murderers of the Clutter family, Dick Hickock (Lee Pace) and Perry Smith (Daniel Craig), had the misfortune of being release in 2006, a year after another film on exactly the same subject, Capote, was released.

This may be why Infamous did not get the attention or recognition that Capote got. The public already got one version of the story, so why bother with another version of the exact same story? The fact that Infamous withered away in the theaters is a most dreadful shame.

In a separate essay I will take the time to compare the two in the oddest version of the remake phenomenon, but for now let us concentrate on Infamous itself.

Truman Capote is living the high life. Riding on the success of his short stories and novellas (in particular, Breakfast at Tiffany's), he hobnobs with the elite of New York society, including his dearest friend, Babe Paley (Sigourney Weaver), wife of CBS President Bill Paley (Lee Ritchey). The circle he is in, which will be the inspiration for his hoped-for next work, Answered Prayers, is one where he is happiest at. That is until he reads a newspaper story about a family of four being murdered in a small Kansas town. The story gnarls at him and he decides it will be a wonderful subject for an article, not on the crime itself, but on how such a particularly brutal crime affects a small town.

With that in mind, he goes to Kansas with his fellow writer Nelle Harper Lee (who we all know simply as Harper Lee) for his article. His flamboyant persona cuts no ice with the local investigator Alvin Dewey (Jeff Daniels) or anyone else there, but eventually Capote's ability as a raconteur wins the citizens over. Soon two men are arrested for the crime, and Capote is intrigued with their background as well as that of the Clutter family. He then begins shifting his view from an article to a full book, taking the devices of a novel but using factual details to create a new style of reportage: In Cold Blood. Capote soon develops relationships with the two convicts, but the one with Smith grows to an especially intense one between them both.

It ends with the success of In Cold Blood...but the emotional destruction of Capote.

The performances from all the cast are incredible. Jones has the hurdle of being British, and his transformation to this feisty fey American with a Southern accent is simply amazing. It is cliché but it is true: at times you can imagine the real Capote has come back to play himself. Jones never hits a wrong note, never loses Capote's distinctive voice or inflections.

Bullock also handles her Southern accent as Lee brilliantly (and I'd argue, far better than in The Blind Side). Craig also does a remarkable turn with an American voice as the contradictory Smith, a man who has high standards in art and culture but who is also a depraved killer. The scenes between Jones and Craig go from frightening (as when Smith threatens Capote with rape) to tragic (when Smith reads Capote's description of the murders from the Clutter's point of view) to even romantic. Daniels matches them in the smaller role of Dewey, a cop who is suspicious of Capote's motives and being but who eventually is charmed and takes a liking to him.

In smaller roles Weaver, Isabella Rossellini, and Hope Davis as members of Capote's "ladies who lunch" add the right sense of style of the world Capote occupied. Pace, an actor who has earned my permanent dislike due to the just awful Pushing Daisies, is also up to par as Hickock, and though his role was small I may have to change my view on him--maybe I may end up liking him (though I'll probably always hate that show).

Writer/director Douglas McGrath (adapting a book on Capote by George Plimpton) I think did get some things wrong. There is this overarching structure where we get interview-style reflections from the characters such as Babe Paley, Harper Lee, and Capote's partner Jack Dunphy (John Benjamin Hickey). This is mostly confined to the beginning and end of Infamous, but I took issue with this on two points.

First, I didn't think they added anything specific or special about Capote--the story itself gave us a portrait of the author. Second, we not only get the reflections of those who played a major part in the film, but also from people we see only once or twice apart from their 'interviews'. This is the case with fashion editor Diana Vreeland (Juliet Stevenson) or Capote's hated arch-rival, Gore Vidal (Michael Panes). We only get to see Gore Vidal once in Infamous, and his presence doesn't add anything to the film (which is the case with Vidal in real life as well).

Second, it might be true that given Capote's voice and mannerisms he might have been mistaken for a woman, but at times this "culture clash" between Manhattan and Kansas almost played like comedy. This makes it a bit distracting to concentrate on the serious subject of murder and the creation of a literary tour de force.

These are generally minor points that don't take away from the intelligence of Infamous. Solid performances and an intelligent take on the story of the creation of In Cold Blood and how it affected both subjects and author make the film both entertaining and informative. Truman Capote may have filled every negative stereotype of a homosexual man, but Infamous makes him a fully-rounded figure (pun slightly intended).