During X-Men: Apocalypse, some of our junior mutants are seen leaving a screening of Return of the Jedi.  One of them, Jean Grey, makes the witty comment that 'the third part is usually the worst'.   Accompanying her was a character identified as "Jubilee", though through the course of X-Men: Apocalypse we don't hear that name said or see said character do anything that is relevant to the plot.

This in short reveals one of Apocalypse's myriad of problems.

Perhaps the makers of X-Men: Apocalypse thought at that "third part is usually the worst" they were being cute, funny, making an in-joke.  Perhaps an homage to X-Men: The Last Stand.

Beware of taunting the audience, for X-Men: Apocalypse more than lives up to one of my Golden Rules of Filmmaking: A "Part III" Will Be Either A Disaster or the Harbinger of a Greater Disaster.  X-Men: Apocalypse goes through the motions, but it is a dead, sad affair, with a story that is boring on its own and worse, makes trying to keep continuity with the original X-Men films (let alone the two in the new franchise) all but impossible. I'll get to some of my questions regarding continuity within the overall X-Men universe later on.

In ancient Egypt, the first and most powerful of mutants, En Sabah Nur, is about to perform another quasi-Satanic rite that will give him another mutant's powers (a bit like Sylar from Heroes).  However, humans manage, at great cost, to stop him and he ends up buried alive.

Fast forward to 1983, a good ten years since the events of Days of Future Past and twenty-one years since those in First Class.  The constant struggle between Professor Charles Xavier (James McAvoy) and Erick Lehnsherr aka Magneto (Michael Fassbender) continues, though for the moment there is détente. Charles is still at this School for the Gifted, working to have humans and mutants coexist (and rocking some era-appropriate Miami Vice-style threads).  Erick is hiding out in his native Poland under an assumed name, with a wife and adorable little girl.

If you've seen movies, you can imagine what will happen to the villain/antihero's wife and adorable child.

Also at work is Raven, better known as Mystique (Jennifer Lawrence), attempting to find mutants and take them to Charles' school, though she wavers between the Xavier and Magneto worldviews.  One of those she rescues is Kurt Wagner, aka Nightcrawler (Kodi Smit-McPhee), a mutant who can teleport.  She gets him from a cage match where Nightcrawler is forced to fight Angel (Ben Hardy), who has large wings.

Thanks, in part, to CIA Agent Moira McTaggart (Rose Byrne), En Sabah Nur has reawaken.  He now goes by Apocalypse (Oscar Isaac) and is going to force all, mutants and non, to submit to his will and turn from the 'false gods'. His first recruit is Ororo Munro (Alexandra Shipp), a mutant who can control the weather.  He also picks up another mutant (to be named later), Angel...and Magneto, affording him a chance to avenge both his wife/adorable child but his parents killed at Auschwitz.

There is also the matter of Scott Summers, soon to be known as Cyclops (Tye Sheridan), who has a literal meltdown when he finds that his eyes can emit fire.  He's the high school-age brother of Alex Summers, better known as Havok (Lucas Till), who worked with Charles Xavier to stop the Cuban Missile Crisis, along with one of the top teachers at Charles' school, Hank McCoy aka Beast (Nicholas Hoult). Scott meets and somewhat bonds with Jean Grey (Sophie Turner), who works to keep all her mutant powers controlled/hidden.

Apocalypse becomes aware of Charles Xavier's great powers and wants them in the ultimate weapon to TAKE OVER THE WORLD and will stop at nothing to get at them.  Those not part of Apocalypse's "four Horsemen" will also stop at nothing to prevent this from happening, even if in the case of Havok, it costs them their lives.  Aiding in all this are not just all the aforementioned figures, but also Peter Maximoff or Quicksilver (Evan Peters), who not only has super-speed but is Magneto's illegitimate child.

Apocalypse has decided that it is his time, and that Charles' powers must be transferred to him in a revived quasi-Satanic rite.  Only with the uniting of all the others, fighting against the forces of darkness will they save all from the massive destruction that Apocalypse and his minions are wreaking.  Magneto, the most moral of the Four Horsemen, turns on his master, and they all manage to destroy Apocalypse.

X-Men: Apocalypse, is one of if not worst comic book-based films of 2016.  Nowhere near the horror that is X-Men: The Last Stand, Apocalypse suffers from other maladies: being boring, chaotic, and in so many ways indistinguishable from others in the genre.

Whole things that don't make any sense are thrown in just to have characters put in.  First, let's look at Jubilee.  Not once was her name used, or her powers shown, or given anything to do.  In Apocalypse, she had no reason for being there at all.  She served no purpose story-wise, and worse, she wasn't even there for fan-service precisely because she didn't get a name check.

Let's now go over another flat-out bizarre situation: that of the Summers Brothers.  First, a little math.

Further estimating that Scott was a junior in high school at the time of Apocalypse, with a birth year of 1966 (making Scott 17 years old in 1983), we have a situation where Alex Summers is theoretically old enough to be Scott Summers' father!

I'm not well-versed enough to think about things like age gaps between mutants or whether being a mutant preserves you so well, but this playing fast-and-loose with time and characters just makes things a bit muddled for me.  I do leave it up to other people, more seasoned than I on mutant matters, to try and sort this out for me.  I'm sure I just missed something.

One thing I didn't miss was the lack of performances from most of the cast. Out of all the returning cast, I think Lawrence was the worst.  She had simply awful delivery in almost every scene, looking bored and desperate to get out of this (and desperate to not get into her Mystique paint given that she appeared as Mystique a total of two and a half times versus looking like J-Law almost all the time).  Fassbender at times looked equally bored, which I figure he thought was showing him as 'sad' and 'tragic', but there didn't seem to be much reason for him to join or abandon Apocalypse.

Let me now touch on Psylocke (Olivia Munn).  What was HER reason for joining Apocalypse, or being the last one to remain loyal to him?  Did she have any lines of great importance?  Apart from showing off the latest style in S&M wear, did Psylocke do anything of great importance in the film?

The same for Angel, who did nothing in the film and worse, had a great dramatic moment stolen from him.  Apocalypse gifts him with metallic wings, but what could have been impressive, even thrilling was not thanks to the decision to have such dark cinematography that one almost can't see what is going on.  What could have been a fantastic moment ends up leaving no impression. 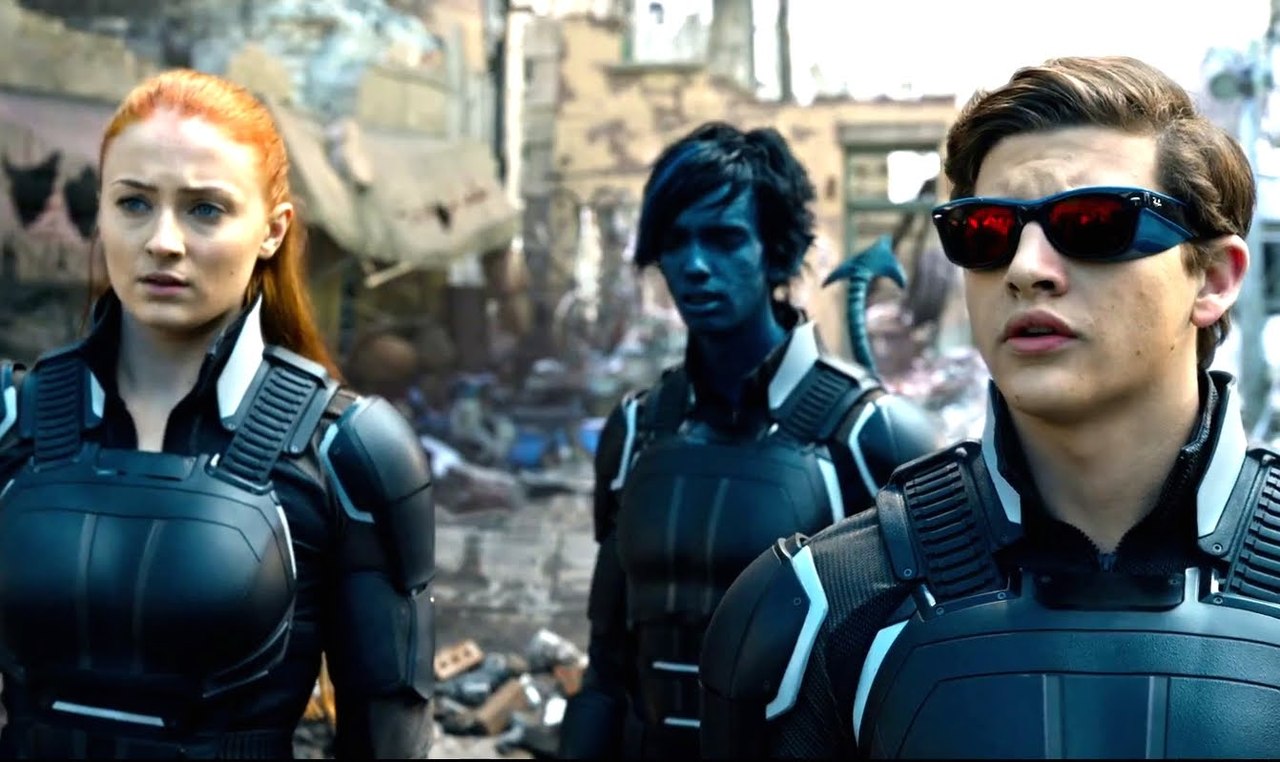 The sheer failure of X-Men: Apocalypse is more disheartening given that some of the newer members actually gave good performances.  A particular highlight was Sheridan, showing that he not only can do drama but can handle action pictures on this magnitude.  His Scott Summers was a real figure, one who had anger about what he considered a curse until he saw that it could be a force for good.

Smit-McPhee did a credible German accent and was more endearing than annoying as the put-upon but still somewhat naïve and innocent Kurt.

Turner's Jean Grey was a conflicted character, and it's credit to her that she made the most of her time.

Sadly, the worst is Isaac as our titular villain.  I don't blame him, but blame writer/director Bryan Singer for not just encasing him in so much makeup you could have had anyone play (or overplay) another boring megalomaniac power-hungry villain, but also for telling him to deliver his lines in such a portentous manner that it comes across as the worst of monologuing.  This super-villain ends up coming across as the title character in the fictional film The Mummy Returns Again.

Actually, a lot of people were directed by Singer to deliver their lines in a heavy-handed manner, so again Isaac isn't at fault for how bad this was.

Too much of Apocalypse is repetitive of both other X-Men films and comic book-based films in general.  Quicksilver's saving of everyone as the school is about to explode is almost beat-for-beat a redo of the same situation in Days of Future Past (substituting Sweet Dreams for Time in a Bottle), but what was once exciting and plot-necessary now here comes across as rote.  It doesn't even look exciting: Peters' face looking laughable as he speeds through the school, saving dogs and goldfish.

Also, isn't it just so wonderfully coincidental that he just happened to show up at that precise moment?

The climatic battle where the Earth gets literally torn apart is just another entry in this 'let's see which comic book can destroy the world the most' contest.  We've seen in it Man of Steel, in Age of Ultron, in Batman v. Superman, and now here.  Just give it a rest.  The world doesn't have to end EVERY TIME.

What should have ended was a scene where Apocalypse uses sand to behead some thugs.  For a PG-13 film, I thought that moment was rather grotesque and not obscured enough to not push it to an R.

Suffice it to say X-Men: Apocalypse is just another big, loud, comic book-based films that doesn't expand on what came before or add anything interesting in and of itself.  Apart from the younger set of Sheridan, Turner, and Smit-McPhee (who should have gotten their own movie), X-Men: Apocalypse is the weakest entry in the revived franchise.  The fact that it doesn't rank lower is less about this film and more about the weakness of the others.