Jarvis Tetch (Benedict Samuels), better known as The Mad Hatter (though as far as I can remember no one has yet to use this name for him) is plotting his revenge on Jim Gordon (Ben McKenzie) for the death of Jarvis' sister, Alice.  As part of this scheme, he hypnotizes a young albino man (Kieran Mulcare), who for purposes of keeping things all Lewis Carroll-connected is The White Rabbit.  As part of Tetch's insane scheme is to make Gordon constantly choose who will live and who will die.

Tetch's first victims will be either a child who will be run over by a truck or a newlywed couple perched on the ledge of a bridge.  Gordon chooses the child, which means the happy couple jumped to the deaths.  Next, Gordon is taken to an abandoned powerhouse where he is given a more sadistic choice connected to two of Gordon's lovers: his former love Dr. Leslie "Lee" Thompkins (Morena Baccarin) and current mistress Valerie Vale (Jamie Chung).  One is a doctor, one a reporter...which is why Tetch wants Gordon to choose which of the two men he has in electric chairs will live: Gotham's most respected pediatrician or Gotham's favorite news anchor.

Gordon will not choose, and despite the arrival of the GCPD they are all powerless to save both men.  Worse, Tetch has abducted both Thompkins and Vale in an effort to get at Gordon.  Gordon, with some help from the White Rabbit (still in the throes of hypnosis) and Thompkins' fiancée Dr. Mario Calvi nee Falcone (James Carpinello), he goes to Thompkins' home to find them both as hostages.

In rhyme and without reason Tetch keeps taunting Gordon to choose until he finally says, "Kill Lee".  Tetch, being Mad, shoots Vale instead.  Tetch, satisfied, flees into the city, with Thompkins, Gordon, and Calvi rushing to save her.

In our subplot, Penguin (Robin Lord Taylor) has decided to tell his Chief of Staff Edward Nygma (Cory Michael Smith) that loves him.  I figure this is that "love that dares not speak its name" style.  Pengy keeps stumbling in his efforts to confess his feelings for Nygma, but will do so while dining together in the evening.

As Nygma is shopping for wine for this dinner, he meets a woman who looks eerily similar to his former love, Miss Kringle.  Calling herself Isabella (Chelsea Spack), she seems instantly attracted to Ed.  "There's just something about you," she tells him.  The fact that she has a fondness for riddles helps to. 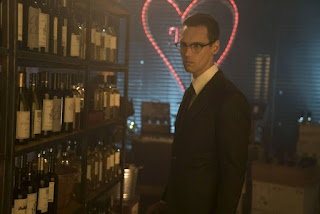 Maybe it's just me, but Isabella, bearing a near-complete similarity to the much-loved/missed Miss Kringle and emerging as if from the dead gives this new story a very Vertigo-type feel.  I wouldn't be surprised if Gotham took inspiration from the Hitchcock classic (and a great way to bring Spack back...no rhyme intended).  Who is this Isabella?  A twin?  A mere lookalike?  A figment of Nygma's imagination?  A random woman?  Something else, something more?

We'll have to see, as this subplot is going to get played out more.

We now have a most curious detail with Penguin essentially coming out as gay on Gotham.  Given that Pengy has never had any real romantic or even sexual urges on the show (and apart from his romanticizing his mother to the exclusion of everyone else), this call for him to declare that he's in love with anyone (man or woman) strikes me as well, curious. Another time I think I might put in my own thoughts on Nygmobblepot (the romantic/sexual pairing of The Penguin and The Riddler that floats about in many a fanfic but which up till now hasn't been made Canon).

For the moment, while this doesn't completely come out of nowhere, I am not convinced that this storyline is good for the series.  Penguin has up to now given no indication that he has any sexual/romantic urges or desires, straight or gay.  Edward Nygma is at the moment straight, and there isn't any indication that he is perhaps bisexual.  With this new twist of Kringle Deux, I suspect Nygma's sexual urges will continue being directed towards women.

However, all that really is for another time.  Suffice to say for the moment that this doesn't seem to be something of interest to me.  That goes for the whole "criminal mastermind taunts hero with choosing who lives or dies" bit that dominated Follow the White Rabbit.

Again, I didn't hate this episode.   Far from it, for it has many positive attributes.  Chief among them is both McKenzie's performance as Gordon and the focus of exploring his dark psyche.  Samuels was also quite strong as the Mad Hatter (even managing to spout off rhymes without it coming across as ridiculous).  "Lies!  Deceit!  The story you tell is incomplete!" he shouts at Gordon when Jim discusses Tetch's incestuous relationship with Alice without using the term 'incest'.

While the line delivery/performance was good, the idea of bringing such a sordid subject up makes me queasy, as does the almost sadistic violence on this particular episode.  Torture, killing of innocents, those kind of things don't sit well with me.

There were great moments of comedy (the ever-efficient Ed preparing two itineraries for Oswald: one list for Mayor, one for Kingpin of Underworld) and drama (Penguin offering curious advice to a child named Luke, sitting alone in a school on how to make friends, "if they don't like you, wait until their backs are turned...and push them down the stairs").  I also liked how well Gotham is integrating those larger-than-life criminals while still holding something of a semblance of reality (having "the White Rabbit" as part of that "Alice in Wonderland" motif doesn't make it look idiotic or silly).

Still, while I didn't dislike the episode, I wasn't crazy for it either.  It teetered somewhere in the middle for me, so I'm giving it a mild recommendation, but wonder where we'll end up both with the Mad Hatter and Nygmobblepot.