The Librarians: And the Rise of Chaos Review

THE LIBRARIANS:
AND THE RISE OF CHAOS

For Season Three of The Librarians, we seem to be moving away from the literary whimsy of Season Two and now are delving into Egyptian mythology and nefarious government agents running about. And The Rise of Chaos sets up the season with a so-so episode that has its positives (The Librarians: The Musical?) but that as independent episode I think won't go far.

The various Librarians are working pretty well together, having gotten into a routine where they continue finding magical artifacts and keeping them safe within the Library.  Things take a heady turn when The Clippings Book, the book which leads them to their investigations, spontaneously combusts.  Head Librarian Flynn Carsen (Noah Wyle) tries to play it off, but he realizes that this is a big deal.  The Caretaker of the Annex, Jenkins (John Larroquette) surmises that the Clippings Book was so overwhelmed with information that it couldn't handle things.

It all leads to Boston, where we learn of the machinations of our newest villain, Apep, the Egyptian God of Chaos also known as the Eater of Souls.  It is in Boston where a portal exists that will help Apep unleash Pure Evil in the world.  As it stands, being in Boston causes problems for our Librarians.  The guys, Jacob Stone (Christian Kane) and Ezekiel Jones (John Kim) want to go explore the submarine next to the Boston Science Museum, but both The Guardian Eve Baird (Rebecca Romijn) and Cassandra Cillian (Lindy Booth) couldn't care about it.

Apep has taken over the body of a former Navy man who was touring Egypt, and he uses his skills to try and find the portal via that submarine.  As the God of Chaos, he is master at bringing dissent to anyone working against him, and soon the Librarians are at each other about things.  It isn't until Flynn realizes that to defeat chaos, they need harmony.

And BOY do they deliver harmony, by doing an impromptu a cappella version of Battle Hymn of the Republic!  This so puzzles Apep that he lets his guard down long enough to be defeated (at least for now) and manages to outwit DOSA: The Department of Statistical Anomalies, headed up by the mysterious General Cynthia Rockwell (Vanessa Williams).

With Apep temporarily out of the way, and the other Librarians toying with forming a musical group (suggested names: The Dewey Decimals or Bibliotechnos...I like the latter), Flynn and Jenkins fear for the worse, an upcoming battle between good and evil. 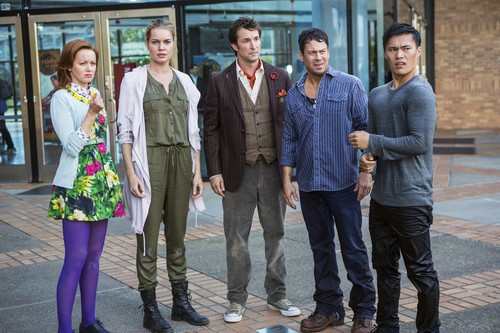 I wasn't strictly disappointed with And the Rise of Chaos.  It has a lot of what made The Librarians such a successful and enjoyable weekly romp.  It's breezy, doesn't take itself seriously, has a rapid-fire pace where quips come fast and furious, and even throws in some really out-there moments (that sing-along).

What And the Rise of Chaos has is a slight hitch in introducing what I presume is our villain for the season.  Having a swarm of darkness infiltrate a human isn't the same as when we had the Fictionals in Season Two.  There, both Prospero and Moriarty were allowed to develop in that hour.  Here, Apep really has no personality, nothing that makes him either menacing (like Prospero) or menacing yet humorous (like Moriarty).

Granted, this is just the first episode, but I was a bit underwhelmed with the introduction of our villain.

I also wasn't sold on our DOSA antagonists.  It's not a slam on Williams (though she wasn't even the primary human antagonist).  It's just that the DOSA agents were a bit too Men in Black/Keystone Kops to be of great interest.

Delving deeper into things, the scene at the museum where the janitor is attacked by the mannequins is clearly a (rip-off/homage) to the Autons from Doctor Who, particularly the first episode of the revived series (Rose).  A previous nod to Doctor Who on The Librarians (a quick shot of what could be the TARDIS with a faint lift from the Doctor Who theme) was a nice touch.  This one, more overt and blatant, struck me as less fan-service and more straight-up copy.

As much as I now dislike Doctor Who, this sequence veered dangerously close to being a shot-for-shot remake which didn't go over well with me. And the Rise of Chaos does keep a lot of what made The Librarians a great, rollicking frolic.  The cast continues to work well, each character showcasing what makes them unique and endearing.  We get a lot of humor (when speculating on forming a band, Jones points out that they have instruments at their disposal: Pan's Flute, Gabriel's Horn...and Mozart's Piano).

One thing that I was pleased with is how Wyle's Flynn Carsen worked within The Librarians without being the center of things.  Given how he had in the past either been out of the picture altogether or intermittently in the show, a worry had developed whether as the original Librarian he would become the de facto star of the series that the Carsen-centered television movies created.

I'm very pleased that far from taking center stage, both Flynn and Wyle shared the stage with everyone else.  Granted, he was the Head Librarian and as such people tended to defer to him, but on the whole Flynn has been well-integrated within The Librarians (emphasis on the plural).

However, this beginning is if not the weakest one at least the one that didn't pay off as well as others.  It served as a way to introduce two story elements for the season: DOSA and Apep. I hope that the rest of the season builds on And the Rise of Chaos, but builds up something stronger.

Next Episode: And the Fangs of Death
Posted by Rick at 1:30 PM