Well, 2016 will go down as The Year of The Sequel, where the film market was flooded with Parts 2, 3, 4 or more of films that either we knew were coming (who wasn't aware that there would be more entries in the Marvel Cinematic Universe) or that one wouldn't have expected from the first film.  A good (or bad) example of this is Now You See Me 2: a sequel to a movie that to my mind wasn't having America clamoring for more stories of The Horsemen.

Never ones to stay behind for long, the Christian film industry has decided to be imitators of the World by bringing us God's Not Dead 2.  This sequel to the surprise hit God's Not Dead can be called a cash-grab.  It can be called a weak and/or pale imitation of the original (whose connections to it are tenuous at best).

Yep, let me call God's Not Dead 2 all that, and so much less.

Teacher Grace Wesley (Melissa Joan Hart) is a Christian who has a pretty strong, positive outlook on life.  She invigorates her history class with games and activities, but then runs afoul of parents and the school administration when a student asks her about Jesus Christ and any similarity between the teachings of Christ and the actions of Mahatma Gandhi and Martin Luther King, Jr.

Grace's measured answer (going so far as to say 'the author of Matthew' as opposed to just 'Matthew') doesn't sit well with at least one student, who sent a text to someone, who in turn got in touch with school officials.  The fact that Grace quoted Scripture at all is cause enough to suggest she was proselytizing and thus should be dismissed.  As it happens, she's a union member, so she gets a union-paid attorney.

Tom Endler (Jesse Metcalfe) is not a Christian, but he is willing to take the case (or rather, is assigned the case by the union).  His only interest is in winning, and questions like faith are of no interest.  Come to think of it, the case isn't either: with a permanent stubble and slightly disheveled look, Tom is no one's idea of Perry Mason.

The prosecution is Peter Kane (Ray Wise), who I think is with the ACLU and wants to prove once and for all that 'God is dead'.   As this goes to a jury, the jury selection process ensnares Pastor Dave (David A.R. White), the minister from the last film.  He doesn't want to be on the jury, nor does he want to answer the 147+ questions new believer Martin Yip (Paul Kwo), also from the last movie, has.

However, serve he must, and as the trial continues we can see he has troubles of his own.  The city has now requested that pastors hand over copies of their sermons for review, and Pastor Dave, not the most enthusiastic of people, submits a letter stating he won't turn his sermons over instead.

At the center of Grace's trial is Brooke (Hayley Orrantia), a girl who lost her brother and is searching for answers.  Her parents would sooner brush their son's memory under the carpet, but Brooke is still struggling with his death.  She discovers that he has been reading the Bible and come to accept Christ, but never told his humanist parents before he was killed in a car accident.  Brooke too accepts Christ and sides with Grace.

Dave (as a pastor the juror everyone thinks would be most sympathetic to Grace) suffers appendicitis during the trial, forcing him to go to the hospital and bringing in an alternate.  Tom brings in Biblical experts like Lee Strobel and J. Warner Wallace (playing themselves in cameo roles) to argue that Jesus was a historic figure and thus an appropriate subject in a history class.  Brooke's dramatic testimony for Grace backfires when Kane uses her testimony to suggest that Grace has been trying to convert her.

Tom, finally clean-shaven and well-dressed, takes a dramatic step by putting Grace on the stand and making her a hostile witness.  Her tearful testimony about how she could not deny Christ has enough power to sway the jury to rule in her favor (and Grace is surprised to see that the alternate juror, who looks like a punk rocker, has a cross tattoo on the back of her neck, suggesting that despite appearances she is a Christian).  Covering the trial is Amy Ryan (Trisha LaFache), also from the last movie, a former atheist who is now in remission from the cancer that caused her a crisis of faith.

In a post-credit scene, Pastor Dave is arrested for not turning his sermons over. 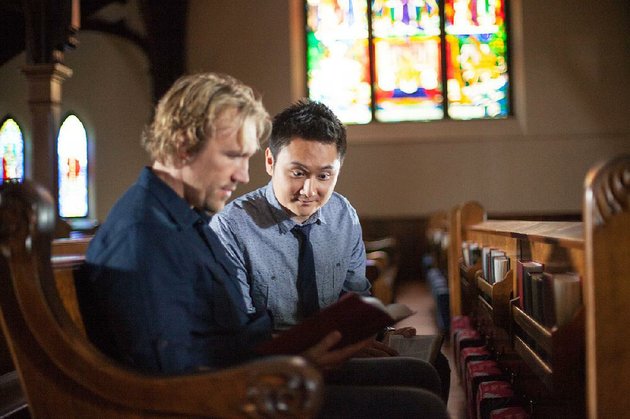 At first, I was disposed to be gentle towards God's Not Dead 2 (and despite what I heard somewhere, giving this movie the title God's Still Not Dead sounds a bit silly, almost deliberately blasphemous and taunting).  It wasn't until the post-credit scene that I finally decided that it was one step too far for me.

I've always been an 'art before theology' reviewer (in the interest of full disclosure, I am an evangelical Christian).  As such, when a film is weak, I will call it as such even if I were to find it from fellow believers (few people have been as hard on the Kendrick Brothers as I have been).

This post-credit scene bothers me for two reasons.  One, it suggests that there will or could be a God's Not Dead 3 (which to me is flat-out insulting in that it violates one of my Golden Rules of Filmmaking: Never End Your Movie By Suggesting There Will Be A Sequel).  Even if I could live with this kind of open ending, the fact that it couldn't be included at the end of the movie itself rather than have it be a tease after the credits roll (despite the fact that this scene is featured in the trailer) meant that people who left during the credits would miss this and leave puzzled as to why Pastor Dave's arrest wasn't in the movie.

It's one thing for a Marvel movie to have a post-credit scene (even if I personally don't like it).  That's been established as part of their repertoire.  It's another to have it in a film that attempts to send a message about courage of your convictions.

There is plenty that sinks God's Not Dead 2.  First and foremost are the performances.  Director Harold Cronk (who returns along with cowriters Chuck Konzelman and Cary Sullivan) brought some shockingly bad moments and led the few good actors in the mix into showing all but no or one emotion.  Hart, who can act, is perpetually sad despite her character supposedly being an optimist.  Metcalfe is pretty, but his turn as a dramatic attorney feel so amateurish.

Kwo still cannot get past that eager persona he had from God's Not Dead (apart from a scene where his father makes an unexpected appearance who ends up slapping his son when Martin refuses to deny Christ).  A quick mention of Josh Wheaton appears to tie things together (and explain Shane Harper's absence), but wouldn't Martin and Pastor Dave know each other by now?

As a side note, other elements from the first film (like the Muslim convert who got kicked out of her home) never get a mention.

Subconsciously or not, the casting of Wise as the 'evil' lawyer was a brilliant move.  I don't know if the producers were aware that Wise literally played the Devil (in the short-lived television series Reaper) and the incestuous demon-possessed murderer on Twin Peaks (sorry if that's a spoiler...Laura Palmer was killed by her father while under the control of a demon).  Who better to play the antagonist than the Devil himself (unless it's Tom Ellis from Lucifer, but I digress).

Wise, along with all the actors save White, show why God's Not Dead 2 is a weak film.  There's no subtlety in their performances (Wise, for example, is always evil with a capital E).  This lack of subtlety pushes the film down, as a more deft touch, a more nuanced way of presenting the case (figuratively and literally) would have gone a long way.

It's interesting that White, the most openly-Christian of the cast (one who has had a long history with the Christian film industry) is the only one who appears to be a real person.  That is because Pastor Dave has flaws: he's cynical, jaded, slovenly, sometimes cranky but beneath that a man of deep faith.

Pastor Dave is allowed to be human.  Everyone else appears to be a walking symbol.

Some moments are downright hilarious (Brooke's sudden emergence to the court should have people laughing at how clunky it was).

It's a real shame because some of the points that the film makes (such as those from Strobel and Wallace) would perhaps be better received if presented in a better forum.

There were many things God's Not Dead 2 could have done to make it a better film.  It could have focused on Martin's character as he grows in his faith with Pastor Dave helping him.  It could have brought the Pastor Dave story up-front.  Instead, by going for the trial of a teacher who, to my mind, said something so innocuous it wouldn't have raised any eyebrows, let alone a scandal, God's Not Dead 2 goes down as an unnecessary sequel.  At the very least, it could have been better, and that is perhaps the film's biggest sin.

I was going to give it a mild C-, but the post-credit scene, with its vague suggestion of a God's Not Dead 3, was too much for me.