A Heaping Helping Hulk of Horror...

Marvel seems to have the Golden Touch in adapting their characters to the big screen.  You have your Iron-Man, Captain America, even Thor.

In all of the renaissance of comic book adaptations in their vested glory, however, there is the long-forgotten figure of The Hulk.

The first feature film based on our un-jolly green giant is notorious for being the rare comic book adaptation reviled by the fans.  Hulk was a film I had avoided for some time now, but at long last, I finally sat down and watched all 138 minutes of it.

The stories are true: Hulk is bad.

The reasons why Hulk is not just a failure but a fiasco are many.  Hulk, however, is a fascinatingly flawed film that leaves one puzzled as to how a film featuring the angriest of the Marvel canon could be so quiet.

Dr. Bruce Banner (Eric Bana) is a brilliant geneticist with a dark family past: his father David, a scientist himself, performed experiments on himself to prove his ideas on DNA modification and its potential uses for warfare.  David has disappeared from Bruce's life, and Bruce struggles with his legacy.

He also struggles with Dr. Betty Ross (Jennifer Connelly), his former love and now colleague.  They want to create something for good: using Gamma rays to bring healing to injured people.  A malfunction causes a mass amount of Gamma rays to explode from the machine, the exposure which should have killed Bruce...but he remains mysteriously alive and well.

A mysterious figure appears at the lab too, and it isn't the snarling Major Glenn Talbot (Josh Lucas).  It's the long-lost David Banner (Nick Nolte), who wants to recreate his mad science experiments with Bruce as his guinea pig.  Bruce, however, has by now slipped into the alter persona of The Hulk, who cannot control himself when he becomes angry. David threatens Betty, and it's only The Hulk who can save her, even if he has no memory of what he is afterwards.

Seeing the wreckage at Ross', her father General Ross (Sam Elliot), orders Banner's arrest.  Both Talbot and David want to use Bruce for their own nefarious schemes.   Bruce, however, escapes the secret base he's being held at and creates a rampage through the Southwest desert until reaching San Francisco. It's decided that both Bruce and David Banner are too dangerous to be controlled, and need to be killed.  A final climatic battle between them leads to perhaps Bruce's death...though One Year Later, in the jungles of South America we find Bruce, telling them, "You wouldn't like me when I'm angry" in Spanish. 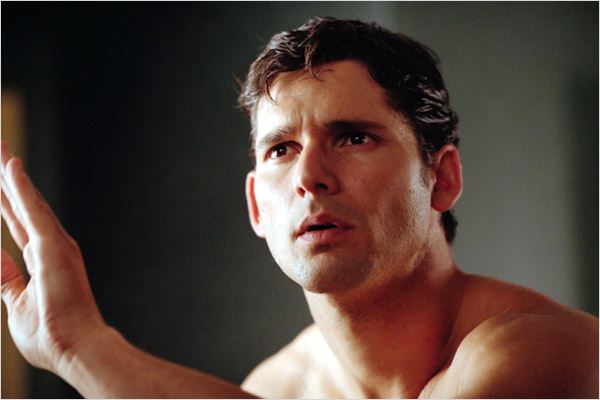 Hulk is pre-Marvel Cinematic Universe, long before critics and fans began lapping up every comic book-based character and spinning franchises around them.  It is the unspoken, unholy child in this comic book film world, that dark secret fans attempt to hide away in the attic (at least those who are aware of its existence).  Hulk is a horror of a film: a film that doesn't realize how hilariously awful it is, lost in its own sense of brilliance and homage to see how jumbled it all is.

It's easy to blame director Ang Lee, to say that because of his Asian background he had a hard time understanding the source material.  Lee can be blamed for letting his actors give some simply awful performances, some that are so cringe-inducing.  I have great respect for Eric Bana.  I even have respect for Jennifer Connelly, but their scenes together show two people who apparently are not acquainted with human emotions.

Both of them recite bad lines (courtesy of John Turman, Michael France, and James Schamus) that few actors, even the best ones, could make sound like they came from actual people.  However, their delivery is so flat, so dull, so utterly, utterly lifeless that they end up coming across as either drugged or dead.

A particularly bad moment is when David, in disguise, tells Betty about what happened to the janitor after the first Hulk rampage.  "Benny's dead.  I'm the new guy," he tells Betty, but there's not a hint of emotion from Betty.  She's just been told that someone she knows is dead, and her reaction is to have no reaction, to behave as if she were told the chicken sandwich is cold.

It's not just Connelly that has no sense of emotion, it's just about everyone.  Well, except perhaps for Lucas, who hams it up almost as a way to counter Bana and Connelly's thorough lack of emotion.

Not that this helps, because the performances are done in by Lee's very bizarre decision to recreate visually the look of a comic book.  That in and of itself isn't a horrible idea, but it's done so often and sometimes at the worst possible time.  When Talbot is killed in an explosion, we get one of those panel-like shots and Lucas' most unintentionally hilarious face.

The decision to have a comic book-type look to Hulk in their panel shots makes it look like we are seeing alternate takes of the same scene.  Soon you start trying to focus which take to pay attention to and it becomes maddening.  It's as if Lee couldn't decide what shots to use, so he said, 'Let's use ALL of them'!

Again and again we are treated to things like this, and even stranger scenes.  I think we get flashbacks within flashbacks and Bruce's dreams and/or transformations that take on a weird, psychedelic, even esoteric, quasi-mystical turn.

Certain elements were hilarious (Hulk vs. demon dogs, slipping into King Kong territory), and some make situations worse (Danny Elfman throwing big music in what I figure was an effort to make things better).

Hulk has a ridiculous story, universally bad performances, irritating multi-split screens, and nothing to make someone want to watch more stories about this Hulk.  When one character says, "You want to go home now?", I think that was Hulk giving the audience a hint.