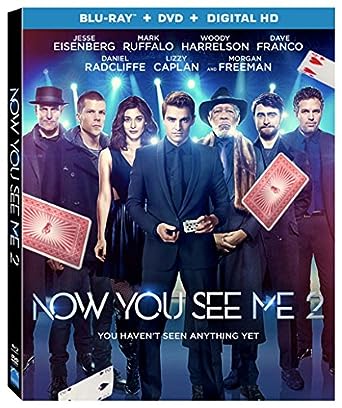 Now You See Me was a decent if not particularly good film because it was done in by one too many outlandish twists that made the whole thing too impossible to believe.   It was OK for a long time, but then it got too silly.  Now You See Me 2 (perhaps the most unoriginal title of 2016) decided that rather than take itself seriously like it did the first time around, it was going to embrace its implausibility and grandiose twists.

One year after their big farewell performance, the criminal magicians called The Four Horsemen are still waiting to emerge back into the limelight.  One of them, J. Daniel Atlas (Jesse Eisenberg) is itching to get out again and is tired of waiting for an assignment and chafes under the mastermind that is the intermediary for The Eye (the secret organization behind their machinations).  "The Eye" assures Atlas that things will go his way and that his gifts will be rewarded.

Two of the other Horsemen, hypnotist Merritt McKinney (Woody Harrelson) and card shark Jack Wilder (Dave Franco) don't seem to mind waiting for The Eye and are not about to plot a coup against Dylan Rhodes (Mark Ruffalo), the double agent who works for both The Eye and the FBI.  The Horsemen get two new things: an assignment to expose a tech conglomerate which is stealing user's private information to sell to the highest bidder, and a new Horseman, Lula (Lizzy Caplan), who is taking the place of former Horseman Isla Fisher's Henley Reeves (Fisher being pregnant at the time of production and thus unable to join the cast).

The Horsemen make their big debut at the product reveal, hypnotizing Owen Case (Ben Lamb), the tech guru to reveal the truth.  However, the trick's on them as they, along with Agent Rhodes, are the ones exposed, including Jack Wilder, who had faked his death in the last film.  In making their escape, the Horsemen inexplicably find themselves in Macau (the fact that the Chinese market is now the one major market Hollywood caters to having nothing to do with the location, I'm sure).

They are cajoled by billionaire tech genius/Case's former partner Walter Mabry (Daniel Radcliffe), who had faked his own death, to perform a magic feat of great importance to Mabry.  He wants them to steal the chip that Case had created which will allow the holder to decrypt every piece of information.  Aiding Mabry is Chase, Merritt's unknown-until-now-twin brother, a magician and hypnotist who holds a great grudge against Merritt. 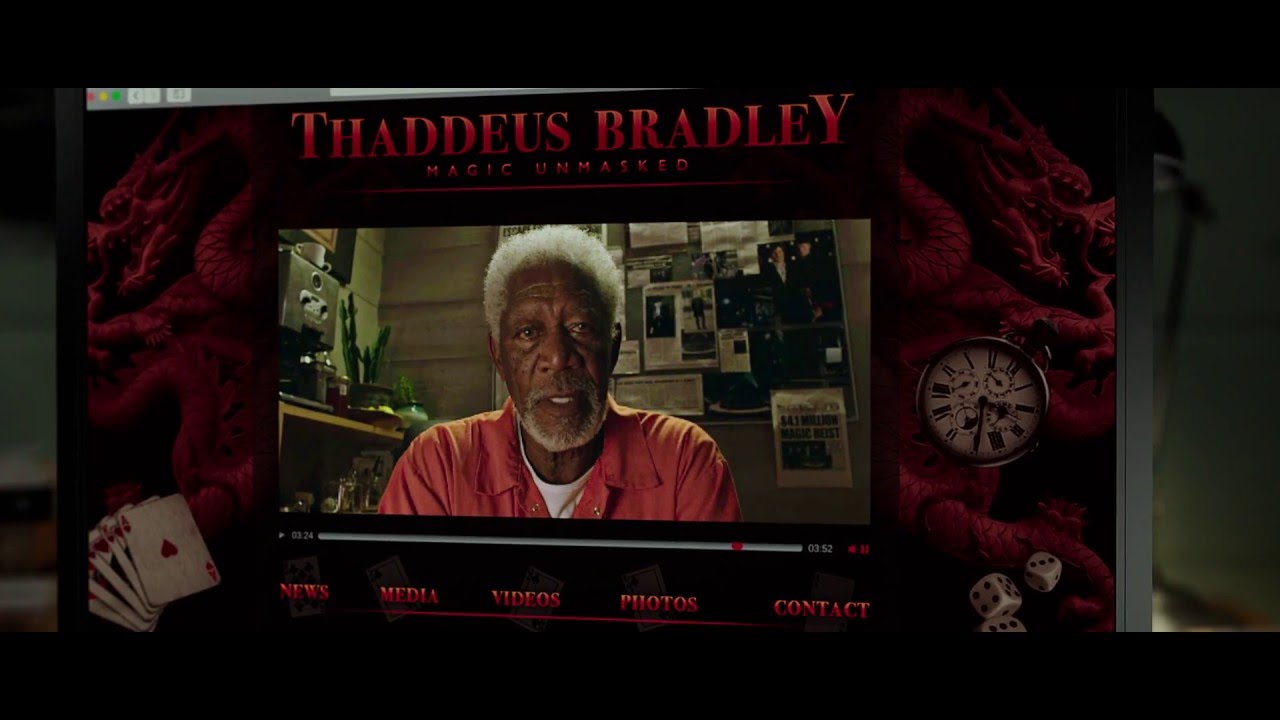 Meanwhile, Rhodes, still on the run from the FBI himself, is forced to join forces with Thaddeus Bradley (Morgan Freeman), whom they got locked up for the crimes they committed and whom Rhodes blames for the death of his father, Lionel Shrike, when Dylan's father failed in a magic act to which debunker Bradley goaded into performing.

The Horsemen manage to steal the chip, but then we get twists after twists, including one involving Arthur Tressler (Michael Caine), the fan the Horsemen fleeced last time.  It all comes to a head in London, where the Horsemen have one last trick up their sleeves that will reveal mostly all.

Even that doesn't end the film, as Thaddeus, now a free man, reveals his own secrets, and the Horsemen, including Rhodes, now may find themselves on the cusp of a new adventure, with The Eye still just slightly out of reach.

I'm not going to knock a bad movie when it either knows or at least lets on that it's a bad movie, and Now You See Me 2 is, I think, aware of itself.  That's a slight improvement from last go-round, where it was trying oh-so-hard to be oh-so-clever but only tied itself in knots with some really outlandish, even downright ridiculous situations.

Here, I got the sense that everyone involved was aware that if you looked closely, it doesn't make much if any sense.  Again like last time, Now You See Me 2 relies on what made the first one a bit of a bungle.  Too many things have to go perfectly, with no room for error, to make things even plausible, let alone believable.  For example, the fake Eye gets Atlas to inadvertently reveal information by putting his phone down on what he thinks is a mere flat surface but which is really a decrypting device.

What if he'd done what I would have: put his phone in his pocket?  How'd then would the fake Eye get the information it wanted?  Another plot point is to hypnotize Chase, and that's done by him bumping into whom he thinks is a hobo but who turns out isn't.  What if Chase hadn't bumped into this figure, or not even paid attention?  When the Horsemen are exposed at the product launch, again having Wilder and Rhodes exposed at the precise moment they appear is all too neat.  When the Horsemen reveal themselves on various London streets performing their acts, or in Las Vegas for the tech launch, I kept wondering why no police ever bothered to try and arrest these fugitives right then and there.

It stretches believability, even in a magic act.

Putting aside the sheer illogic of the plot, Now You See Me 2 doubles down on some really awful and/or silly performances.  Radcliffe, I figure, is attempting to really branch out, but his 'psychopath' role makes him instead come across as the silliest and weakest villain, one who makes Blofeld in drag from Diamonds Are Forever more menacing.  Come to think of it, Blofeld's pussy would make a more menacing antagonist than Radcliffe, who here is still too much of a kid to be thought of as some sort of murderous lunatic or evil character.  Even with a full beard he still comes across as a kid trying to play at menacing and failing every step of the way.

When he has his minions fighting off Rhodes and Atlas, one can almost hear the "POW" and "BAM" from the Batman TV show.

Caplan came across as annoying and just silly as the newest Horseman, making one wonder why this novice would be thrown into this highly dangerous assignment.  From her first scene what she tries for is 'adorkable', but instead ends up as 'insufferable'. 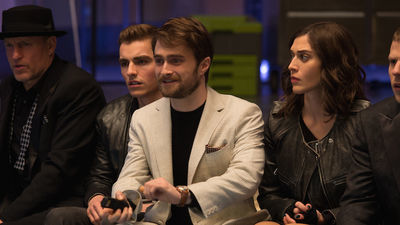 Bless Ruffalo, Caine, and Freeman for not having great interest in keeping their reputations when an easy check comes their way.  I cannot say whether they took any of this seriously, but I figure even if they didn't have fun making the film, they had no problem taking the money and running.

As a side note, the age gap between Michael Caine and Daniel Radcliffe is 56 years.  Make of that factoid what you will.

Harrelson, however, probably did have some fun doing that whole 'twin' business.  Chase, unlike Merritt, had a full head of hair, bringing to mind when we find out that Mr. Rumbold on Are You Being Served? has a twin brother.  The bald manager of the Men's & Ladies Apparel Department greets his brother, who removes his hat to reveal a massive amount of hair.  Laughter ensues, but at least in that instance it was meant as a joke.  Here, one isn't sure.

Eisenberg, figuring that he shouldn't change his method, continues giving the same performance he gives in every Eisenberg film: that of the rapid-fire obnoxious fellow who thinks he's always smarter than you.

Again, only Franco is worth mentioning of a performance, though I won't go to bat for him.

It isn't as though Now You See Me 2 is all awful.  The stealing of the chip, with all the 'will the guards catch them or not' twisting and turning of playing cards to misdirect the guards is flashy if nothing else.

Again, in all this I never got the sense Now You See Me 2 took itself seriously.  It is by no means a romp, but it isn't about to get as serious as it was the first go-round. Perhaps this is why I'm not as harsh on it as others have been.

Still, in the end Now You See Me 2 relies on the same bag of tricks: generally one-to-no-note characters, outrageous twists that don't stand up under scrutiny, plot points that come and go at whim (the FBI are remarkably inept to not figure on the mole) and a vague suggestion of another sequel.  I won't lie: I found Now You See Me 2 entertaining.

Not good, but entertaining, in a 'you-don't-think-about-it' kind of way.