The Librarians: And the Tears of A Clown Review 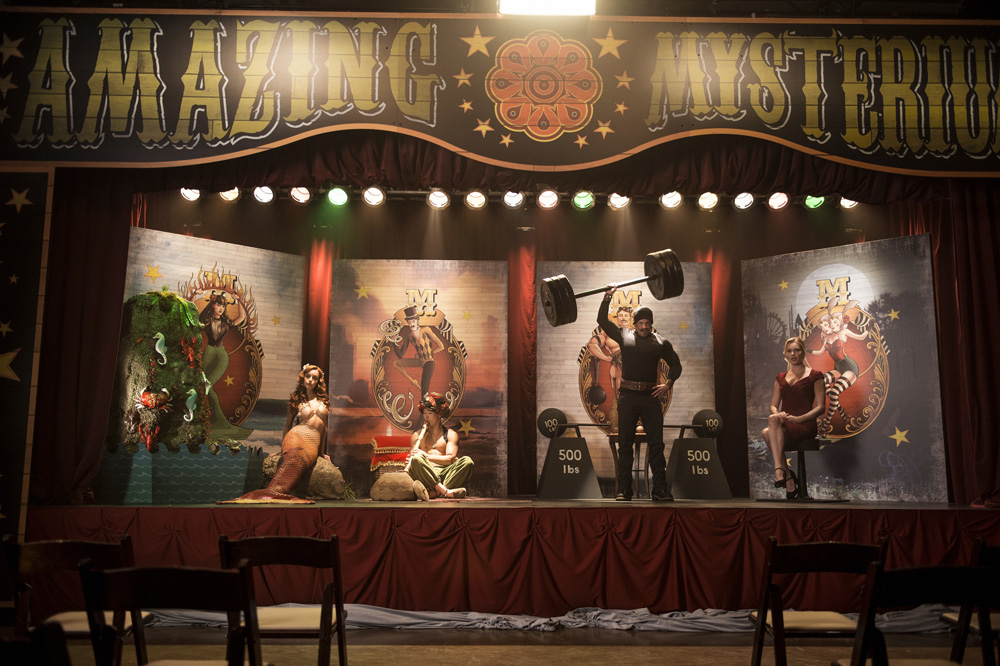 THE LIBRARIANS:
AND THE TEARS OF A CLOWN

And the Tears of a Clown has two elements that are sure to provide frights: clowns and kooky carnivals.  This Librarians episode is a bit more intense than usual, with various sideshow freaks, killer clowns, and our villain meeting a slightly gruesome end.  However, there's enough of the traditional humor to keep it from slipping into true American Horror Story mode.

Like last episode,  we again start in the middle of the story.  Jenkins (David Larroquette), who rarely ventures outside the Annex, finds himself in a mysterious carnival that just appeared out of nowhere, his only clue being a message on a cell phone from Guardian Eve Baird (Rebecca Romijn), frantically warning Jenkins not to come to the carnival.  Come though he does, concerned over where the other Librarians went to.  His concern grows when he sees that many of the staff are under a spell, blankly remarking "Welcome to the Greatest Carnival on Earth".  Only a precocious child (Elisha Henig) serves as unofficial guide into the bizarre carnival, even helping Jenkins escape killer clowns.

Finally managing to scare the child away from the carnival, Jenkins is shocked to find the Librarians and Eve are now sideshow attractions.  Eve is a two-headed lady, Jake Stone (Christian Kane) a strongman, Ezekiel Jones (John Kim) a snake charmer, and Cassandra Cillian (Lindy Booth) a literal mermaid (one who can only squeak).  Jenkins manages to break the spell enough to get them out (though Eve is still two-headed, with her second head being rather randy about Jake's muscles and Jones' abs), and are restored when they get to the Annex.

They attempt to reconstruct what happened, and soon things start coming together.  It is all connected to The Amazing Mysterium, who created the carnival and the 'insane clown posse' (in Jones' words).  The Master of Ceremonies is really Kirby Goulding (guest star Sean Astin), a formerly mediocre magician who in a sudden turnabout has become one of the most powerful of magicians.  Jenkins correctly deduces that Goulding is both very new to magic and very dangerous. 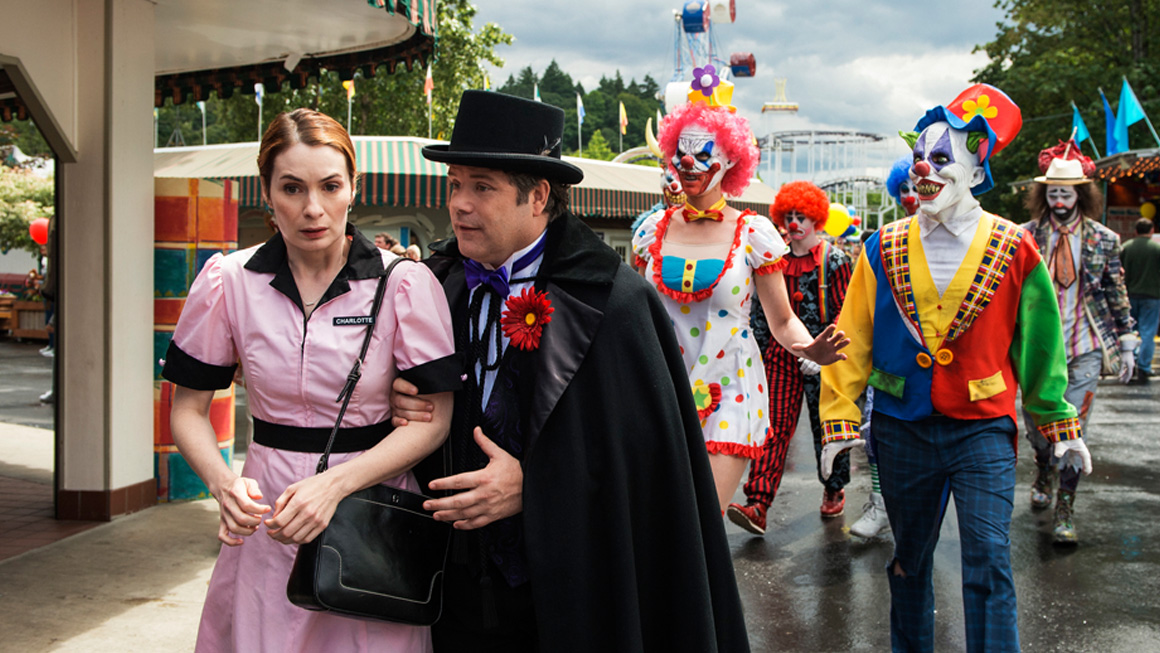 The Amazing Mysterium has been creating this carnival due to a Charlotte Holloway, his long-lost love.  Every time a "Charlotte Holloway" is found by his minions, he brings the carnival in his deranged effort to recreate one magical night from his high school years in 1996 (which makes me feel old, but I digress).

Unfortunately, he hasn't found THE Charlotte, and the poor wrong Charlotte ends up hurt somehow.  Is it me, or is And the Tears of a Clown taking a page from, of all things, The Terminator?

Now, it looks like he's found the right Charlotte (Felicia Day), a waitress who is in hard times, and at first she is slightly delighted to have won a free pass and personally guided tour of the carnival.  However, her slight delight turns to fear and sadness when she's virtually held hostage by Kirby, desperate to get her love.  The Librarians attempt to steal what they believe to be the artifact that grants Kirby his powers: either his wand or his cape.  Not only do they botch that snatch-and-grab, but it turns out neither is the artifact itself.

Charlotte dispels Kirby of the idea that she left him that fateful night (she had gone to get tickets for a show when she left and couldn't find him anymore), and tells him she thought he was cute then and that she liked him back in the day.  However, she firmly rejects his offer to stay with him. Why, he asks.  "Because you're a total psycho," she replies.  Enraged, he threatens to turn all the Librarians into waxworks, until Charlotte manages to secure the actual artifact.  Kirby attempts to retrieve it, but ends up in the wax he was planning to use against them himself.  With reality restored, the artifact is housed in a new wing of the Library, and DOSA agents (Department Of Statistical Anomalies, the government counter to The Librarians), begin their own slightly bungled investigation.

I wonder about an episode that prominently features menacing clowns and a man plunging to his death into a vat of wax.  It might have been Jones' intent that Kirby fall into the vat (he held up the magical artifact tauntingly over the vat), and made it look like dropped it in (which caused Kirby to dive in after it, a natural if career-ending reaction).  In the end, it was really a slight-of-hand on Jones' part, as he held onto it all that time.

Perhaps it is too much to read into something as generally innocuous as The Librarians, and Kirby was particularly gruesome (he had no problem hypnotizing people and inducing mild tortures on them, such as juggling till they bled).  He also had his 'insane clown posse' hovering over people, so he wasn't a particularly pleasant figure.  Still, in retrospect I wonder if it not only was a bit too much and if it means not having a potentially great villain do a return guest spot.

Something to think about.

However, And the Tears of A Clown had more positives than negatives.  Guest star Astin (one of the rare 'big names' to appear on The Librarians) made Kirby into that geeky, almost perpetually flustered magician, constantly trying to recreate something that was never real to begin with.  He was more menacing than I'm used to from him and was well-impressed.

We had some wonderful moments of comedy from Larroquette (who was a delight when he investigated by himself, from his fear at being almost trapped by the killer clowns to his query as to whether the carnival offered a Senior Discount).  Kane too had a wonderful moment when he instinctively corrected Kirby's jumbled quotation from Hamlet.

"Don't correct me!" Kirby snaps, to which an equally annoyed Stone retorted, "Don't be wrong!".  If something goads at Jacob Stone, is someone misquoting Shakespeare.

I'm with you on that, brother.

Kim and Booth had little moments to shine as well (whether it was Jones' quips or Cassandra's now-unfettered wish to dress up as a clown), and Romijn managed to have a few laughs when she was two-faced (making rather innocently risqué comments about Stone and Jones' bodies...Eve, I'm SHOCKED!).

There were a couple of off things.  The Librarians brought a device to help track down the artifact which we didn't hear from again once it was taken by the clowns (though I can't remember if it was ever recovered or not) and again, that 'falling into a vat of wax' thing.  However, with a whole new wing of the Library for new artifacts, this opens the door to more magical creations coming our way.

Overall, And the Tears of a Clown was a bit darker, I daresay slightly more gruesome episode than we're used to, but still with enough humor and lightness to make it the strong family show it maintains itself to be.

Next Episode: And the Trial of a Triangle
Posted by Rick at 5:37 AM