I'd call Marion, the most recent Bates Motel episode, a classic...a classic bait-and-switch.  Perhaps it is because the shower scene from Psycho is so iconic that anyone trying for it (even the ill-fated remake) would be hard-pressed to equal it, let alone top it.  The episode is called Marion.  Those of us who know the story of Marion Crane and her visit to the Bates Motel know that she will meet a certain fate.  Bates Motel, however, opted to try something completely different.  Did it work?  Did it not work?  Will Psycho fans be surprised? Disappointed?

Marion Crane (guest star Rihanna) has at long last, checked into the Bates Motel, determined to help her lover, Sam Loomis (Austin Nichols).  Motel owner Norman Bates (Freddie Highmore) is conflicted in more ways than one.  First, he is erotically drawn to Marion (who wouldn't?), which is usually where "Mother" (Vera Farmiga) will pop up to kill the object of desire).  Second, he knows that Sam is married, something that Marion is unaware of.

The two slowly bond, and eventually Marion asks for Sam's address.  Norman has the unenviable duty to tell her of Mrs. Loomis, which Marion doesn't believe until she goes to his house and sees Sam attempting to soothe Madeleine (Isabelle McNally).  So enraged is Marion that she smashes Sam's car windows.  To make things worse, when Sam runs out to find out what's going on, he sees Marion storming off into the Oregon night...and Madeleine promptly locks him out.

It isn't just Sam who is having a bad night.  Earlier that night, Marion has opted to shower...and lives to tell the tale.  When she comes back to the motel, Norman almost hysterically helps her pack and leave, urging her to start a new life away from Sam and from her past.  She drives away with the money and won't answer her phone.  Norman answers his, where he finds an enraged half-brother/uncle Dylan (Max Thieriot), furious about not being told Norma was dead.  Dylan insists Norma wouldn't have committed suicide, but Norman won't budge.

Into all this enters one Sam Loomis.  He goes to the motel to find Marion, hoping to do something.  She isn't there.  After the awful night he's had, he opts to take a shower too.  Unbeknown to him, Norman continues his argument with "Mother" (i.e. himself), him struggling to admit she isn't there.  "Mother" reminds him that Sam is like Norman's father, a cruel man who abuses women.

With that, Norman takes a knife, goes to Room One, and stabs SAM in the shower to death. 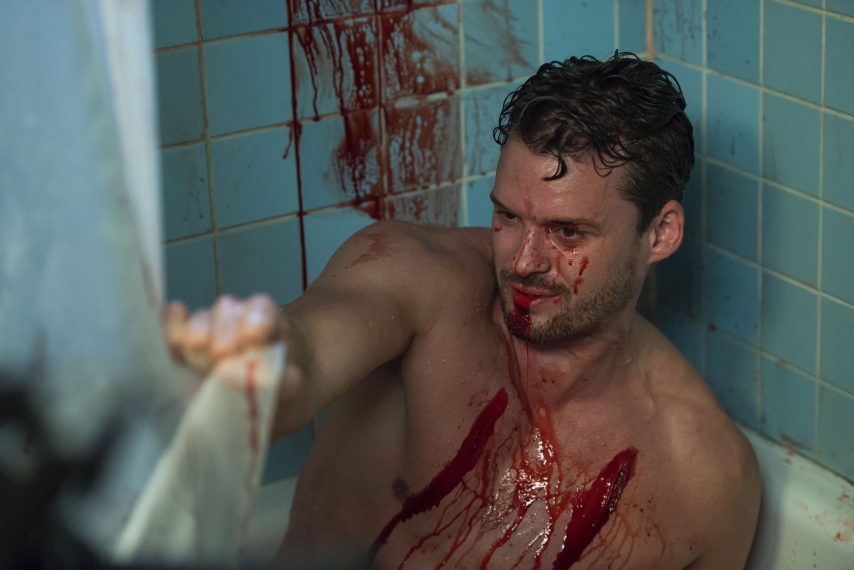 In the five years Bates Motel has been on, we all knew that eventually Norman would have to hit the showers.  However, I don't think anyone expected anyone other than Marion Crane to bite the dust.  I guess none of us counted on the idea that you just can't kill Ri-Ri.

Changing the established story to have our adulterous Sam be the one to meet the grisly fate, I imagine, will be one of those divisive moments for fans of both Psycho and Bates Motel.  The show has already changed quite a bit already: in the film, Sam wasn't married if memory serves correct.  He also didn't interact with Norman until after Marion was murdered.  As a result, I figure a good number of people will see Norman, dressed as himself, killing Sam rather than Marion to be a stroke of genius.

Others, I figure, will be displeased that it was not the object of desire that spurred "Mother" to kill (or even that "Mother" didn't do the killing).  Rather, "Mother" merely manipulated Norman to kill a man who represented his father, a curious version of patricide.  It almost makes it look justifiable, given how Sam cheated on both women.  No one should be killed for committing adultery and being reprehensible, but there you go.

I tend to fall on the latter side of the issue.  Lust, up to now, was a primary motivation for the killings, and to see Sam stabbed was a bit of an anticlimax, particularly again since the title of the episode is Marion.  I'm not sold on the idea that switching victims (and letting Marion live) was brilliant.  It also makes me wonder whether Sam was that unable to defend himself.  I figure Sam was physically stronger than Norman.  Yes, Norman did take him by surprise and he had a butcher knife coming at him, but unlike Marion he didn't have to worry about trying to both protect himself and cover his nakedness.

Part of me still thinks Sam could have defended himself and not gotten himself killed.

Perhaps good, perhaps bad was in how Marion teased the audience with the infamous shower scene when Ri-Ri hit the showers, if memory serves right in the middle of the episode.  People were waiting for The Big Moment...only to not have it come.

Perhaps if Marion had been killed in the way everyone expected, we would have been essentially watching a remake of the rest of Psycho (though it seems unlikely Madeleine or even Sam would have hired a detective to find Marion, and we had Dylan waiting in the wings).

Complicating things in the 'we've gone original' is that Marion didn't completely go original.  As Sam is dying, he copies the movements Marion did in Psycho (in shock, moving her hand to grab at the shower curtain, pulling them down as he/she collapses out of the shower, the look of disbelief etched on his/her face).  You can't say they opted to break with tradition while simultaneously adhering to it. The victim may have changed, but the imagery remained the same.

Let's move on to the performances.  Highmore again really excels as Norman Bates, particularly when he struggles with his sanity as he insists Mother isn't real until 'Norma' so overwhelms him that he surrenders.  He even has a moment of comedy when discussing with 'Mother' about being functional despite his insanity.

"The world is full of mad people who function, many of whom are Heads of State," he tells her.  Was that a sly dig at President Trump?  Who is to say?

His scenes with Rihanna were also well-acted, particularly given how he, the trained actor from childhood, could have overwhelmed the relative newcomer.  However, both did real well when they talk quietly.

Ri-Ri is not a great actress (or even an actress given her few credits and primary career as a pop singer), and it shows in her last scene with Highmore when she expresses her disappointment in herself by getting involved with Sam.  However, credit should be given where credit is due, and Rihanna handled herself quite well.  It wasn't a great performance, but a good one, showing that perhaps with more training she might make a legitimate second career on screen to compliment her already successful one with a microphone.

Nichols too did well as the overwhelmed Sam, making him almost sympathetic.  Almost.

Curiously, it is the trained Thieriot whom I wasn't convinced with.  His scene where he discovers Norma's dead was not the greatest performance (I felt it a little blank), but he bounced back when he calls to confront Norman.  There was a rage there that pushed him forward.  I've always gone back and forth on both Thieriot and Dylan, and Marion was no exception.

Finally, back to The Change.  Ultimately, I wasn't convinced it was good.  It wasn't terrible and I'm not enraged that established lore was changed.  I just wasn't overwhelmed about its 'brilliance' either.  It was a bit more graphic than Psycho (we did see the knife plunge into Sam's back) but part of me didn't have that 'shock' that I did when I saw Marion in the shower.  I also don't know if having Roy Orbison's Crying during the scene helped or not (again, I lean on the 'not' side).

I've read the reasons for the change, and I can understand them, even up to a point agree with them.  If we had Marion killed, we might have essentially seen the final Bates Motel episodes lose steam by remaking Psycho.  Still, I'm not fully on board with this alteration.  Could Marion have been killed and still have had major changes?  We already have with Norman killing Sam sans drag.

I can see why things were done, but I'm still not there yet. Next Episode: Inseparable
Posted by Rick at 7:13 AM