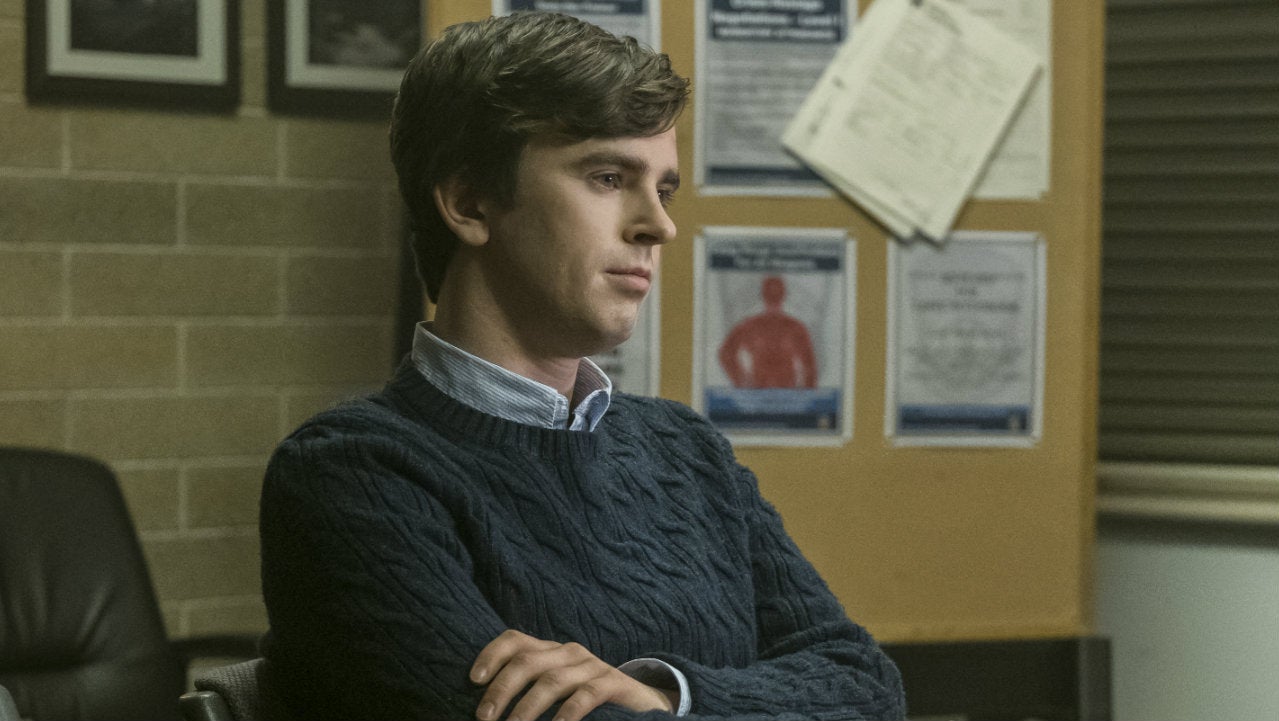 We are now coming to the end of our saga of Norman Bates, with Visiting Hours giving us our closing look at a saga that knows when to end.  Visiting Hours gives us a great moral crisis for one of its characters, resignation from another, and righteous fury from yet another.

Norman Bates (Freddie Highmore) has been formally charged with three murders, but there is a chance that he could get away with it.  His lawyer suggests he plead not guilty by reason of insanity, but "Mother" (Vera Farmiga) pushes hard against it.  There certainly is a good case for it, as the police marvel at how Mother's room is almost museum-like (or perhaps mausoleum-like) in preserving a semblance of life.  Norman is essentially trapped in an unreal world.

Dylan Massett (Max Thieriot), Norman's half-brother/uncle who is perhaps the sanest member, is caught in a terrible bind.  He loves his tormented brother, but he also loves his wife, Emma (Olivia Cooke), whose mother was one of Norman's victims.  Emma understandably is angry about all this, despite being distant from her mother versus Norman's postmortem connection to his.

Emma sees to her mother's cremation, then sees Norman.  She sees a very polite but distant and creepy figure, and at one point Emma 'talks' to Norma.  Emma sees just how far gone Norman is, and leaves in great pain.

Lurking in the background is our dear Sheriff Alex Romero (Nestor Carbonell), still plotting revenge on Norman.  He finally discovers what has happened to Norman, but despite being arrested he won't let go of his mad plan for vengeance.  It appears to have given him more fuel, as he storms the jail, takes Norman hostage, and kidnaps them.  Romero, full of rage, stops short of strangling Norman right then and there, instead ordering Norman to take him to Norma's body.

Visiting Hours is a showcase for Thieriot, who has mastered the art of looking forever forlorn and sad.  His Dylan has that great crisis of conscience between loyalty to his brother and his love for his wife.  A lot of Visiting Hours was almost a domestic drama between Dylan and Emma, with the latter perhaps harder on the former than necessary.

As has been the case almost since the beginning, Bates Motel hasn't used Cooke as much as her talents would have warranted, and Thieriot has never been the most versatile actor on the show. However, he in this episode gives a very strong performance.  In fact, both did extremely well, especially Cooke, who communicated so much even when saying little, for example, when her mother is burned to ashes; the conflicting emotions of the whole situation play out in her face.

However, as has been the case this season, Visiting Hours is Freddie Highmore's show.  He is frightening when speaking to Emma: in turns calm yet creepy, intense and frightening, Highmore in a sane universe would almost be a shoe-in for at least an Emmy nomination.  However, he's on Bates Motel, not the perennially-nominated Game of Thrones, so he pretty much is out.  Much the pity, as Highmore's Norman Bates is the only one to challenge Anthony Perkins' iconic take on the character.

Then there's Carbonell's Romero.  I don't dislike him or his performance, but given how we're one episode away from the series finale, I really don't care for his revenge bit.  It might also be that overall, with the show winding down (as it should), things seem to be done just to wrap them up.  You have to have a character's arc end somehow.

Visiting Hours isn't my favorite, but it does its job.  With strong performances by Thieriot, Cooke, and especially Highmore, it is a well-acted story.  It's one I can't build great enthusiasm for, but it still works well.

Next Episode: The Cord