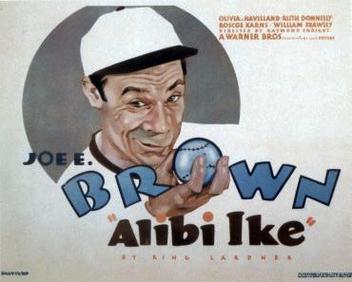 ALIBI IKE
Last year, the COVID-19 pandemic/panic robbed us of a Minor League Baseball season. Despite this and a delayed and abbreviated Major League Baseball season, we kept to the annual Opening Day Film Review. Now with the pandemic/panic on its own deathbed, it's time to look back to the early days of baseball in film with this year's Opening Day Film: Alibi Ike.
Francis X. Farrell (Joe E. Brown) is a baseball phenom, a two-way player who is primarily a pitcher but can also hit homeruns with the greatest of ease. Francis' talent is not in question. It's his inability to be truthful on matters large or small that drives everyone insane. His inability to be straight with anyone earns him the nickname "Alibi Ike" as he is always coming up with an alibi to either evade the question or offer as an oddball explanation.
It's to the point where Farrell, perhaps naively, accepts his name as "Ike". There is only one person who believes him and won't call him either "Alibi Ike" or "Ike". It's pretty Dolly (Olivia de Havilland), sister-in-law to the Chicago Cubs manager Cap (William Frawley). She's fallen head over heels for "Francis" and believes behind his penchant for wacky excuses is a good, honest man.
Farrell is not mean and his habitual lies are never malevolent, but in a case of the boy who cried wolf he now finds himself in a jam. Mobsters have put the squeeze on Farrell to throw the World Series, which he balks at. However, when he makes up a wild excuse to make it appear he isn't in love with Dolly, she overhears him and dumps him on the spot. Depressed, he costs the Cubs the first game, which makes the mobsters think he's on the take.
Farrell isn't though, but his reputation precedes him. Only Cap's wife Bess (Ruth Donnelly) knows what's going on. Now working to trap the mobsters, he finds that they're on to him, leading to wild abductions, wacky escapes and a mad rush to get to the game before the Cubs lose the World Series. 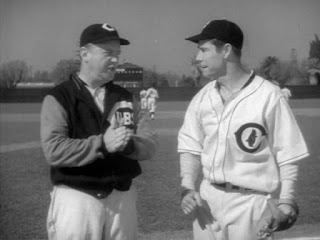 Alibi Ike is a nice, sweet comedy where it's clear we shouldn't be taking any of this seriously. At the time, no one save diehard Cubs fans ever expected them to get to the World Series. That alone I imagine might make Alibi Ike funny to begin with, though it took another 81 years for the Cubs to break the Curse, but I digress.
It's already a wild stretch when you see the classy de Havilland make googly-eyes at Joe E. Brown, but that's part of the fun of the film. Brown's Francis/Ike is not a bad man, but instead almost innocent. He's probably aware of the chaos he unleashes but there isn't an arrogant manner to him. Instead, Francis has a cockiness mixed with a strange habit of making up more and more outlandish excuse for anything.
He tells Cap for example the reason why he was late for Spring Training after literally crashing his car onto the field. If Francis is to be believed, he didn't get there because his calendar was wrong! After failing to strike out a player, an enraged Cap storms onto the mount demanding an explanation. He easily could have struck him out, Ike tells him, but Cap had squeezed his hand so hard that Cap had accidentally injured Ike!
These kinds of whacked-out fibs may be mere covers for Francis, but Brown makes it plausible to think Ike can get away with such nuttiness.
Frawley is a standout as the very patient but exasperated Cap. He is a master of handling quips, his irascible manner lending to the comedy. However, in a couple of scenes Frawley is more than capable of playing straight drama, such as his recognition of Ike's love depression and quiet encouragement. 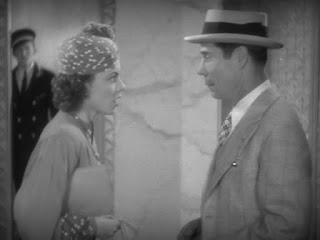 De Havilland, technically making her film debut in Alibi Ike (the more posh production of A Midsummer Night's Dream released after this film which also costarred Brown) seems slightly out of place. The ever classy de Havilland seems a bit lost amid all the hijinks of Alibi Ike and seems slightly forced whenever having to declare mad love for Francis. Early on, she makes clear that she's not buying any of this. However, she does show some believability in her anger when breaking up with him, so we can put her acting to being early in her career when she was still getting the hang of screen acting.
Alibi Ike also has some great sight gags, such as when Francis' jalopy starts up after getting hit by his own baseball hit. His daring escape where he ends up chasing a non-moving car is also hilarious.
Alibi Ike is a nice pleasant little film with Joe E. Brown in fine form as the sweet but maddening Francis. However, it doesn't answer the question, "If the Cubs are the home team, why are they playing at night?"
DECISION: B-
2017 Opening Day Film: Eight Men Out
2018 Opening Day Film: Fear Strikes Out
2019 Opening Day Film: Ladies' Day
2020 Opening Day Film: Mr. 3000
Posted by Rick at 12:59 AM