ABBA: The Movie. A Review 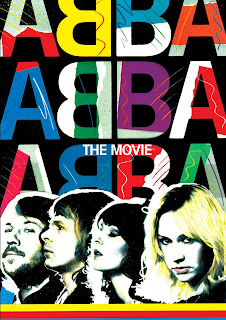 Few musical acts can rightly be called "supergroups", but Swedish pop group ABBA certainly can take up that name. At their height, ABBA was the musical group, charting hit after hit. It is no surprise that a feature film was built around them. ABBA: The Movie is a mix of concert film and fictional narrative. It may not be original, but few will complain when enjoying the ABBA catalog.

Australian country music DJ Ashley (Robert Hughes) is given a hurried assignment: interview ABBA and broadcast the interview as an informal closing to their 1977 Australian tour. Contrary to what the music station manager (Bruce Barry) thinks, interviewing ABBA won't be easy. Worse is that the manager doesn't just want a mere interview, he wants ABBA to reveal their collective souls.

Poor Ashley, who has no knowledge of who these Swedes are, is forced to travel Australia in search of the elusive interview, a task made harder by his press pass constantly failing to arrive at whatever town they are at. He does get interviews with various ABBA fans, and a few ABBA haters, as he struggles to land them for a chat. Just as when all hope is lost, a fortuitous elevator ride allows Ashley a chance to take flight like an Eagle before our pop foursome return to Scandinavia. 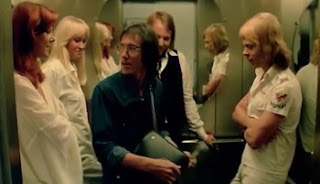 ABBA: The Movie is really just an excuse to glory in ABBA: The Group. It's rather oddball to imagine a novice like Ashley thrown into scoring a personal one-to-four interview with the biggest pop group in the world with nary a minute's notice. In fact, the interest in Ashley's story is so small that once we get the miracle of ABBA TALKS! the film as a whole loses steam. As such, him racing to make the deadline, frantically cutting the interview and sound clips in the racing taxi is rather boring.

However, even what passes as plot in ABBA: The Movie had to have a conclusion.

Instead, ABBA: The Movie is a blending of promotion and presentation. For the most part, we learn that Australians find ABBA appealing mostly because they are "nice and clean", a more wholesome group and sound to the blood-and-thunder music of say a Led Zeppelin.

In some ways, ABBA: The Movie is remarkably insightful about itself. There is more than irony in director Lasse Hallstrom's use of them performing Money, Money, Money as we are shown the myriad of ABBA merchandise. Not that the group cares, for ABBA member Benny Andersson in the opening press conference says its only fair to pay high taxes if you're Swedish. 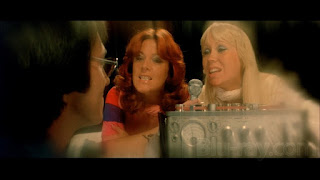 We do learn a bit into ABBA's insight thanks to Anni-Frid Lyngstad's comments at the press conference that "It's boring to travel but it's fantastic to be on stage". As such, ABBA: The Movie does give us something of a glimpse into the band's hectic road life. Where else can one see Benny playing a traditional Swedish folk song on the accordion?

That is, when the film does not have strange dream sequences where the band and the reporter share a picnic.

As Hughes is tasked to carry the bulk of the acting, mostly comedic, we don't see ABBA "act" apart from a scene in a hotel room where Benny asks for the definition of "kinky" and Agnetha Faltskog puzzled over the adulation of her posterior.

The highlights of ABBA: The Movie are clearly the performances captured for the film. It's a treasure trove of musical moments where The Name of the Game and Eagle are showcased to great use. These numbers almost seem like precursors to music videos. The film also has cute moments, like a ballet class singing Ring Ring in their own manner.

ABBA: The Movie is good entertainment even to non-ABBA fans, though the story is again an excuse to showcase the ABBA catalog. However, who can really complain when said catalog is just so good? To use an ABBA song, Thank You for The Music.