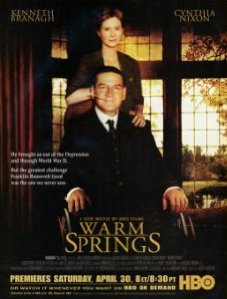 It is said that one has to walk before one can run. President Franklin Delano Roosevelt took perhaps a too literal view of this expression after his polio diagnosis robbed him of the ability to walk. Warm Springs is a respectful, respectable portrait of how his convalescence freed him and his wife from their own restrains to shape them into the dynamic figures they needed to become.

Dilettante Franklin Roosevelt (Kenneth Branagh) aspires to high office, an aspiration nearly derailed by his extramarital affair with his wife's social secretary. While Franklin's wife Eleanor (Cynthia Nixon) can accept a divorce, Franklin's powerful mother Sara (Jane Alexander) makes clear no divorce is possible. Franklin's political handyman Louis Howe (David Paymer) also sees the scandal of divorce as the end of FDR's political career, something he knows would be disastrous for the world.

The strains on the marriage due to Franklin's infidelity go out the window when Franklin is struck with infantile paralysis, better known as polio. Franklin slips into his own great depression, sensing his life is over. Desperate to regain the ability to walk, he hears about a resort in Warm Springs, Georgia that is supposed to have restorative waters. Here, he starts gaining hope that he may walk again while seeing the suffering of others, including the proprietor, Tom Loyless (Tim Blake Nelson).

As Franklin becomes more sympathetic to the plight of others, Eleanor comes into her own as a speaker in an effort to keep Franklin's name alive in Democratic Party circles. A rapprochement is achieved between Mr. and Mrs. Roosevelt, and while Franklin never walks on his own power, his illness brings him closer to the suffering others both disabled and not endure, ultimately preparing him to face two of the greatest challenges of the Twentieth Century. 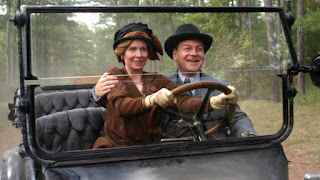 Warm Springs is a respectful, respectable film on the turning point of the future President's life. It does slip into being a bit of hagiography when we see how worshipful the other Warm Springs guests see their "Doc". All these people come to not just see whether the warm waters in Warm Springs but to shake FDR's hand. He inspires them, changes their lives, and such moments do seem to be gilding the lily.

We also get a smorgasbord of characters that rarely get any major play. There's the "ethnic" Italian from the Bronx Jake Perini (Andrew Davoli) to provide a "working class" voice, and a romance between a former ballet dancer and a Warm Springs attendant. They just kind of flow in and out as needed, making them slightly superfluous. The same goes for the almost blink-and-you-miss-it liaison entre Franklin and Lucy Mercer (Melissa Ponzio).

However, Margaret Nagle's screenplay does have major positives. There's an acknowledgement over why Roosevelt opted to keep the degree of his disability secret or at least downplayed. While this seems more like a present-day discussion than one that would have taken place in 1928, at least it gives a voice over the difficulties a disabled politician would face at the time.

Warm Springs also has strong performances from our leads. Branagh's best performance comes not when he's playing the brash, grinning Happy Warrior but when expressing fear and anger over his disability. Near the end, he tearfully admits that he wanted to walk not just for himself but for Eleanor, and one senses that it's his way of asking forgiveness for his indiscretion.

Nixon did not bother to capture Eleanor's distinct high-pitched voice but I think it allows for a performance rather than an impersonation. She shows Eleanor's growing strength of confidence and conviction while still struggling with their married life. It was a casting coup to have Alexander play the domineering Sara Roosevelt as she had previously played Eleanor in the miniseries Eleanor & Franklin and its sequel Eleanor & Franklin: The White House Years. While a much smaller role, Alexander made her presence known.

Also in a smaller but no less important role is Kathy Bates as Miss Mahoney, a physical therapist who also becomes something of an emotional therapist to FDR. She holds your attention when she refuses to wallow with FDR in his misery, reminding him she

Warm Springs does not delve into the personal sides of Eleanor and Franklin as one might expect. On the whole though, it is a well-acted and at times moving portrait of a man embracing his disability to rise to greatness.