The High Note: A Review 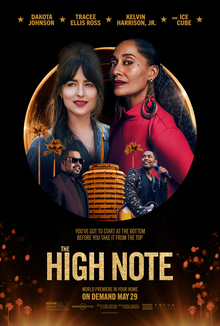 THE HIGH NOTE
The COVID-19 pandemic not only cancelled musician tours but movies about musician tours. The High Note was one of the first victims of movie closures, seeing its debut disappear into video on demand. Longer than it should be thanks to a wild out-of-left field twist, The High Note is pleasant enough for a quiet evening's mild entertainment.
Maggie Sherwoode (Dakota Johnson) has been toiling away as the personal assistant to music diva Grace Davis (Tracie Ellis Ross) for three years. Maggie, however, has a greater ambition: to be a producer, going so far as to secretly produce a track on Davis' live album. While she's on generally good terms with Grace, Maggie still won't push her to ask for a chance.
Grace has her own issues. Her long-term manager Jack (Ice Cube) is very protective of Davis' revenue, preferring she keep singing her old hits versus the risk of making a new album. His overprotective nature is so great he pushes for a Vegas residency, even though Grace enjoys touring and does not want to rest on her laurels.
To get actual experience, Maggie soon finds talented but hesitant singer/songwriter David Cliff, Jr. (Kelvin Harrison, Jr.). To even Maggie's surprise, she's a good producer, but inevitably complications arise from both her side and main gig. These cause a rupture to Maggie's relationship to both Grace and David, along with secrets being discovered. Ultimately though, the music is the thing as all's well that ends well. 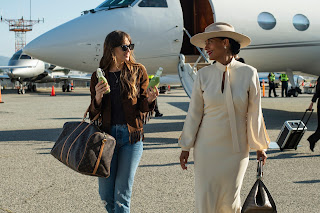 Flora Greeson's screenplay has two issues. First, it's rather cliché. The hesitant, put-upon assistant to a superstar is nothing new, and The High Note opted not to do anything original with the premise. It showed hints of going down new roads when we see quiet moments where Grace and Maggie share confidences, but for the most part Maggie seems simultaneously in awe and terrified of our diva. After three years of loyal service one would think Maggie would  have lost her hesitancy when alongside Grace. However, Johnson plays her as if she is barely three months into her employment.
The High Note also has not one but two "wacky" friends to Grace and Maggie: Gail (June Diane Raphael) and Katie (Zoe Chao) respectively. While Chao coasted through the "wacky" BFF role, Raphael's character totally perplexed me. There was no rhyme or reason for her to be there. She added nothing to the plot and many times her presence seemed so illogical. One wonders what she is doing there at all, let alone with such proximity to Grace.
Here's where the second problem comes in: a lot of it feels disjointed, as if cobbled together from various drafts and jammed together. How else to explain one wild twist that one never had any suggestion was plausible. The High Note does attempt to suggest how despite being both her PA and a major fan Maggie does not know Grace's surprising secret, but it quickly papers over things with a line about Grace having good lawyers. 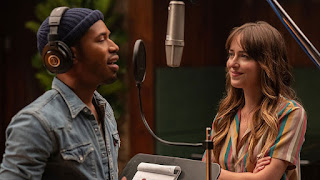 No clue, no real inkling of what happened was ever given, and characters meant to be major seemed to drop out of nowhere. Of particular note is Eddie Izzard as Dan Deakins, a fellow musical star who agrees to drop out as the opening act for Grace's live album launch party so David can make his debut. We never get a hint of who he is until he shows up, then as soon as his plot device goes that's the end of Dan.
I kept thinking how nice it would have been for him to agree to maybe ask David to join him only to be rebuffed when David learns for whom the party is for. Maybe not a great idea but something different.
Johnson is still struggling to leave behind her Anastasia Steele manner from the Fifty Shades films. Here, she's so maddeningly hesitant and timid it's a wonder she's able to speak. Even when confronting producer Richie Williams (Diplo in a cameo) over a remix that she feels is overproduced, Maggie seems unable to be the strong woman she needs to be. Whether trying to talk Grace into putting out new material or romancing David, Johnson comes across as fearful and apprehensive.
Director Nisha Ganatra fails to get many sparks in the David/Maggie romance, their initial flirtations awkward and stiff. Much better were the scenes with Johnson and Ross, who was the standout in The High Note. It makes it to where one would have preferred seeing a Grace Davis-centered film versus her assistant's rather dull life. Cube is just there to rattle off lines, and it's clear that Harrison needs more vehicles to showcase a promising talent.
The highlight of The High Note is the soundtrack, which is filled with good songs. Tracks like Bad Girl and Stop For a Minute were good, and it's unfortunate that the closing song Love Myself failed to garner any recognition.
The High Note is adequate. A bit longer than perhaps it should be, with weak performances save for Ross and Harrison, Jr., it is acceptable but it could have reached much higher.
DECISION: C+
Posted by Rick at 1:56 PM