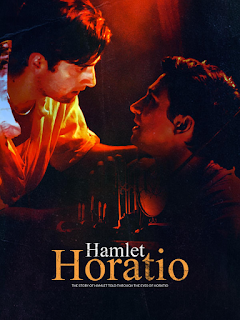 Hamlet/Horatio opts to try something new with its version of Shakespeare's great tragedy. Some elements may scandalize purists, but with exceptional performances from the cast Hamlet/Horatio becomes a mesmerizing visual and artistic work.

While sticking close to the source material, Hamlet/Horatio's concept has it that Horatio (Themo Melikidze) is making a biopic of his dear friend Hamlet (Andrew Burdette). Hamlet is tormented by the death of his father (T.J. Mannix) and quick marriage of his mother Gertrude (Anna Maria Cianlucci) to her brother-in-law Claudius (Michael Elian). Struggling to honor his father's plea for vengeance with his own sense of right and wrong, it not only drives him to despair but his love interest Ophelia (Phage Nolte) to madness.

Horatio stays ever-loyal to the Melancholy Prince of Denmark, but soon things come to a head when Hamlet's actions lead to the deaths of both Ophelia and her father Polonius (Joe Menino). Polonius' son Laertes (Wayne Stephens) now swears revenge, an act that Claudius is only too happy to help with. It is a consuming tragedy, with only Horatio left to tell the tale. 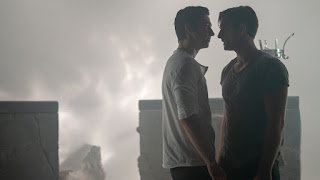 I think Hamlet/Horatio may be a bit too artsy for some due to its concept of Horatio acting as a director, complete with staging. However, once the viewer focuses on the actual story and acting Hamlet/Horatio becomes a rich experience.

At the brilliance of Hamlet/Horatio is the double-act of Burdette and Melikidze as Hamlet and Horatio respectively. Andrew Burdette is starting out his acting career, but already one sees exceptional promise in his performance. His is one of the best Hamlets I have seen on both stage or screen.

He is youthful enough to convince you that he is a conflicted teenager and blessed with extraordinary looks. Beyond the superficial though, Burdette's Hamlet makes the character come alive, as a real person who thinks these tormented thoughts. Unlike far too many versions of Hamlet and Hamlet, Burdette makes Shakespeare's verse sound authentic versus theatrical.

When, for example, he tells Horatio the line "There are more things in Heaven or Earth, Horatio, than are dreamt of in your philosophy", Burdette has it sound almost like he's adlibbing, shaping the thoughts in his mind and speaking them as Hamlet, not as dialogue. Far too often, actors take these lines and force the recitation, attempting to make them sound grand and glorious. 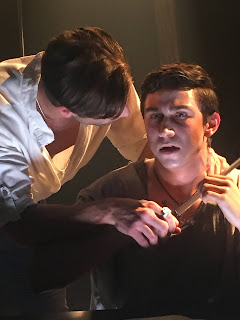 Burdette, aided by director Paul Warner, speaks them naturally, with no embellishment. It's not only a refreshing to see and hear an actor perform Shakespeare with naturalism versus theatricality. It is also a credit to the actor to make Hamlet's torment, doubt and conflict real. Throughout Hamlet/Horatio, Andrew Burdette never rages or devours the scenery. Instead, he brings a humanity to the role, a calmness that makes his tragedy all the more sad. A case in point is the "Get thee to a nunnery" scene. Many actors, even good ones, go all-in on the crazy (real or faked) as they torment Ophelia. Burdette, conversely, is eerily calm, albeit clearly conflicted.

If one is put off by the concept of Hamlet as almost a student film by Horatio, another director would be wise to allow Burdette to play Hamlet in a more straightforward production, where he would be instantly successful if he taps into the same manner.

He is matched beat for beat by Melikidze, whose Horatio is the loyal friend and perhaps something more. Hamlet/Horatio has a bath steam-room scene where Hamlet is clearly hitting on his BFF. Melikidze's performance makes clear he understands Hamlet's none-too-subtle overtures, but he takes no position on the subject. Melikidze does not reciprocate but does not demure, showing less a conflict and more confusion over what Hamlet means to him. 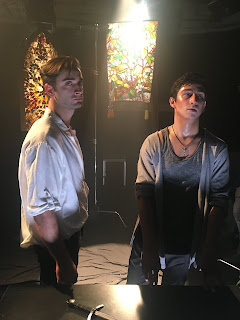 I think more people might be scandalized that Horatio makes the "To Be or Not to Be" soliloquy a duet, with him reciting some of the lines alongside Hamlet in what is a dream sequence. I do not remember ever seeing a Hamlet where Horatio joins Hamlet in his doubts, but Hamlet/Horatio makes it work. It's a credit to screenwriter David Vando (who also has a small role as the Cinematographer on Horatio's film) that it does work without being showy or ridiculous.

As a side note, the real cinematographer, Hernan Toro, does exceptional work again with a limited budget. While some sequences are more stage-bound, other sequences such as the graveyard scene and Hamlet's dream sequence are atmospheric and visually splendid.

This element of Hamlet and Horatio being more than friends may be new, but hardly scandalous compared to what I took to be the suggestion of incest between Ophelia and Laertes. Intentional or not, I saw Laertes as being both too fond of his sister and him slightly jealous over Hamlet's attention to her.

The rest of the cast is on the whole equal to the task. Cianciulli's Gertrude is an innocent, loving towards her son and husband yet terrified of both. Elian's Claudius has moments of strong villainy but also a humorous moment when the monarch is clearly bored by the play-within-the-play.

Some scenes may be a bit too artsy, such as when The Ghost appears and reappears digitally, or when Hamlet is caked in whiteface, lost in his thoughts. Other moments, such as when the Player King and his Troupe perform, is exaggerated and distracting. There's also the film's curious decision to punctuate Polonius' idiocy with sound effects, which I thought were unnecessary.

Hamlet/Horatio still has a few kinks to work out in terms of music, and the concept of Horatio being a film director that is making a quasi-Hamlet biopic may be a bit off-putting. However, Hamlet/Horatio has more positives than negatives, Andrew Burdette's performance at the very top of them, one of the best I've seen this year. Exceptional performances elevate Hamlet/Horatio from artsy film to strong albeit abridged Shakespearean adaptation.