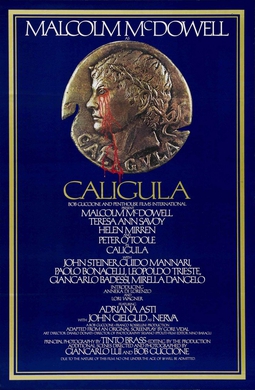 After the death of his great-uncle Tiberius (O'Toole), young Caligula (McDowell) becomes Emperor of the Roman Empire. It isn't long before he becomes more and more decadent, debauched and deranged. He quickly eliminates Macro (Guido Mannari), who killed Tiberius to allow Caligula to accede the Imperial Throne.

Despite maintaining an intense incestuous relationship with his sister Drusilla (Teresa Ann Savoy), Caligula takes as his wife Caesonia (Mirren), an Isis priestess and according to Drusilla "the most promiscuous woman in Rome". Caligula's blood and sex-lust knows no bounds, made worse when Drusilla dies. Now totally insane, Caligula scandalizes even blasé Rome when he turns the palace into a brothel with Senators' wives as its prostitutes. It is clear that Caligula must not just be dethroned but executed, and that his idiot uncle Claudius (Giancarlo Badessi) would make for a better ruler.

There are graphic depictions of every sexual act imaginable with the possible exception of bestiality (though there is a scene where Caligula is in bed with his horse). Leaving nothing to the imagination, we start with the crazed lasciviousness with a pseudo-romantic romp between a barely-dressed man and a barely-dressed woman cavorting to Aram Khachaturian's theme from his ballet Spartacus. It is horrifying to find this is a love scene between siblings. No matter how hard Caligula tried, it is difficult to make incest a romantic and lush enterprise. 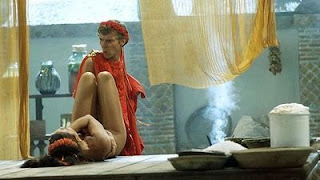 At least they have the excuse of the language barrier, but the main cast has none of that. O'Toole's calls for his "little fishes" is hilarious, and one can only wonder what he too thought as he wandered around with all this graphic obscenity all around him. There's endless nudity from everyone save O'Toole and Gielgud, both of whom mercifully disappear forty-five minutes into the film. They are spared more humiliation, and one blesses Gielgud for keeping a straight face among the cacophony of naked men and women swimming around a diseased-looking O'Toole.

Both of them at least acted and gave it the best effort to play all this seriously, but this has to be a low point for both. O'Toole's Tiberius, claiming to be a moralist among the parade of penises, masturbations and freaks around him, hopefully made him rethink the wisdom of being in Caligula. It must have been flat-out impossible for them not to see how Caligula's sets and grotesque figures took viewers' eyes off their acting.

It's unfortunate, because there were hints of when McDowell could have made a good Caligula if not for his "Little Boots" dance and occasional fits of hamminess. Savoy's best performance was when playing a corpse, and one sometimes wonders if she herself was dubbed. Only Mirren spares herself total humiliation, but her gaudy costumes do not help. 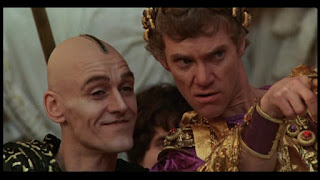 Caligula's cavernous sets overwhelm everything, and while they are massive they also make clear this is a massive film set. The costumes too were too clean to be real, at least for those who wore costumes. It is one thing to portray Caligula's court as being debauched, unrestrained and illogical, one where naked women are literally washed with the newly-ejaculated sperm of well-endowed men. It is another where the Roman peasants wear phallus-shaped foam hats on the streets.

There is no wit save for perhaps one line spoken as Caligula hosts his Imperial Brothel. The soldier  Chaerea (Paolo Bonacelli) in a dubbed voice says "Give him enough rope, perhaps..." and Caligula's alien-looking courtier Longinus (John Steiner) finishes "He'll hang us all!"

Caligula is so wildly disjointed in terms of plot, but that almost serves as a positive to distract from the endless fixation on clitorises and penises in all shapes and forms, from the physical to the cakes of cocks parading all about. What must have the extras carrying naked women to have their vaginas drenched in lemon juice been thinking when given this task?

Truth be told, what must anyone have thought during the production of not "one of the most important films of this or any generation" but one of the worst films in human history? Caligula is so bad, so flat-out dirty, so seedy, I'd rather watch the positively restrained and sophisticated  The Hangover Part II instead.