The term "gaslighting" (to try and manipulate someone into believing something that isn't true) is a dominant one today, yet few remember the origins of the term come from a Golden Era film. Gaslight is a well-acted albeit long film about the manipulation and ultimate revenge of the manipulated.

After her aunt is brutally murdered, Paula Alquist (Ingrid Bergman) goes to train as an opera diva like Aunt Alice. However, while her career doesn't take she herself is, by suave pianist Gregory Anton (Charles Boyer). A whirlwind romance and marriage brings them back to the murder house, which Paula had inherited.

Soon, Paula appears to be slipping into insanity. Items begin disappearing with Paula unaware that "she" had taken them. There are footsteps only she can hear, and gaslights dimming with no apparent reason that only she can see. There's evil at work, but what or who can be behind it? Into this case comes Brian Cameron (Joseph Cotten), a detective and fan of Paula's aunt who suspects Gregory is not whom he says he is. As Paula's mind starts disintegrating, it will take all her strength to find out if and who is gaslighting her.

Gaslight is held up by the strong central performance of Ingrid Bergman. She easily transitions from the young woman in love to that of the terrified figure, shivering at the idea that she might be going mad.

The brilliance of Bergman's performance is that the growing fear and anxiety is played without her becoming fully hysterical. Instead, the struggle between what she knows and what she is being manipulated into believing is played as a woman torn in two. You never see her really going bonkers. In fact, there's a certain restraint in her manner, one where Paula's growing fears fights against her knowledge of her genuine sanity.

It's only at the end, when she gets her revenge, that we see Bergman unleashed, and again it isn't a theatrical performance. Instead, it's the performance of a character who now has full command, enacting her own justice on her tormentor.

Boyer at times seemed a bit theatrical, his French accent making things more so. Of particular note is when he reacts when Paula finds a note from "Sergius Bauer", a gentleman caller of Aunt Alice. It seems clear he is villainous, and I wonder if director George Cukor opted not to make the mystery less obvious. Then again, the adaptation of Gas Light probably wanted us aware that Anton was manipulating her for his wicked intentions. 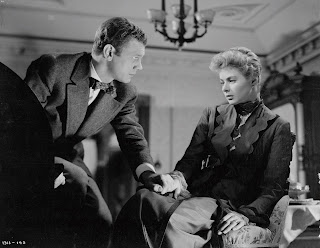 Angela Lansbury earned an Oscar nomination for this, her screen debut, and it is well-warranted. As the tawdry new maid Nancy, Lansbury's performance made one wonder whether she too was in on the act. That balance between sleazy and innocent is well-handled by Lansbury. Dame May Whitty was the comic relief as the nosy neighbor, but while she was kept to a minimum at least it didn't come across as silly.

My issue would be with Cotten, who seems slightly miscast as the investigator. I didn't think it a horrible performance but it seemed a bit stiff, like he was in the theater rather than a film. There was a slight artificiality to it that didn't quite convince me he wasn't "acting".

One excellent element in Gaslight is Bronislau Kaper's score, which gave Gaslight the extra element of Gothic horror. Joseph Ruttenberg's cinematography and the use of shadows also gave the film a sense of the macabre.

As well-acted as Gaslight is, the beginning did seem very "acted", and the film seemed very long. While minor details they did drag the film down a bit.

Despite this, the impact Gaslight continues to have has not abated. The ability to manipulate people into believing something false is true is a common one. Gaslight may not be as well-known by those more familiar with the term than the film. However, the film is worth watching in particular for Ingrid Bergman's exceptional performance.