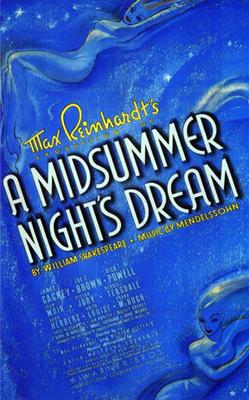 Just before the marriage of Theseus, Duke of Athens (Ian Hunter) to Amazonian Queen Hyppolita (Verre Teasdale), we find ourselves in a love quadrangle. Young Hermia (Olivia de Havilland) is in love with Lysander (Dick Powell), and he with her. However, young Demetrius (Ross Alexander) is also in love with Hermia. She does not return his affection one whit, but her father favors Demetrius over Lysander. Helena (Jane Muir) is passionately in love with Demetrius, but while he's toyed with her, he is not interested. 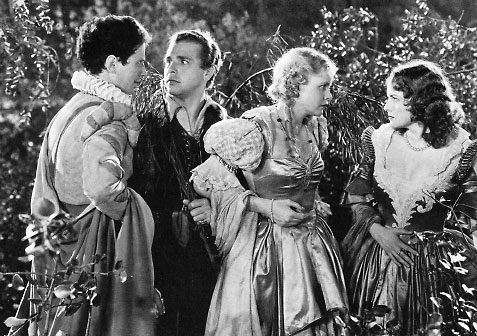 Lysander persuades Hermia to run away with him, otherwise she will either be forced to marry Demetrius, be forever unwed or maybe even killed. Both Demetrius and Helena pursue them into the forest.  Into the forest also is a group of 'actors', really lower-class workmen, who are working to perform a romantic comedy/tragedy, Pyramus and Thisbe, in order to gain royal pensions for the wedding revels.

The leads are played by Bottom the Weaver (James Cagney) and Flute the Bellows-Mender (Joe E. Brown). Bottom is a total ham, desiring to play every part. Flute just wants to eat his seeds.

Our two groups are unaware of the fairies that dominate the woods. Soon Oberon, King of the Fairies (Victor Jory) and his Queen Titania (Anita Louise) begin quarreling over a changeling child. Through trickery and magic, Oberon casts a spell on Titania to fall in love with Bottom, who has been given the head of an ass.

Oberon's efforts to help our mortal lovers goes a bit haywire thanks to the puckish Puck (Mickey Rooney), who accidentally uses magic on the wrong males, causing both Demetrius and Lysander to fall in love with a shocked and flummoxed Helena, leaving poor Hermia fending for herself.

Over the course of this long night, Oberon gets the changeling from Titania but, feeling some guilt, reverses the spell and restores Bottom. Eventually Puck sorts out the romantic tangles with Lysander & Hermia and Demetrius & Helena falling in love (or in love again). They now join the royal wedding, where our comical players entertain the Court thanks to their ineptness.

With all loves restored and all mended, Puck bids us farewell. 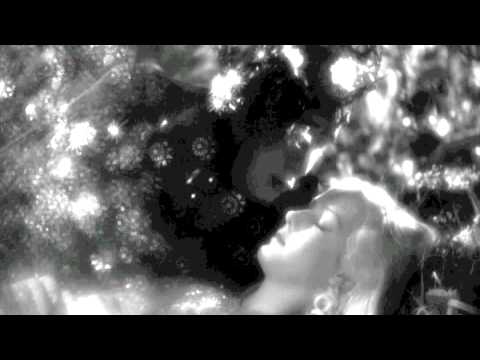 If anything, A Midsummer Night's Dream is very lavish and artistic. I figure this was a way for Warners to add 'a touch of class' to their reputation. I think it is one of the most elaborate adaptations bordering on beautiful.

Part of me feels it's a pity it was not in color, but the overall look of the film is still highly impressive. Hal Mohr's cinematography captures the ethereal world of A Midsummer Night's Dream, particularly when we see the Fairy Court. The shimmering lights when we see the fairies, particularly with Oberon and/or Titania, makes the film literally sparkle.

Interestingly, Mohr was not nominated for an Oscar but ended up winning anyway for his cinematography. He was the first, and I believe only, write-in Oscar winner, which makes one wonder both why he wasn't officially nominated and why the Academy dropped the write-in votes.

The film is very poetic and artistic thanks to co-directors Max Reinhart (who had done the original Hollywood Bowl production it was based on) and William Dieterle, who had more film experience. Of particular note are the various ballet numbers from the fairies, which today may look a bit curious and over-the-top. However, whenever Oberon and Titania literally take flight, you are impressed at how well that works.

The special effects are also quite impressive and have stood the test of time.  The performances, not so much. 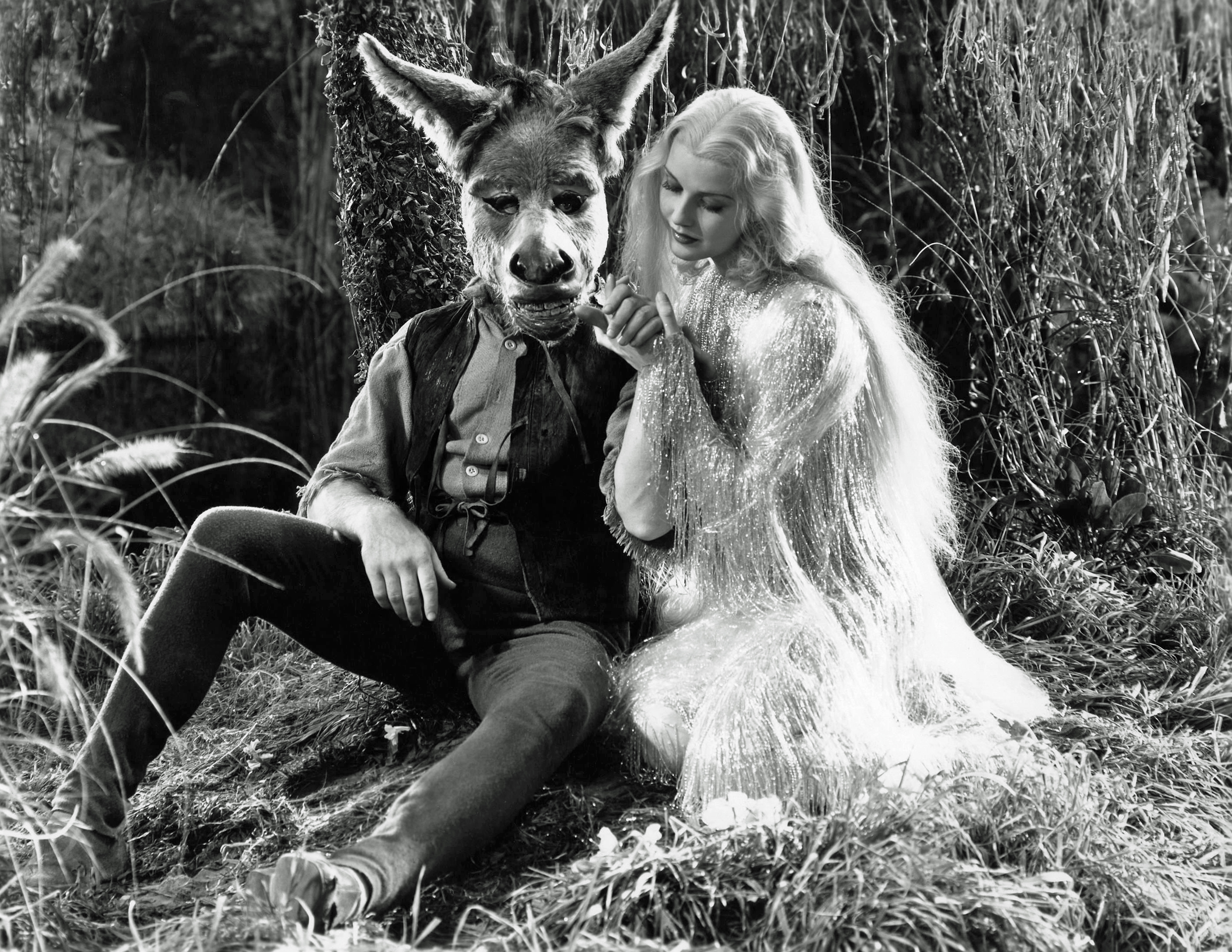 A Midsummer Night's Dream was the film debut of Olivia de Havilland, who was discovered in the original Hollywood Bowl production and was brought on board to recreate her performance. While you can see that she was a bit more mannered than those who had more film experience, you can instantly see her talent as the lovelorn, spurned, and re-loved Hermia.

Rooney, also recreating his role, is ideal as the rakish Puck, delighting in the misadventures of these foolish mortals. Adopting a quirky tone, Rooney has an exuberance in his Puck, thrilling in the outlandishness of it all.

Similarly, Cagney cut loose and dove into his ham Bottom. This wild, over-the-top performance must have been a surprise to his fans, who were used to seeing him as the gritty gangster. Cagney's talent had been largely untapped, and here we see that he is more than able to do great comedy as this literal ass. Whether it is stumbling through the forest, being wooed by a Fairy Queen or giving a comically bad performance as 'Pyramus', Cagney was certainly in on the joke.

Other performers, however, seemed a bit lost. Anita Louise, while beautiful, was perhaps too dramatic as Titania, though given she was a Fairy Queen, I can cut her some slack. Joe E. Brown seemed so uncomfortable in Shakespeare, as if he just wanted to get it over with. Victor Jory as the Fairy King looked odd and sounded odder.

The worst was Dick Powell. Powell had two phases in his career: the boyish crooner and the hard-nosed gumshoe, who went from charming kid to cynical film noir antihero with surprising ease. A Midsummer Night's Dream was during his boyish crooner phase, but the breezy manner he used to great success in musicals like 42 Street and Gold Diggers of 1933 felt so wildly out-of-place in Shakespeare. Just about everything in his performance was so off.

Still, despite some offbeat casting A Midsummer Night's Dream is quite lavish and entertaining, elevated with Erich Wolfgang Korngold's adaption of Felix Mendelssohn's incidental music. Not without flaws it is still an elegant adaptation.