Ben Is Back: A Review 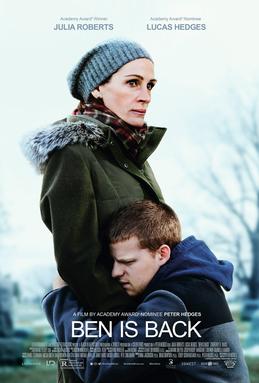 Ben is Back wants to be a searing drama on an important issue. It does not quite hit that level, sometimes slipping into what I like to think of as an unhinged Hallmark Hall of Fame special. It is saved by one performance, a reminder that Julia Roberts still has so much more to offer than a million-watt smile.

It is Christmas Eve, and the Burns Family is getting ready for the holidays. Holly Burns (Roberts) shepherds her three children: teen Ivy (Kathryn Newton) and elementary school Lacey (Mia Fowler) and Liam (Jakari Fraser) through a church pageant (despite being agnostic/atheists). There's food and presents...and then there's Ben (Lucas Hedges).

Ben is back, and while Holly and the two youngest are thrilled, neither Ivy or her stepfather Neal (Courtney B. Vance) are. Neal is especially dubious of Ben given his troubled history of drug addiction.

Ben insists that his sponsor suggested he was ready to visit, but Neal and Ivy do not agree. Holly does not want to see their point of view, but eventually a deal is struck: Holly sticks with Ben at all times and gives him a drug test and he can stay.

The rest of Ben is Back surrounds his dark night of the soul on a most exhausting Christmas Eve. A visit to the mall (begging the question why anyone would go shopping on Christmas Eve, but whatever) triggers him and gives Holly a chance to verbally abuse Ben's old (and senile) doctor for prescribing medication that got him hooked.

An NA meeting where he meets a pretty young girl whom he doesn't recognize until she tells him he was her old dealer.

A Christmas pageant that leaves him in tears, especially after seeing the mother of Maggie, the girl he sold drugs to leading to her overdose.

A dog-napping where Holly and Ben search for whoever stole Ponce from them in retribution for Ben being back.

As we plunge further into this Yuletide nightmare, Holly learns that Ben would turn tricks for his history teacher in exchange for drugs and that Maggie's dad is still enraged with him; we also meet his former friend Spencer (David Zaldivar) now going by 'Spider'. Spider, still an addict, knows that their old deal Clayton (Michael Esper) had something to do with the dog-napping.

Ben tricks Holly into going to Clayton alone, where he's pressed to do one last drug run. Holly keeps frantically searching, evading Neal's constant calls. Eventually, Ben does the job, gets Ponce back and almost overdoses himself, rescued in time by Holly.

As I think on Ben is Back, I wonder if writer/director Peter Hedges (coincidentally or not Lucas' father) was perhaps throwing in way too much (not that the 'shopping on Christmas Eve for clothes when I figure Ben would have some clothing in his house' bit isn't a bit curious already). The film is filled with wild coincidences and chance meetings that would make Charles Dickens blush, albeit perhaps with envy.

The film desperately pushes for 'emotionally devastating' and it does not quite get there. I put it to a variety of factors: the endless coincidences that pop up reminders of Ben's troubled past, the almost cliched manner of the parents and their joint children, the wild 'one last score' story, the predictability of how Holly was going to be tricked.

There is also another element: Lucas Hedges. It was by sheer coincidence that I saw Ben is Back immediately after Boy Erased, so I got a Lucas Hedges double feature. I think I've seen enough of Hedges fils as 'troubled young man', and moreover this was the first time in his short but respectable career where I did not believe Lucas. There was an artifice, a mannered and almost 'actory' take on the role. I could see him acting.

Part of it is with the limitations on the part (troubled young addict). However, part of it is Lucas. There is something wrong when you agree with a character saying "I'm not worth it". Ben is just bringing chaos wherever he goes.

However, the film's saving grace is Julia Roberts. We do get that "Julia Roberts Smile" early in the film, but for the rest of the movie we see her pull out the dramatic work as Holly, blinded by love. Whether it's in her telling off the doctor slipping into dementia for causing the problem or frantically searching for her firstborn or even having to ask for help from Maggie's mom, Roberts excels past this domestic drama riddled with cliches.

She so dominates the film that we pretty much forget everyone else, though to be fair Peter does too, giving the rest of the Burns family little to do.

Ben is Back in terms of story is nothing unique to the issue of drug addiction. It even loses its way a bit when we have to make Ben a mule to get Ponce back. However, the film is worth seeing if only for Julia Roberts, proving yet again that she's more than just a 'Pretty Woman'.