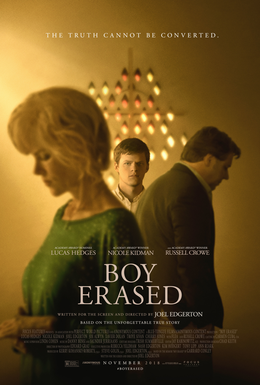 I went into Boy Erased, the film adaptation of Garrard Conley's memoir, with some trepidation. Was this going to be another 'Christian-bashing' film where Christians showed their true colors in their intolerance, bigotry and general phobias? There was some nuance in this story to its credit. However, while Boy Erased has some good performances and an interesting story to tell, it is done in by some bad cinematic choices.

Boy Erased is of  'Jared Eamons' (Lucas Hedges), a young man who is the son of Pastor/car dealership owner Marshall (Russell Crowe) and his wife Nancy (Nicole Kidman). Told in a mix of flashback and present-day settings, Jared is 'outed' after a college classmate, Henry (Joe Alwyn) calls Jared's parents pretending to be a counselor informing them of their son's 'deviant' behavior.

Henry does not mention that he essentially raped Jared, but nonetheless Jared does admit sexual attraction to other men. With that in mind, the devout couple put the squeeze on Jared to leave school and go to a 'gay conversation' program called Love in Action.

Love in Action's teen/young adult program is called Refuge, run by Victor Sykes (director/screenwriter Joel Edgerton). To be blunt, Refuge is a crypto-fascist organization: akin to a prison where these young men and a few women are psychologically and in some cases physically tortured. I figure this is a way to 'get the gay' out of them, but the program (full of spelling errors in their outline, much to Jared's amusement/contempt) is quite horrifying.

Of particular note is Cameron (Britton Sear), a large football player who is at one point beaten by his own parents and sister at Victor's command. Cameron has transgressed somehow (the nature of his transgression, like most of Boy Erased, is rather opaque). Earlier, he is told that God will never love him the way he is.

I pause here to say that such words are totally unbiblical. God loves all no matter who or what we are, though that love should not be confused with having a blank check. Romans 6:15 makes clear that just because we are under Grace does not mean we can sin (however that is defined by individuals/churches). Yet I digress.

Eventually Jared has had enough and has a bit of a breakdown, doing what none of the other Refuge participants have done: force his way out. Nancy comes to her own peace with things. "I love God, I love my son. And that's that", she says. Marshall is a harder nut to crack.

Moving on four years later, Jared is in New York where he is embraced and about to publish his article on his experiences with 'gay conversation therapy'. He goes back to Arkansas one last time, where his father still struggles with things. "I'm gay and I'm your son and neither of those will change," he tells Marshall. Jared drives off, leaving the door open for Marshall to come through if he chooses.

I imagine Boy Erased will be seen by how one sees such things as homosexuality and faith, two things that seem to be irreconcilable. I would argue that they are not; there are groups such as Your Other Brothers and individuals who either do not see a conflict between being a devout follower/believer of Christ and their same-sex attraction. However, I am not one to question how others feel or think on such things nor tell one how he/she should feel/think on such things.

Yet again I digress.

On a purely technical level Boy Erased has some major issues. The chief issue is Eduard Grau's cinematography. Few films have been so visually opaque that it makes things almost impossible to see. Again and again the look is so dark that one can hardly see anything. One such moment is when Jared is raped.

There is no other way around it. Jared may be sexually attracted to Henry, but in this scene he keeps saying no and his muffled screams of terror make it clear he is not willing to have sex in that way with Henry. Here, such darkness might work, but when Jared comes out to his parents the visuals are so dark one can't see things. Since Edgerton does this repeatedly, the rape being so dark was not a directorial choice. It was how the film as a whole was.

Another weak choice was to keep Jared as pretty much more an observer than a participant. As much as this was his story (Garrard Conley's name being changed to Jared Eamons), it isn't until near the end that Jared takes more of a central role. We have all these stories that frankly were more interesting and would have been nice to have seen. Cameron's story in particular was more involving and ultimately tragic (we learn he committed suicide).

There's the inauthentic Gary (YouTube personality Troye Sivan), who has not changed his desires but tells them what they want to hear to survive. There's Jon (Xavier Dolan), who seems devoted to Refuge to the point he'd rather salute than shake hands with a man.

It makes one almost wish Boy Erased had focused on their stories, and especially not hopped back and forth between Jared's time at Love in Action (a most ironic name given how monstrous they were) and prior.

Performance-wise I think well of Hedges, though with this, Ben is Back, Manchester By the Sea and Lady Bird, he is cornering the market on 'troubled young men'. Hope he does a comedy soon (and Lady Bird doesn't count as he too played a 'troubled young man' who at one point cries). Kidman too did well, though her at-times breathy delivery was curious. I will say that her 'big scene' as she storms to rescue Jared is very effective. Crowe was acceptable but nothing revealing.

Boy Erased has some good performances but it is too dark visually, with a lead character that was more observer than central to the goings-on. Moreover, again while this is Garrard Conley's story, this is not how many Christians that I know (even gay Christians married to same-sex partners) think or behave. Perhaps it is because of people like Conley, who have spoken out about their own horrifying (and unbiblical) experiences, that we can have that 'conversation' between two groups that seem openly hostile to each other.

Boy Erased is an interesting story that could have been more.