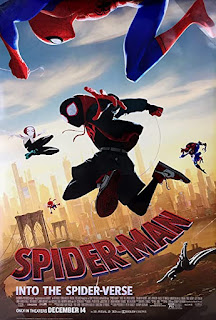 SPIDER-MAN: INTO THE SPIDER-VERSE

I wish my late friend Fidel Gomez, Jr. were here for a variety of reasons. One of them is that he would give his views on Spider-Man: Into the Spider-Verse, as he would probably not go into it willingly. He always complained that Miles Morales should have been fully Hispanic rather than half-Hispanic, feeling that there was no need to NOT have a totally Hispanic hero.

As a digression, he felt the same about how Green Lantern Kyle Rayner later discovered he too was half-Hispanic. Fidel's major complaint was 'why couldn't he have started out as Hispanic to begin with?'

Spider-Man has always been the superhero closest to my heart, and I'm very protective of him. Spider-Man: Into the Spider-Verse does justice to the genre, with a mix of beautiful animation, a surprisingly logical story given its multidimensional nature and characters I found myself caring about.

At this juncture I would like to say that I'm a bit confused as to why Miles apparently uses his mother's surname versus his father's, though perhaps being named 'Miles Davis' might be a bit too much, but I digress.

Miles, rather reluctantly, is sent to an elite New York City school, cutting him off from his Brooklyn roots. He has the smarts, just not the desire. His interest is piqued by a pretty new student, but he does not have the smooth moves yet to try much of anything.

He does love Spider-Man (Chris Pine), and to his total shock he finds that a spider has bitten him too while spending time with Uncle Aaron. Soon, it becomes clear that this was no ordinary spider, but being a kid, Miles has no idea how to handle his new powers. 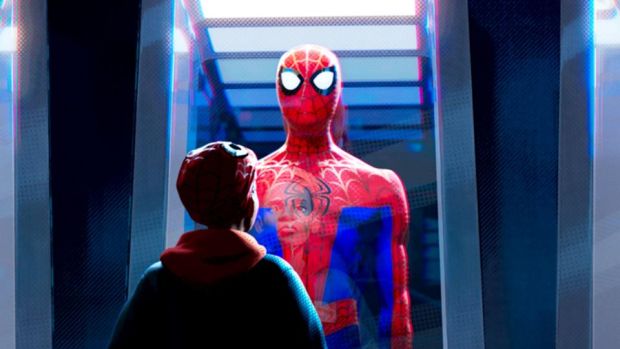 Circumstances not only force Miles to take up the mantle of 'Spider-Man' but also face off against Kingpin (Liev Schreiber).

Kingpin has set into motion the collapse of various multi-verses that end up bringing a variety of Spider-Men into Miles' universe. That included Peter B. Parker (Jake Johnson), a more disheveled version of our Peter Parker, Spider-Woman (Hailee Steinfeld), who has been masquerading as 'Gwen Stacy', the girl that piqued Miles' interest, Peni Parker (Kimiko Glenn), an anime-type figure, Spider-Noir (Nicolas Cage), a Spider-Man from a film noir dimension, and Spider-Ham (John Mulaney), from a cartoon-like world where his name is "Peter Porker".

All these various Spider-people join forces to stop Kingpin from bringing all the various dimensions in one place (Miles' universe) and get back to their own universes. More often than not, they freeze Miles out as he has both the least experience and is just a kid. Only Peter B. Parker thinks he has potential but is constantly overruled.

Eventually though, after some twists and turns and more personal losses for Miles, he steps up to be the hero he needs to be.

We start with an oddball acknowledgement of the various versions that have come already, down to the infamous dance number in Spider-Man 3 when then-Spidey Tobey Maguire went 'emo' and ended up looking foolish. The various winks and nods to the previous Spider-Man mythos liven up the story.

We also see the film awash in beautiful, bright colors. The film also takes a wide variety of animation styles from television cartoons to anime to noir and integrates them beautifully. There are times that the film almost looks like there was live-action.

Each Spider-Man is given his/her own style, and the film keeps to their unique styles. Given that we have a cavalcade of Spideys we can accept the colliding styles and more important to me, the issue involving Miles' Peter Parker did not upset me as much as it did when I was watching.

As a side note, in many ways as we the tongue-in-cheek manner we are (repeatedly) introduced to the multiple Spider-beings, we see they did keep to a pattern of sorts: the loss of someone important, the difficultly they endured, and the desire to return to their own universes.  Miles, sadly, would not be the exception.

The voice work is brilliant. Moore's Miles Morales (keeping to the alliteration of 'Peter Parker') makes Miles the somewhat insecure young man attempting to discover himself with his new powers. Jake Johnson, someone who needs to do more work in film, makes his Peter B. Parker into a regretful man who finds himself the unlikely mentor, balancing humor with heart.

Steinfeld has focused more on her pop music career of late, but her Gwen was wonderful and a badly needed positive role model for young girls. Cage is pretty much unrecognizable as Spider-Noir but it's a nice surprise.

The cast also has a great script to work with, where you don't sense any of the multiple Spideys getting short-changed, though I figure there was some of that. You might have the issue of making Kingpin more sympathetic, but it does give you a reason behind his villainy. You even have wild twists with Doc Ock and Prowler.

You also have a nice send-off for the late Stan Lee, who keeps his cameo in the film. His first line, "I'm going to miss him," could also apply to this much-loved figure.

Spider-Man: Into the Spider-Verse has both a lush look and witty yet heartfelt story that has you care about the characters and their situations. It is a fun film that also hits you emotionally and is a delight from beginning to post-credit end.