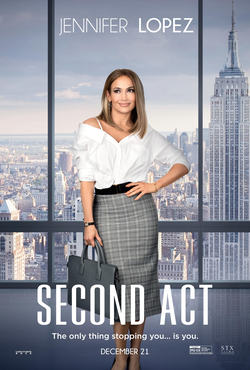 There are few positives about Second Act. J-Lo looks amazing for 49. Vanessa Hudgens is very pretty.

Other than that, I think Second Act is pretty much forgettable, done in by a lousy story that is clueless about what it wants to be or do.

Maya (Jennifer Lopez) has been an assistant at a Costco-like store for seven years and is dismayed to find that she is being passed over for a promotion, again, because she does not have a degree (Maya's highest education level is a GED). At her 40th birthday party thrown by her wacky BFF Joan (Leah Remini), she wishes that 'street smarts were as good as book smarts'.

Enter Dilly (Dalton Harrod), who promptly creates a fake résumé for "Maria de la Vargas", Maya's legal name. He makes her a Harvard graduate and Peace Corps volunteer. Maya is shocked, until her résumé attracts the attention of Anderson Clarke (Treat Williams), head of a major conglomerate. "Maria's" work as a consultant attracts his attention, thinking it's just what his company needs to revitalize their skin-care line.

Maria now has to bluff her way into creating a whole new line using purely organic material. She has to face off against Clarke's adopted daughter Zoe (Hudgens), who takes an instant dislike for Maria.

Did I mention that Maria's reluctance to have children with her longtime boyfriend Trey (Milo Ventigmilia) has to do with the fact she gave up a daughter for adoption when she was 17, something she never mentioned to the child-loving Trey?

You know where this is going, right?

Maria not only has to work to both thwart and bond with Zoe, but also thwart the machinations of Rob (Freddie Stroma), who constantly attempts to show Maria is a fraud. Maria's only allies are her wacky personal assistant Ariana (Charlyne Yi) and wacky scientist Chase (Alan Aisenberg), who do their best to help her navigate this strange new world.

Ultimately, Maya is triumphant on all fronts.

Second Act is so wildly disorganized, with characters doing things that are both highly irrational and hopelessly predictable. For example, Maya's first manager Mr. Weiskopf (Larry Miller) goes out of his way to belittle her when she dares to suggest she, with more experience, would be a better manager than Arthur (Dan Bucatinsky doing an Ed Helms from The Office impersonation).

When we next see him, it's at the company Christmas party, where I think he was brought in by Rob to unmask her (Justin Zackman and Elaine Goldsmith-Thomas' screenplay never makes how Weiskopf ended up at the party clear). I lean towards the 'Rob brought him' theory because as Rob and Maya are dancing, he all but pushes her to Weiskopf, I figure expecting him to back Rob up on his 'she's a fake'.

Again, for reasons both unclear and generally nonsensical, Weiskopf claims to have no idea who Maya is. Is he trying to protect her? Does he genuinely not recognize her? Is he as bonkers as the acrophobic Ariana or the cat-loving Chase?

Maya's clearly inept manner in business seems to both confuse and convince everyone of her business acumen. Already this seems wildly strange, but so is why Maya was hired.

Did Anderson know Maya was Zoe's birth mother before hiring her or was he unaware of the connection until after she was hired? Second Act seems to want to have it both ways, and worse, once the three of them know who is whom he lets Maya stay on, somehow hoodwinked into thinking Zoe's birth mother really did end up going to Harvard and Wharton. 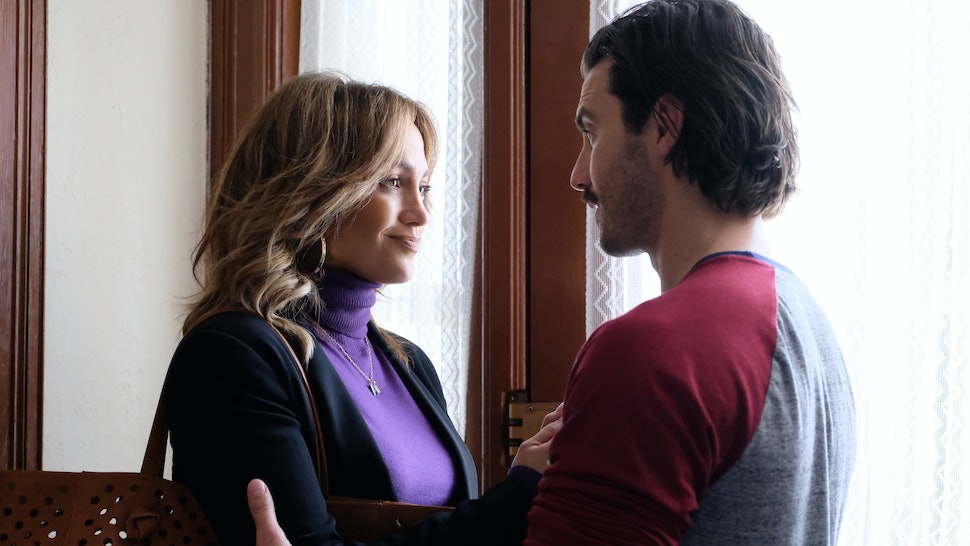 Perhaps if Second Act had stayed with just the 'finding long-lost daughter' story, we could have had something. Instead, we get this 'create this miracle product' competition that then becomes the focus. The ping-pong style of the film soon becomes boring.

I confess by the end of Second Act that I was falling asleep.

I think J-Lo was making an effort, and bless her for that, but I think even she knew the film was junk. Remini seemed to try and compensate for her cliched role of 'wacky yet truth-telling bestie' by all but screaming her lines. The story thread of her own potty mouth and efforts to reform it made her more annoying.

Also, can we have a moratorium on 'children cursing as source of hilarity'? It isn't funny no matter how many times filmmakers try it.

Maya's 'wacky best friends' trying to help is very sitcom-like. Ventimiglia's only contributions to Second Act is to show his character chewed gum as a defining trait.

For the longest time I tried to remember who Hudgens was as she looked familiar but her name constantly escaping me until the credits. She is pretty and did much better than most of her older peers. It is also not a good thing when you wonder if a film centered around Zoe and Maya or worse, around Ariana and Chase and their bizarre flirtations, would have been better.

Second Act is a farce but not in a good way. It wants to be hilarious and heartfelt but ended up as neither. Everyone, audience included, deserves better. I believe it was F. Scott Fitzgerald who said that there are no second acts in American lives. Would that those involved in this film taken him at his word.