For better or worse, a lot is riding on Aquaman, the newest entry in the DC Extended Universe. The DC Extended Universe has been pretty much a fiasco, every one of the films being awful save for Wonder Woman. It also does not help that Aquaman, again for better or worse, is seen as one of the more laughable superheroes, though I've always had a soft spot for our Atlantean prince.

Aquaman is in many ways a 'bad' film: unoriginal, excessively long and as my BFF Gabe pointed out completely cliched; despite this, I enjoyed watching it and won't apologize for my enjoyment.

Lonely lighthouse keeper Tom Curry (Temuera Morrison) finds a beautiful but injured woman on shore. She is Atlanna (Nicole Kidman), Queen of Atlantis. Eventually they fall in love and produce a child before she is forced back to the depths of the sea.

Their child, Arthur (Jason Momoa) grows into a large, muscular but surly man, aware of his dual identity but not keen on it, especially since the Atlantians murdered his mother. He would rather not get involved in Atlantian politics, but his hand is forced by Mera (Amber Heard), an Atlantian princess who fears for both her people and the Surface people.

Arthur's half-brother King Orm (Patrick Wilson) is plotting war against the Surface, though both his reasons and his methods are a bit muddled. He fights either to rule sea and land or revenge for pollution, and he can't do it without getting five of the seven kingdoms of the sea to join him so he can be Ocean Master or something.

The only way for Arthur to stop this is by finding the legendary Trident of Atlan and claiming his right to the throne. The Trident will proclaim him the truth King of the Seas. However, not only is Orm plotting against him, but there's also Black Manta (Yahia Abdul-Mateen II), who has his own grudge against Arthur and sometimes works with Orm.

There is the search, helped by Vulko (Willem Dafoe), Orm's vizer who also aids Arthur, and the search for the Trident goes to Sicily and the Sahara before ending in twists and turns leading to a climatic battle under the seas. 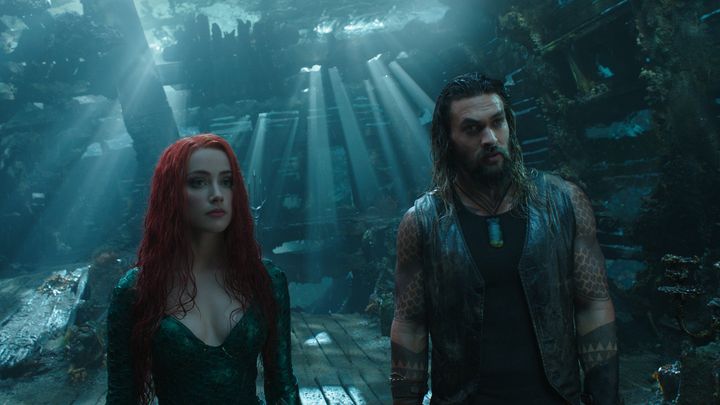 That plot synopsis, as choppy and convoluted as it is, is probably more coherent than the actual film. Aquaman suffers from a total lack of originality. For reasons known only to the filmmakers, the plot (such as it is) borrows from the Arthurian legends (Arthur has to 'pull the trident from the corpse') and unfortunately from others like Tomb Raider: not surprising given it sometimes looked like a video game. I did ask at one point if the film should have been called Quest for the Lost Trident.

It also borrowed from both Black Panther and Ant-Man & The Wasp.

I imagine that the last two really were coincidental given Aquaman was already in production when the rival Marvel films were being made/released; however, it is astonishing that no one at DC thought that viewers weren't going to at least notice that certain plot points were similar.

Moreover, it is amazing how no one: not its screenwriters or director James Wan, saw how disjointed and convoluted Aquaman was. It has another similarity to another comic book-based film: Spider-Man 3. Just like in that one, Aquaman has simply too many stories and worse, two antagonists that seem to get in the way of each other. The film tries to make the Black Manta/Orm teaming work, but it would have been better to have cut Manta out altogether, or at least minimize him.

It soon starts getting to where one forgets one of the antagonists whenever the other pops up. The endless expositionary dialogue and flashbacks that seem almost jammed into various spots do not help. We get a lot of aquatic politics that are of no interest but are treated as major Machiavellian plots.

One aspect that most worked for the film is the visuals. If anything, Aquaman is lavish with its Atlantian universe, bathing the film in lush colors. However, by the time we get the massive battle between Orm's forces and the Kingdom of the Brine (the last underwater kingdom holding out against Orm's war), it becomes visual overload. It was almost painful to be bombarded with so much.

I can report that the best performance was from Amber Heard, and if that doesn't raise alarm bells nothing will. I generally like Patrick Wilson and I figure that his Orm was deliberately over-the-top to where Wilson swallowed every scene whole with manic glee, as if he had been desperate to let out his inner camp. He was joined in the 'let's see how broad and silly' manner by Randall Park as Dr. Stephen Shin, the 'mad scientist' convinced that Atlantians are real.

Abdul-Mateen II was equally campy as Black Manta in perhaps what one can call a spoof of Black Panther's Killmonger. Kidman was breathy as this Queen. Dafoe just went along for the ride, trying his best to be a Yoda-like figure but looking a bit lost at sea.

I never thought Momoa was an actor (though I'd be curious to see what his Falstaff would look like). I will give him credit for at least rolling with things, not having to make Arthur Curry into anyone interesting save for his love for his father.

Aquaman, I think, is a response to criticism that the DC Extended Universe is glum, morose and dour. The film does make an effort to have laughs, even at its own expense. It isn't afraid of being deliberate in its stabs at humor, such an early scene where menacing toughs appear to threaten Arthur...only to end up asking for selfies.

There were some positives. Rupert Gregson-Williams' score was surprisingly elegant, particularly when it used electronic sounds. Granted, sometimes it tried to force the humor with 'cutesy' music but one can't have everything. It made good use of Depeche Mode's It's No Good but an awful remix of Toto's Africa thanks to Pitbull, screwing up a second film this year. Until it got too overblown, the visuals were pretty impressive.

Again, in many ways Aquaman is not a good film. However, I was entertained. It didn't reinvent the wheel but it serves as something separate from the bungled DC Extended Universe and not forcing it into a large mythos. No doubt Aquaman is not deep (no pun intended). It's too long, convoluted and campy.

Perhaps, however, that is why I didn't hate it: because in a sense it knew itself and didn't even try too hard. It knows it's all-wet.