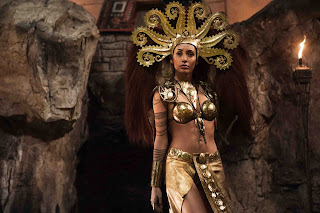 DA VINCI'S DEMONS:
THE BLOOD OF MAN
It is a curious thing that the Season Two opener for Da Vinci's Demons kind of flubs it to give us a preview of coming attractions. The Blood of Man has not a terrible start but after the curious opening kind of struggles to get back to where I think it should.
We open with a captured Leonardo da Vinci (Tom Riley) and Count Riario (Blake Ritson) preparing for death in what appears to be a Pre-Columbian world. Once we are about to see their killing, we then jump back to the chaos of the murder in the cathedral.
Poor Lorenzo de Medici (Elliot Cowan): dying from his slashed throat but too obsessed that Leo has been schtupping his mistress Lucrezia Donati (Laura Haddock) to care about his impending death. As they escape and fight, Leo comes up with a brilliant idea: a blood transfusion. Lorenzo is in no condition to give his consent (which he probably wouldn't), but Leo gets his way. In his own weakened state, he sees things that yet may be.
The Pazzi family is attempting to complete their coup d'état while poor Zoroaster (Gregg Chillin) and Lucrezia attempt to complete Leo's original mission of sailing beyond the known world. Unfortunately, Riario gets to the ship first and gets them to walk the plank. 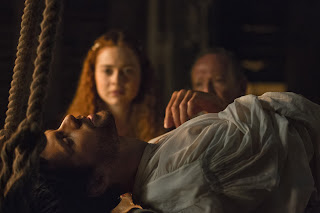 I think I can appreciate what The Blood of Man was going for, but somehow this "Leo and Riario are trapped by Incans" preview cut away from the tension that The Lovers had left off with. I think it is due to knowing that from now until we get this encounter with the New World, we know they will survive.
As such, part of me no longer feels any worry for whatever travails either of them goes through. I know they will live, so why worry about Leo's health?
Moreover, there were other aspects of The Blood of Man that I was not following. How did Riario get to the ship first? Why did we have to go forwards six months at all? Why can't Lorenzo be sensible for once and focus on how he is dying and his family may be summarily executed versus caring about whether Leo had sexy-time with Lucrezia?
I should resign myself to knowing Da Vinci's Demons will be violent, but there is something involving an eye in The Blood of Man that I thought went a bit overboard (no pun intended).
Still, I can't throw the baby out with the bathwater, and I think Da Vinci's Demons still has some strong performances. Riley and Cowan act exceptionally well together, and Laura Pulver as Clarice Orsini de Medici comes into her own. She ensures her daughters' safety while taking command in her husband's absence. James Faulkner is going to have a grand time playing both the wicked Pope Sixtus IV and his imprisoned brother Alessandro.
The Blood of Man would have worked better for me if it had started when I think it should have: amidst the chaos of the assassinations versus having a slow opening scene of Incan insanity. That weakened the episode for me, but I figure things will work better as we go on.
4/10
Next Episode: The Blood of Brothers
Posted by Rick at 4:09 PM