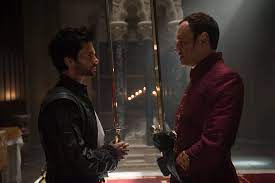 THE BLOOD OF BROTHERS

Now that Da Vinci's Demons has given us a strange destiny for our title character, we can focus back on the violence and sex of Renaissance Florence. The Blood of Brothers gives us surprising twists and even a bit of comedy among the murder and mystical mayhem.

Florence is still in the grips of chaos after the murders in the cathedral and the Pazzi coup d'état. Lorenzo de Medici (Elliot Cowan) is still hovering between life and death, but so is his frenemy Leonardo da Vinci (Tom Riley). Lorenzo and Leo both survive, but the former is both still critically injured and enraged at the latter schtupping his mistress.

As Clarice Orsini de Medici (Lara Pulver) attempts to hold on to her family's power while literally besieged, Leo comes up with yet another brilliant idea to rally the Florentines to the de Medici cause and reject the Pazzi coup. He creates an ability for Lorenzo to broadcast his voice over the people, who instantly rally to their leader and turn violently on the Pazzis. 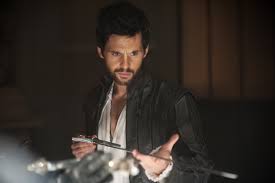 What I enjoyed about The Blood of Brothers is that the show is allowing a little bit of comedy within the crazed metaphysical hijinks. That comes primarily from Boardman's introduction as Vespucci, the man who somehow gave a whole continent a corruption of his first name: America.

Boardman brings a levity in his Amerigo Vespucci, a bit of a rake who fakes his death to get away from creditors. One wonders exactly how many times he has "died" to pull this off. With Boardman on board, so to speak, we can hope to see more of him in future episodes.

In some ways, The Blood of Brothers feels like two episodes tied into one. You have the resolution to the attempted coup with Lorenzo managing to rally to retake power. You then strongly transition to the new journey as Leo begins his race to follow Riario, and I give credit for being able to achieve the shift with little difficulty.

As a side note, I admire how Tom Bateman managed screen credit for appearing as a corpse. Must have been a nice paycheck to get paid for literally playing dead.

Pulver again is a standout here, as Clarice's strength and resolve dominates others who would put her down because she is both a woman and a Medici by marriage. Cowan could be slightly irritating as Lorenzo given how negative and almost coward-like he came across. Ritson is a surprise as Riario as he cavorts with Zita. One would not think he had any emotions or desires, but here he is giving in to the pleasures of the flesh.

I do question how Zoroaster and Lucrezia managed to get to shore given how it looked they were far off at sea, but I'm not going to quibble too hard on this point.

The Blood of Brothers is a step up from the last episode, as like a ship slowly correcting course. Giving us surprisingly less graphic sex than past Da Vinci's Demons episodes with a hint of the violence, I thought well of how the show is slowly moving.

Next Episode: The Voyage of the Damned