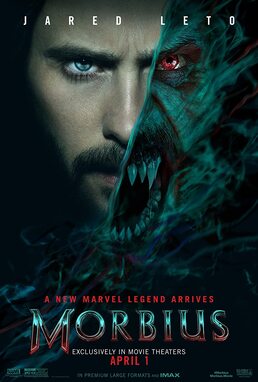 MORBIUS
Without a hint of irony, I can say that Morbius is astonishing. Astonishing in that the mind boggles over how alleged professional in film could make something simultaneously bland and horrendous. Morbius is somewhere between disaster and unmitigated disaster: rushed and incomplete, boring and nonsensical, it is a low point for the comic book film genre.
As children, Michael Morbius and his friend/"brother" Lucien aka Milo suffer from a rare blood disease. Twenty-five years later Morbius (Jared Leto) is a brilliant scientist who has developed synthetic blood to treat his disease. Convinced that vampire bats can help provide a cure, he procures hundreds of them to do his mad science experiments.
Despite the trepidations of his lab partner Martine Bancroft (Adria Arjona), he experiments on himself. Naturally, things go awry: Morbius becomes a vampire, with extraordinary physical powers. However, the blood lust disgusts Morbius and he begins a search for a safe antidote.
Milo (Matt Smith) has no qualms about living it up as a living undead. He kills with pleasure, enjoying his newfound physical freedom. The various killings are being investigated by Agent Simon Stroud (Tyrese Gibson) and his Boy Friday, Agent Rodriguez (Al Madrigal), the comic relief. The conflict between Michael and Milo will lead to a conflict between these ersatz brothers, where not all will survive.
In the two mid-credit scenes, Adrian Toomes from the Marvel Cinematic Universe Spider-Man film Spider-Man: Homecoming ends up suddenly in this universe; as Vulture, Toomes suspects Spidey had a hand in being in this strange new world. Meeting with Morbius, he suggests an alliance. 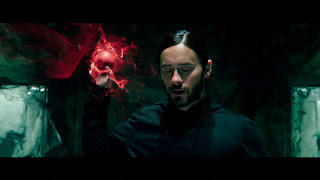 Ah, Morbius, trying to have its cake and eat it too. I can't think of a film, at least this year, that has bungled even the most basic elements of filmmaking as this one. Just about every element in Morbius is awful that it becomes difficult to single a good thing in the film.
It is not the acting alone. Leto makes Michael Morbius less a conflicted man than a blank figure. One would not be blamed if instead of a vampire, Morbius was revealed as a zombie given how dull Leto made him. Whether it is summoning vampires to help him fly (don't ask) or romancing Martine, he looks bored with it all.
Sadly, almost everyone save Smith, Madrigal and Gibson followed Leto's example. Arjona and Jared Harris as Michael and "Milo's" father figure looked as if they wanted to be anywhere but here. Smith figured he was in junk and went all-in on the camp. His villain, while with little rhyme or reason (was he independently rich or dependent on Harris' Dr. Nicholas) at least had some fun with things. Madrigal overcompensated with the comic relief in a desperate effort to inject some humor into something that was taking itself far too seriously.
Gibson on the other hand, somehow managed to be accidentally funny as Stroud, someone who tried to play the situation straight but instead made the preposterous nature of Morbius more obvious. 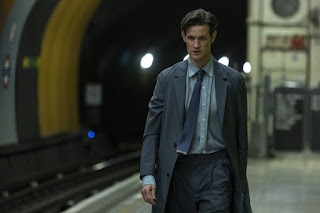 One can't blame the actors entirely. It is hard to make lines like "You don't want to see me when I'm hungry" any less ridiculous sounding. Matt Samaza and Burk Sharpless' screenplay gave no one except perhaps for Smith anything to really work with. The story needlessly jumps from present to past and back with no setup. We start with Morbius hunting vampires, then to his childhood, then to his sudden elevation to Nobel laureate.
Worse, when they are in Michael and Lucien's past, here things jump more. Michael just names Lucien "Milo" because he's seen so many ill boys that he can't be bothered to remember their names, but as soon as Milo 4.0 starts dying, he suddenly becomes frantic for someone he showed total disinterest literally seconds prior. Later on, we see Milo/Lucien bullied, jump to Michael asking what will happen to Milo, then see the aftereffects of Milo's bullying.
It does not make any sense, but Morbius does not care to make sense.
The visual effects look cheap, cheaper when they hide the gore to appeal to a PG-13 crowd. Efforts to tie this to a larger universe (probably the Venom-Verse) by throwing in The Daily Bugle fall flat. It is strange that Morbius feels simultaneously rushed and slow, waiting for something to happen as it flies by.
In some ways, Morbius feels like The New Mutants: cheap, a bit flat, and without much reason for being. The difference between the two is that The New Mutants was at least more aware of its limitations than Morbius was.
I have no interest in the ever-expanding multiverses of the various comic book films, finding things more convoluted in an effort to appeal to middle-aged teenage boys who refuse to let go of their childhoods. Morbius may be a quick fix between MCU or DCEU films, but expanding into these worlds is sucking the life out of cinema.
DECISION: F
Posted by Rick at 8:47 PM