Da Vinci's Demons: The Voyage of the Damned Review 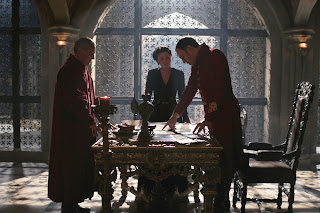 THE VOYAGE OF THE DAMNED

Things are starting to settle in Season Two of Da Vinci's Demons, with The Voyage of the Damned setting many plots forward. Good performances and threading plots elevate this episode.

It appears that Count Riario is seeking to go against the will of his uncle Pope Sixtus IV by commanding a ship go against its original plans. However, Alfonso, Duke of Calabria (Kieran Bew) is not fooled. Riario is unmasked as Leonardo da Vinci (Tom Riley), trying to pull a fast one. Even though he and his friend Zoroaster (Gregg Chillin) escape, Alfonso still has control of the ship.

No worries for Leo. He creates an early version of the submarine to catch up to it and use the slaves aboard to overtake the ship. Happily helping them is Amerigo Vespucci (Lee Boardman), despite thinking the whole thing mad. Or does he?

For his part, Pope Sixtus IV (James Faulkner) is surprisingly delighted that the Medici family has retained its hold of Florence. He is especially pleased that one of his bishops, Clarice Medici's own brother, was hung for treason. It provides him the perfect excuse to excommunicate all of Florence, which he and Lorenzo de Medici (Elliot Cowan) know will bring Florence to its knees unless the excommunication is reversed.

As Leo and Zoroaster set out on their way-out plan, Lorenzo begins his own to save his city, much to the dislike of Leo's father Piero (David Schofield). And that's not even counting the sudden appearance of Lorenzo's half-brother Carlo (Ray Fieron), whose plans are still unclear. 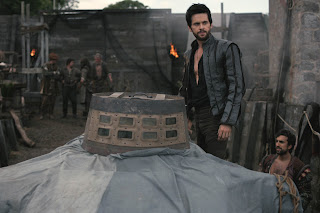 One of the positive aspects of The Voyage of the Damned is its opening. It gives Riley a chance to almost spoof Blake Ritson's soft, whispery Riario. Watching, I figured there was something slightly odd about how "Riario" was shot, but the vocal manner is pretty much on the mark.

Part of me imagines that Riley was having a grand time doing a Riario impersonation; it does also reveal that despite Da Vinci's Demons eccentric world, it is not afraid to have a little fun.

A lot of The Voyage of the Damned was just that: fun. Boardman's Amerigo Vespucci is fun, always managing to bring enough humor without being cartoonish. James Faulkner is fun. Not in a ha-ha way, but in how he is able to play two characters with equal ease. There is the wicked Pope Sixtus IV and then there is his imprisoned twin brother.

Riley is showcasing his Leonardo as a man who takes glee at his own genius, where even the risk of drowning is more inconvenience than dangerous. Granted, he does show slight fear when his calculations on his submersible are slightly off, but only slight. Besides, knowing that he is going to live, it cannot build up the tension The Voyage of the Damned wants us to have.

We even get Alexander Siddig popping up as "The Turk", though he is the only one not having any fun. The Turk is always such a downer, unable to have a moment of levity. I do also wonder what role Carlo will have, given we have never been given a single clue to his existence. That, however, remains to be seen.

The Voyage of the Damned is a good episode, having action, a touch of danger and even a few laughs.

Next Episode: The Ends of the Earth