Da Vinci's Demons: The Sun and The Moon Review 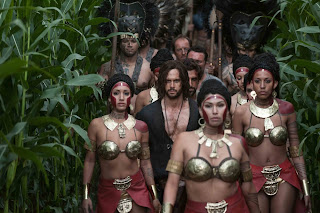 DA VINCI'S DEMONS:
THE SUN AND THE MOON

Who is to say that Leonardo da Vinci did not encounter Incas at Machu Picchu? Da Vinci's Demons long ago abandoned the idea that it was in any way historical. With The Sun and the Moon, we get more wild goings-on, some surprisingly not involving Leo cavorting with Incans.

Leonardo da Vinci (Tom Riley) along with his friend Zoroaster (Gregg Chillin), have come upon the New World in hopes of rescuing their friend Nico (Eros Vlahos). It is no surprise that they are captured by the Incans, who demand they go through a ceremony to choose life or death. Only Leo's quick mind and ability to understand their language quickly do they manage to survive.

Well, that and the attraction that Ima Kana (Carolina Guerra), the high priestess, has for Leo. She can speak their language, letting them know that other Europeans have been to Machu Picchu before, also in search of the Book of Leaves. Those Europeans also include Nico and Riario (Blake Ritson), their now-frenemy.

Back in Italy, Lorenzo de Medici (Elliot Cowan) finds himself prisoner of the mad King of Naples, Ferrante (Matthew Marsh), who is essentially insane. Lorenzo finds he has to play a dangerous game to have his audience with the King, who has a bizarre fondness for human taxidermy. While Lorenzo is attempting to survive this and making googly-eyes at his former love, Duchess Ippolita (Jeany Spark) much to her husband Duke Alfonso's (Kieran Bew) irritation, back in Florence the Lady Clarice (Lara Pulver) is fighting to control the Medici Bank.

She has an ally in her half-brother-in-law Carlo (Ray Fearon), bastard son of Cosimo. Carlo plays both sides of the game, but ultimately proves loyal to Clarice. He also proves an excellent lover, for in the "what's sauce for the goose" school, Clarice finally gives in to her own temptations. 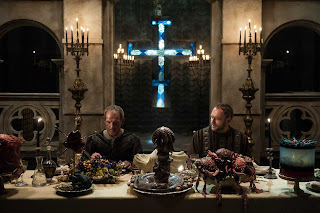 There is one issue that I don't think The Sun and the Moon thought much on. That is on the Kaliari challenge the Inca forced the travelers to play. The challenge is to choose from among three objects to see if they lived or died. Two of Leo's companions chose one object, which led to their instant (and rather violent) ends. Leo, however, managed to solve this riddle by using all three objects.

Again, given that in the premiere episode we know Leo will live, the only suspense is in figuring out how he will solve the problem. In reality, the issue is with Riario, Nico and Zita (Estella Daniels). They are prisoners of the Inca, so the issue becomes how they are still alive. Did they have to go through the Kaliari challenge too? Did Riario come up with the same answer and if so, how?

By presenting such an elaborate (and bloody) situation to end up having other characters just pop up, I felt not exactly cheated but more puzzled as to how one group is still around when more than likely they would have met a grisly fate.

Perhaps I am overthinking things, but that part of the plot just lies there, unanswered.

Still, a lot of The Sun and the Moon manages to make sense, at least in the "Leonardo da Vinci secretly traveled to South America as part of finding a mythical book containing esoteric knowledge" way. The episode also balanced three storylines without skimming on one or the other. 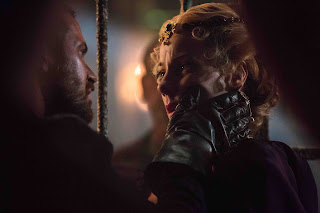 The smallest and maybe least interesting subplot is the Medici Bank attempted takeover. That was resolved within the episode itself, and one perhaps figured that The Sun and the Moon would play on Carlo's potential double-dealing. The eventual liaison between Carlo and Clarice too is also pretty much a given.

However, credit where it is due, and in The Sun and the Moon we get a nice bit of dialogue between Carlo and Clarice. When Carlo describes his situation as the result of being "a bastard with an unsuitable complexion", she replies that it is almost as bad as being a woman. It is curious that here, we get what might be considered a little commentary on race and gender without it being smashed above our heads.

The Ferrante subplot gives both Marsh and Bew a chance to embrace the cray-cray of the Neapolitan royal family with relish. Both of them show the delight King Ferrante and Duke Alfonso have in their combined cruelty and evil.

If I had an issue with The Sun and the Moon, it is on something that continues to trouble me: the graphic violence. The sex is surprisingly tame, at least for Da Vinci's Demons. The violence, however, is still too much for my liking. However, this show indulges in that, so I have to accept that it is not going to get any less graphic.

The Sun and the Moon is a strong episode, adding to the overall craziness of Da Vinci's Demons. Riario and Company somehow surviving aside, this episode moves the plots forward while not skimping on the sex and violence, two of Da Vinci's Demons calling cards.

Next Episode: The Rope of the Dead