Da Vinci's Demons: The Ends of the Earth Review 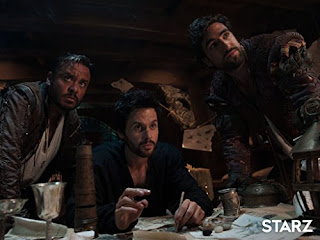 DA VINCI'S DEMONS:
THE ENDS OF THE EARTH

I was both pleased and troubled by The Ends of the Earth. There is a particular moment that, while reflective of evil, was to my mind a bit too graphic for my liking. I understand that Da Vinci's Demons is more graphic sexually and in violence than I like. However, some things are a bit too much for me to enjoy.

The wicked Pope Sixtus IV (James Faulkner) is holding his twin brother, the real Pontiff, hostage. Why not just kill him and be done with it? As children, then Francesco tried, but Alessandro survived and now the imposter thinks the good twin is unkillable. That, however, does not prevent Francesco from killing his own niece in front of her father in a flashback.

At this point, that even the "good" Pope has two daughters is something we need think on.

Lorenzo de Medici (Elliot Cowan) and Piero da Vinci (David Schofield) continue on to Naples in a plan to get aid in reversing the excommunication that Sixtus has imposed on all Florence. They are attacked by criminals and later captured by border troops.

Over at sea, Leonardo da Vinci (Tom Riley) is working to keep the remaining ex-slaves from thinking they will sail off the face of the earth. He cannot convince them with his evidence of a circular Earth, so he hopes a little astronomy will help. It majorly backfires, leading to tragedy and death. However, it does lead him to find to a major discovery: the Earth revolves around the Sun, not the other way around. 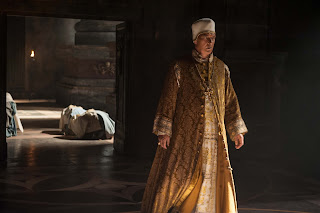 In many regards, The Ends of the Earth is a good, strong episode. You have excellent performances from Riley and Faulkner in particular. Seeing Leo's discovery of the solar system is a particularly strong bit of acting. Equally so is how Sixtus IV goes all Diana Ross by not having anyone look at him, coupled with him being a good and bad twin.

However, we see here at least two things that I did not think well of. First is the whole "good twin, evil twin" bit. I might have gone for a lookalike or impersonator, but did we need to have a literal evil twin? I am not impressed with what can be a bit cliche, even if Da Vinci's Demons is meant as ahistorical.

I like villains who are villains because they enjoy being villains. To be fair it does give Faulkner a chance to show range, be sympathetic and villainous. However, the "evil twin" bit just feels off.

Second, and more disturbing, is how we see the fake Sixtus dispatch his niece. For my mind, it was too graphic when an opaquer manner would have worked. I just dislike seeing children up to teens killed. It is curious that the mass deaths on da Vinci's ship and the killing of the bandits that waylaid Lorenzo and Piero were less graphic than the one the imposter Pope committed.

I am much distressed by the graphic violence not just on Da Vinci's Demons but from past shows like Gotham. That, however, is perhaps for another time. Suffice it to say that for the moment, this brought the episode down.

If not for that, I would have given The Ends of the Earth a higher rating. This is especially true given that it was nice to see Leonardo actually challenged in the firmest of tones by those around him. However, this is the highest score I can muster given what I saw as needlessly graphic violence.

Next Episode: The Sun and The Moon