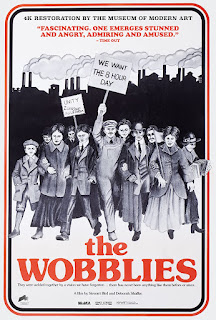 On this May Day, I think it would be appropriate to look at the restoration of the documentary The Wobblies. Using interviews and archival footage, The Wobblies gives a human, albeit biased, face to this labor organization that had a powerful impact on our world.

The International Workers of the World had a vision of uniting all labor under one big union, though this was unskilled labor (no accountants need apply). The nickname "Wobblies" more than likely originated from their initials, though one member recalls that it came from a "Chinaman" who could not pronounce "W" and said he was a member of "I Wobble Wobble".

For the record, the term "Chinaman" was his term, not mine.

Unlike the other major labor union, the American Federation of Labor (AFL), the Wobblies detested capitalism and could not bring themselves to cooperate with the current system. Firmly opposed to the wage system, contemptuous of the bourgeoisie, unwavering in thinking the workers should share the profits, the Wobblies struck from factories to lumber mills. The Wobblies did not discriminate, accepting all races into the union (hence the admission of the "Chinaman").

Hearing the experiences of those who lived through the years of the Wobblies' most prominent years, The Wobblies gives one an inside look at the members, who then were in their senior years. One discusses how she declined a date with a policeman who had fought against them. Another interviewee talks about how the lumberjacks endured not only bad food and no sleeping quarters, even the plates nailed to the table lest the workers steal them.

However, in the end public opinion turned against the Wobblies. The intensity of their tactics, down to sabotage, turned people against them. They also faced the perceptions of members as lazy (the organization's initials mockingly used to mean "I Won't Work" or "I Want Whisky"). Finally, the First World War and Palmer Raids brought the International Workers of the World from their prominence into something of a relic. 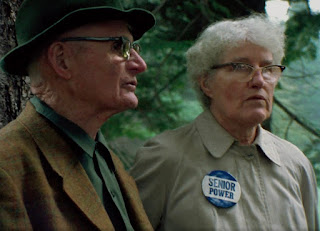 The Wobblies may have influenced the Warren Beatty epic Reds both in terms of subject and in how the latter had interviews with the surviving members. Witnesses, if you will. The Wobblies/Reds connection grows in that Roger Baldwin, an ACLU founder interviewed for Reds, serves as narrator for The Wobblies.

Part of me wonders whether someone so biased on the subject should have been the narrator. It makes The Wobblies look more an International Workers of the World promotional video than a series of reminiscences on how things were when they faced off for their beliefs.

What I found in The Wobblies, beautifully restored, is an interesting remembrance on their life and times. These lives and times are reflected for good: a parody of In the Good Old Summertime to In the Good Old Picket Line. They are also reflected for bad: using the term "Chinaman", the use of blues and harmonica to signify the "Negro" in the IWW.

However, The Wobblies is not a dry recitation of facts because we get the human face to this organization. Less about their socialist worldview and more about the interviewees' lives, The Wobblies is a bit dry but an interesting look into this now forgotten or little remembered world.