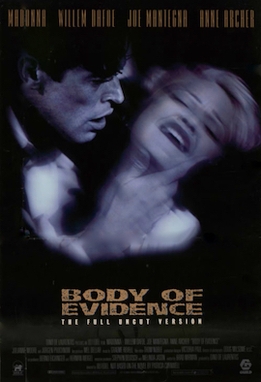 Rebecca Carson (Madonna) has been charged with murder. What is the murder weapon? Her own body. District Attorney Robert Garrett (Joe Mantegna) alleges that Rebecca used sex, mixed with some cocaine, to kill her much-older lover Andrew Marsh.

Did she do it (murder, not sex, because there is a sex tape)? Her defense attorney Frank Dulaney (Willem Dafoe) does not ask, but it is not long before the married Frank is seduced by our femme fatale. Rebecca is into a little S & M, bondage and pouring wax, luring Frank into her sordid web of sex games.

This makes defending her difficult. This is made harder thanks to witnesses such as Marsh's loyal secretary Joanne Braslow (Anne Archer) and a former lover Jeffrey Roston (Frank Langella). The latter, who like Marsh had a weak heart but unlike Marsh got heart surgery, gives evidence suggesting she might have tried murder through sex on him too. More "shocking" twists take place until Body of Evidence ends with the real murderess revealed and getting her due. 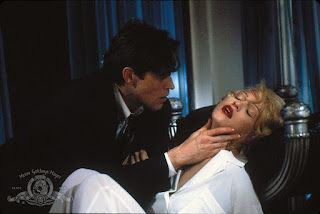 There is something of a plot in Brad Birman's script, but Body of Evidence is choppy, muddled and shifts from murky to laughable from one scene to the next. For example, Frank is seeing with Sharon (Julieanne Moore) and Michael (Aaron Corcoran), but Body of Evidence never makes clear that they are married until well into the film. I thought they were just dating, and that Michael was Sharon's son from a prior relationship. We don't find out Frank and Sharon are married to each other until she confronts him about burn marks on his body.

Given that in an earlier scene, he used a towel to cover up his burn marks, how and when did Sharon discover them? Sharon confronts Frank about his liaison after Rebecca calls him, but according to Sharon, Rebecca never actually said they had an affair. In fact, Sharon discovers the indiscretion merely by the way Rebecca says "Frank".

As a side note, Michael is never seen or mentioned again.

Body of Evidence just rushes through things, never bothering to explain anything. Whether it was done to try and "surprise" viewers or through laziness, you marvel at the pretty much bonkers story. We very late in the film discover that the sex tape had something of a bonus feature: a clip of Joanne, nude, that Marsh had shot himself. Apart from wondering why a fellow attorney would bother watching a tape after it had appeared to have ended, one wonders why Joanne having a relationship is a shock.

Over and over, things are introduced that become more and more oddball. Dr. Paley (Jurgen Prochnow) is later discovered to have dated Rebecca! If it is a shocking twist, it was rather convenient to have Frank play voicemails from Paley to Rebecca at the ready. On the stand, Rebecca reveals she ended her affair with Rolston because she found him in bed with another man! Rolston, surprisingly still in the courtroom days after giving his testimony, only rises and nods at the allegation. 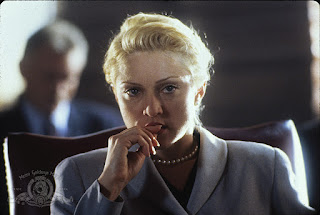 Rebecca and Sharon immediately recognize each other in the ladies' restroom, but as far as we know neither actually knows what the other looks like.

Logic, it seems, is not what Body of Evidence is interested in.

Instead, it is about the not-quite-graphic sex scenes between Madonna and Defoe, particularly ones involving hot wax. They are to be fair, shot in an artful style by director Uli Edel, but he should have spent more time directing his actors than setting up Playboy-lite sequences. Madonna displays her body, but nothing else in terms of acting. 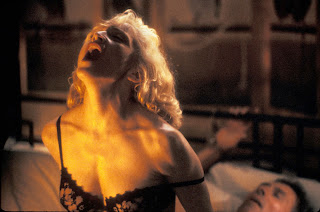 She speaks her lines with disinterest, in the same way regardless of whether she is seducing dumb men or defending herself. Sometimes, it looked like was on the verge of giggling her way through her dialogue. Anne Archer was clearly embarrassed to be there, being almost zombie-like in her performance. It looked more like someone trying to get through a hostage video in an effort to escape than a genuine effort to act.

Moore tried, but there is only an actress of her talent can do with such a silly script. Dafoe too made an effort, but like Moore could only get through it with as much dignity as he could muster. He is not believable as a man fallen to temptation. Mantegna, I think, had the right idea in Body of Evidence: ham it up for all its worth and have fun with something so utterly preposterous. He seemed to have figured this was nothing more than a Madonna vehicle, so instead of fighting it, Mantegna opted to show his cynicism for it all.

Perhaps he saw how the light always hit Madonna's eyes and decided if the film was not going to try and be good, neither should he.

After watching Body of Evidence, it ends up coming across as a bad Basic Instinct knockoff. It does not help that Basic Instinct was released a year prior to Body of Evidence. This is a terrible film, yet I found it in some ways funny in its efforts to be so serious and neo-noir. The ending in particular had me laughing thanks to the performances and the actual conclusion.

Blessed with bad performances, a muddled story, delightfully lacking in logic, I am surprised that Body of Evidence hasn't become either a cult or midnight film. This is less a body to die for and more to laugh at.