Da Vinci's Demons: The Rope of the Dead Review 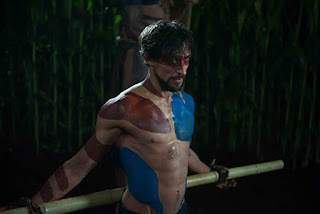 THE ROPE OF THE DEAD

Sworn enemies are forced to unite in The Rope of the Dead, where we learn that sadism is an international and multicultural trait. A mostly good to great episode, we have however, the excessive graphic violence of Da Vinci's Demons that for me is most troubling.

In the New World, Incan high priestess Ima Kama (Carolina Guerra) tasks Leonardo da Vinci (Tom Riley) and Count Girolamo Riario (Blake Ritson) to essentially join forces if they are to get closer to the mythical Book of Leaves. For Leo, it means getting bit by a poisonous snake which causes him to both have sex with Ima and enter the netherworld where he meets the dead. There, the dead will guide him to clues about how to acquire the Book.

For Riario, it means searching for the antidote. The task entails becoming the hunter and the hunted, fighting Incan warriors whom he has to kill in surprisingly gruesome ways. Ultimately, while he emerges triumphant, to get the antidote, he must sacrifice the only love he has.

Back in Florence, Lorenzo de Medici (Elliot Cowan) must endure torture physical and psychological from the bonkers Royal House of Naples. Lorenzo gets advice from his dead brother Guiliano (Tom Bateman) on how to survive mad King Ferrante's (Matthew March) plan before Ferrante will give him a formal audience. Lorenzo has one arrow to kill a horse tied to a rope, otherwise the slack will eventually run out and hang him (or snap his head off). Only one person has survived this test: Ferrante's heir Alfonso, Duke of Calabria (Kieran Bew).

Finally, Lucrezia Donati (Laura Haddock), on her way to Constantinople, has an encounter with Al-Rahim, better known as The Turk (Alexander Siddig), who will help her get to the fabled city as part of both their plans to get help from the Ottoman Turks against the usuper Pope.

Both Leo/Riario and Lorenzo manage to survive, with a little help from the dead. 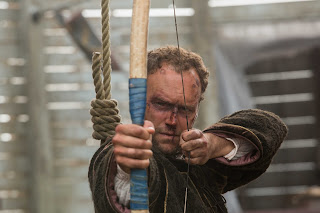 I have commented on what I think is the excessively graphic violence on Da Vinci's Demons, something that has concerned me. The graphic violence is something I commented on with regards another show, only Gotham was on network not premium television. Violence as depicted on television has, to my mind, become not just more and more graphic. It has become almost sadistic in its portrayal, close to, as I see it, encouraging viewers to either passively or worse, actively enjoy it.

The Rope of the Dead went far beyond anything I am comfortable with. We saw graphic decapitations, head snapping, intense stabbings of various body parts. I am not opposed to violence on screen. I also know that Da Vinci's Demons has set itself up to be violent as part of its world-building. However, The Rope of the Dead for me went way overboard in what it chose to show. It would not have taken away from my enjoyment if it had opted to be less graphic and more suggestive. A lot of what I saw could have been toned down or not shown to the degree it was.

I suspect that both in succeeding episodes and Season Three we will see equal or even more graphic violence, which troubles me greatly. 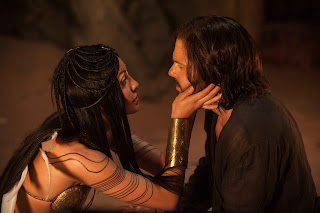 It is a shame, because a lot of The Rope of the Dead worked quite well. Of particular note was the visualization of the netherworld between life and death, which was beautifully crafted and filmed. The episode also gave Riley and Cowan some of their best material, particularly the latter. This episode gave Lorenzo a chance to genuinely grieve his brother, to metaphorically release his own demons at both Giuliano's death and the knowledge that despite being the older he will outlive him, perhaps for decades.

Riley and Ritson too excelled, their own confusion and grief really pushing things forward. Granted, it did make me giggle that Leonardo would need to have sex with a beautiful Incan high priestess in order to achieve connection to the netherworld. The guy finds new reasons to indulge his sexual powers. It also was amusing to see the end turn into a bit of a Battle of the Six Packs between Riley and Ritson (I think the latter would be the winner).

Tom Bateman in a guest spot served as guide to not one but two figures, and The Rope of the Dead gave him a chance to overact to the point of being theatrical. However, given that his character is dead, I can cut him some slack in his over-the-top manner. Not so Estella Daniels as Zita, Riario's love interest. It is a shame that she too will be relegated to a ghost, for I think she could have developed into a fascinating character.

The Rope of the Dead gets major points deducted for its violence. If not for that, I would have ranked it higher, but minus the almost sadistic nature of the visuals, I thought highly of the episode.

Next Episode: The Vault of Heaven