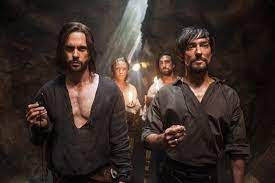 DA VINCI'S DEMONS:
THE VAULT OF HEAVEN
Perhaps my lack of enthusiasm for The Vault of Heaven is due to what is a pretty cliched situation: the many-trapped vault. I can roll with this up to a point, but my major takeaway here is, "Why do temples holding secrets always need so many clever traps?".
Leonardo da Vinci (Tom Riley) and Count Riario (Blake Ritson) are forced to join forces to find the mythical Book of Leaves, suspected to be hidden within a well-guarded Incan cave. Along with their companions Nico (Eros Vlahos) and Zoroaster (Gregg Chillin), they must go through various traps which Leonardo solves with some ease. Once they get to the final test, Leo hears his mother's voice coming from inside. However, as he went ahead without Incan High Priestess Ima Kama (Carolina Herrera) despite his promise not to, they are all to be executed.
Back in Florence, Clarice de Medici (Lara Pulver) is continuing her affair with her half-brother-in-law Carlo (Ray Fearon). A tryst, however, is a true coitus interruptus when ninjas descend from the roof to try and kill them, along with Vanessa (Hera Hilmar), who carries the late Guiliano's child. Who could be behind the plot, and why?
Finally, Lucrezia Donati (Laura Haddock) has reached Constantinople, where she has an audience with Bayezid (Akin Gazi), the younger son of the Sultan. She hopes to get him to go to Rome as part of her plan to get the real Pope Sixtus IV, her father, back onto St. Peter's Throne. However, like Leonardo, she finds herself a literal hostage to fortune. 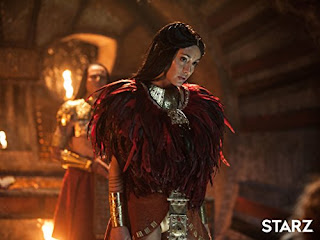 Good or bad, I could not help thinking of Legends of the Hidden Temple while watching The Vault of Heaven. All that was missing was the Temple Guards popping out to scare Nico.
I was not overwhelmed with the idea that the Book of Leaves is guarded via elaborate traps, finding the concept slightly comical. Somehow, it seems now slightly looney that the Incas would simultaneously want someone to find the Book of Leaves to save their society and make it so difficult that any effort to get to it will get you killed. We see others have tried, but some traps seem so outlandish that I chuckled versus feared.
We also have the issue of ninjas storming the Medici Palace. Granted, they were not literally ninjas, but their tactics were very Ninja-like. It makes things slightly hilarious versus scary.
What does lift The Vault of Heaven are the performances, which continue to be excellent. Riley and Ritson work so well together as these frenemies, joined in a cause but having no love for each other. In a smaller subplot, James Faulkner oozes villainy with brilliance as Pope Sixtus IV. Commenting on the issue of temptation, he remarks that the sin is not in its existence but in its worship. Haddock also does well as Lucrezia, attempting to hide her character's fear behind an image of strength.
Still, the entire booby-trapped Incan maze deal is a bit hackneyed. Where art thou, Olmec?
4/10
Next Episode: The Fall from Heaven