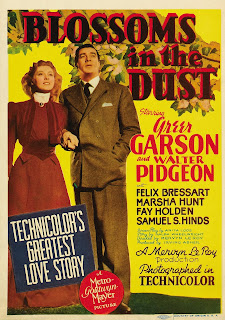 BLOSSOMS IN THE DUST
Biopics are hard enough when the film covers a famous person, let alone a more obscure subject. Blossoms in the Dust not only opts to tells the story of a lesser-known figure, but one who was very much alive when the film was released. Remembered now more for being the first screen pairing of one of the Great Duos, Blossoms in the Dust is respectable, even moving, albeit a touch manipulative.
Edna (Greer Garson), engaged to one man, is swept away by the passionate ardor of Texan Sam Gladney (Walter Pidgeon), whom she marries. Her adopted sister Charlotte (Marsha Hunt), however, cannot marry the man she loves. She is a "foundling", and her potential in-laws won't agree for their son to marry someone of illegitimate birth. The shame causes a suicide, one that haunts Edna.
Also haunting Edna is the loss of her own child. Edna does the best she can, and sees that too many children are starting out life in poor circumstances through no fault of their own. Stigmatized due to the word "Illegitimate" on their birth certificate, Edna sees how foundlings are shamed through life. She also sees the difficulties of widowed and working parents who, despite loving their children, cannot fully provide for them. With her usual can-do attitude, she decides to change the Texas law that marks a child's background. Despite opposition from those fearing out-of-wedlock births will explode and her own personal tragedies, Edna Gladney changes the world for the better. 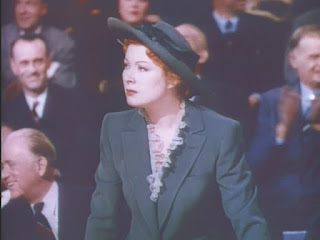 Make no mistake about this: Blossoms in the Dust is a starring vehicle for Greer Garson, and she goes all-in with her performance. When she boldly stands up in the Texas legislature chamber and makes her embolden cry, "There are no illegitimate children. There are only illegitimate parents!", it is someone determined to almost devour the screen. To be fair, this is meant as a big moment, and thus I can grant a little leeway here.
I am also slightly amused that, despite being from Wisconsin and living in Texas all those years, the Edna Gladney that Greer Garson portrays speaks with a strong British inflection. I doubt anyone really thought much that this Midwesterner sounded more like Downton Abbey than Green Bay Packer. We can also ignore how despite the years, Edna never ages, making her youthful scenes slightly ridiculous.
All that being said, I was won over by Greer Garson's performance. There is a steel resolve under her velvet glove, a woman who sees a wrong and is moved to work to change it. Blossoms in the Dust does give her motivations that did not really exist (there was no adopted sister and Gladney never had any children of her own), but these bits help shape her motivation. At times, Garson was a bit theatrical, but she kept my attention throughout.
Other elements, such as how glamorous she looked despite allegedly giving birth, are more the MGM shine to their stars than Garson's fault. 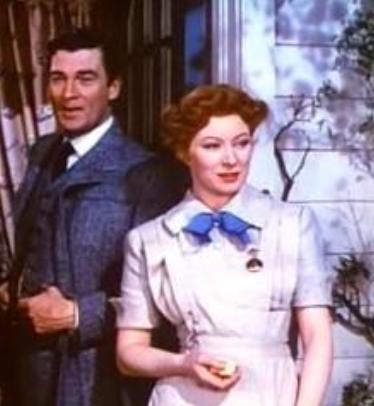 Blossoms in the Dust was also the first time Garson was paired with Walter Pidgeon, starting their collaboration that totaled eight films. While perhaps not as well-remembered as the pairing of William Powell & Myrna Loy or Spencer Tracy & Katharine Hepburn, Pidgeon & Garson made an excellent team. Her elegant and refined manner and his dignified but slightly more casual one blended well. As Sam, Pidgeon was as convincing a Texan as any Canadian.
However, he had a slightly impish charm as Sam, someone who had a great optimism and love for Edna. Sam was not going to be down, even when things look bleak.
Other roles, such as Hunt as the tragic Charlotte and Felix Bressart as the slightly dotty but quite wise Dr. Max Blessar, add to the feel of dignity in Edna Gladney's story.
Blossoms in the Dust allows for moments of gentle humor in what could have been a more serious, even somber tale. There's a running gag about an ugly vase that ends up almost touching, and the film does well in moving things forward via montages. The film also has Oscar-winning sets that give character insight, such as having grey tones throughout when the Gladneys are facing deep financial difficulties.
A surprising element in the film is how it does not discriminate when it comes to race. In a recitation of orphans to persuade a prospective father, Edna lists not just Andrew and Stonewall Jackson but also Booker T. Washington, all their faces prominently displayed on the walls. There is also a brief scene where she delights her black servant Zeke (Clinton Rosemond) by bringing two black babies to her orphanage. Granted, some moments here are not as forward as one would like, such as how Zeke and their maid Cleo (Theresa Harris) still speak in a certain dialect. However, noting that Gladney did not discriminate is a step in the right direction.
In many ways, Blossoms in the Dust is a bit theatrical and surprisingly fictional. Characters are invented, events shown do not happen. However, you end up admiring and respecting Edna Gladney, seeing a heroine who took action. She showed that one person, armed only with a firm conviction and determination, can affect change. Edna Gladney's story is one that should be better-known. It might be time for a remake, one that hopefully would be more historically accurate while still inspiring others to make positive changes for others.
DECISION: B-
Posted by Rick at 7:22 AM