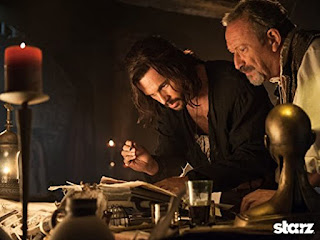 THE ENEMIES OF MAN

As we finally arrive back in the Old World after our Incan encounter, we see that Da Vinci's Demons still goes all in on the cray-cray. The Enemies of Man brings us a bit of a downer ending and given that we're only one episode from the finale, it does not bode well to see an upbeat one.

Now that we've left the Amazon, Leonardo da Vinci (Tom Riley) finds that things in his beloved Florence are now worse than before. The city is now in the hands of corrupt and sleazy Duke Federico (Vincent Riota). Holding Clarice de Medici (Lara Pulver) hostage, the city is in despair, thrown into chaos. How will Leo liberate his libertine city? The way to do so is not without a brutal cost, as Leo's mentor and friend must pay the ultimate price when they learn that Carlo de Medici (Ray Fearon) is the mysterious Labyrinth, who seeks revenge against the Sons of Mithras. It was Carlo, not the Abyssinian, who traveled to Macchu Pichu

Meanwhile, Count Riario (Blake Ritson) is a man broken by guilt and emotional turmoil; he is saved from a suicide attempt after his uncle, Pope Sixtus IV (James Faulkner) mocks his pleas for spiritual forgiveness. He soon finds himself being emotionally and psychologically tortured by those who saved him, a spent and distraught figure. 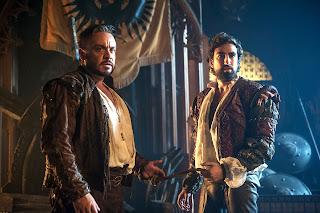 Perhaps it is because a lot of time has elapsed since I've seen the episodes, but I find that The Enemies of Man and the following episode are blending together. There certainly is a lot going on here, and to their credit some of the performances are simply brilliant.

At the top of that list is Ritson, who has shifted from whispering villain to a tragic figure. As Da Vinci's Demons has progressed, he has stolen the spotlight from the equally hunky Riley. I think it is due to how their characters have evolved.

Riley's da Vinci has remained pretty much the same: cocky, arrogant, catnip to every woman he comes across. Riario, however, has evolved from a coldblooded figure into an emotionally battered one, driven by genuine desires of blind loyalty only to find that the cost of following his faith has been a high one. Thinking he was saving souls, he was instead destroying his own.

It is a wonderful thing to see, which is why I am more impressed by Ritson than by Riley. It is not that Riley has slacked off: the sight of his friend, mentor and father-figure dying before his eyes is a strong bit of acting. It is, however, that he does not have many opportunities for such displays.

I thought well of The Enemies of Man, though at times it veered close to slipping into farce. Of particular note is when we see Clarice, who looks like the medieval version of Princess Leia's slave girl from Return of the Jedi. The episode is dominated by darkness and greys, which is fitting for such a downer of an episode and the generally bleak situation. Perhaps they went a bit overboard in the portrayal of Florence as a truly desperate city, but it is not a hill I'm willing to die on.

The Enemies of Man packed in a lot of stories in its running time. I thought it was good not great, but a strong lead up to the season finale.

Next Episode: The Sins of Daedalus