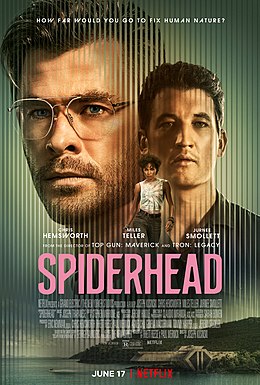 The past few years has given us the mantra of "trust the science". Spiderhead, for its part, makes the case that science can still run amok, and that human frailty can still bring destruction on itself.

Jeff (Miles Teller) is serving a sentence for a crime that resulted from his irresponsible actions. However, he and other inmates at the Spiderhead facility have an extraordinary amount of freedom, almost Scandanavian. Why? They have agreed to be guinea pigs for new drugs overseen by Steve Abnesti (Chris Hemsworth), who gives them various mood-altering chemicals whenever they acknowledge consent.

There's G-46/Laffodil, which causes the subject to laugh even when told of tragedy. N-40 or Luvactin overrides their sexual inhibitions to where arousal and sex abound. Not every chemical, however, is jolly. The most dangerous so far is Darkenfloxx, which overwhelms them with regret and anger and violence.

Jeff knows about Darkenfloxx, which is why he will not acknowledge using it on Izzy (Jurnee Smollett), the fellow inmate/cook whom he is attracted to. He does agree, very reluctantly, to its use on Heather (Tess Haubrich) with horrifying results. Here, Jeff learns the true nature of Steve Abnesti, setting off a chain of events that send the facility into eventual chaos. The truth of B-6, whose reason for being had not been revealed before, is also exposed. Abnesti dubs B-6 OBDX or Obidiex, and it becomes a desperate race to escape this mad lab.

Spiderhead, adapted from the short story Escape from Spiderhead, has some excellent ideas about the blindness of science and the greed that it can fall into. It, to be fair, does not go into new territory with its story. You have the seemingly benevolent figure, the young man taken in by a mix of regret and desire to improve, the pretty young thing who harbors a deep, dark secret.

However, director Joseph Kosinski keeps things well grounded. Of particular note is Spiderhead's aesthetic. There is a sparseness to the film, an almost clinical manner to things that keeps simple. We are not given large set pieces or large moments apart from Heather's shocking act when she accidentally is overdosing on Darkenfloxx.

The film benefits tremendously from some of the performances. Like Kosinski, Miles Teller scores another excellent film after their triumph in Top Gun: Maverick. Jeff is a haunted figure, filled with regret and pain. It is understandable why he would agree to the experiment separate from the knowledge that participation will reduce his sentence. Teller has at times struggled in his career such as when he attempted to be a superhero in the 2015 Fantastic Four film.

However, he now is reminding us of the immense talent he showed in The Spectacular Now and Whiplash. Jeff is not a sad sack, but one who is motivated to correct what he can to the best of his abilities. Tormented but wise, hoping to free himself from the past, Teller makes Jeff a figure the audience will support.

While their roles are smaller, both Smollett as Izzy and Haubrich as Heather hold their own. Smollett's performance shows Izzy as sensible, kind and compassionate, making the reason for her imprisonment both shocking and tragic. Heather, for her part, has moments of comedy when she acknowledges sex with Jeff via N-40 but also horrifying when she is overwhelmed with Darkenfloxx. 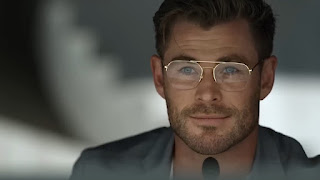 Rhett Rees and Paul Wernick's adaptation, however, fails when it comes to Hemsworth. From his forced pleasantness to doing an almost balletic dance to Roxy Music's More Than This, Hemsworth came across as goofy. Based on his performance, I would not blame people for thinking that Spiderhead was a comedy. I cannot take seriously a villain who is worried that that Mike Wallace, Ed Bradley and Morley Safer will all expose his actions, unaware that they are all dead.

The music does not help. I do not mean the score, but the myriad of pop songs that populate Spiderhead. I do not know why Thomas Dolby's She Blinded Me with Science had to start pumping out near what is meant as a serious moment. It took away from the seriousness that Spiderhead wants to push. The film has a lot of songs that somehow got in the way. So did a running gag with a feces-obsessed inmate that is revealed at what is meant as the climatic escape.

This brings Spiderhead down, as does the various drug names. Laffodil for laughter. Luvactin for wild sex. Darkenfloxx for despair. Phobica for creating irrational fear. Obidiex for total control. Inadvertently or not, Spiderhead reminded me of Kids in the Hall: Brain Candy. That film also used a pharmaceutical company whose product appeared first benevolent but ended destructive. Even the drug's name is meant to be funny: Gleemonex. Spiderhead's curious drug names are both too on-the-nose and unintentionally hilarious.

This, along with a weak ending, bring Spiderhead down. However, there is just enough to make Spiderhead worth a look.