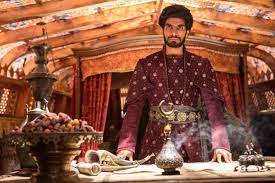 It says a lot about medieval Italy when an invading Ottoman armada is one of the lesser problems they face. The Sins of Daedalus, which closes out Season Two of Da Vinci's Demons, packs in a lot with excellent results. Thrilling, sometimes shocking, it carries a lot of stories that one hopes will come to a great conclusion in Season Three.

As Florence recovers from its occupation, we find that Nico (Eros Vlahos) is a shrewd figure. No surprise, as his full name is Niccolo Machiavelli! His cleverness is needed now more than ever, as Vanessa (Hera Hilmar) finds herself as the Regnant of Florence. This is not a position she wants, preferring to retire quietly along with her new son. However, her new son is a Medici, and the only male Medici around. Clarice (Lara Pulver) has disappeared after the chaos of the occupation, and Lorenzo (Elliot Cowan) is in Naples.

Apparently, everyone else is in Naples. The battle between the Florentines Lorenzo and Leonardo da Vinci (Tom Riley) and the joint alliance of Pope Sixtus IV (James Faulkner) and whacked-out King Alfonso (Kieran Bew) must put aside their differences and join forces against a greater threat. The Ottoman Turks are fast sailing towards the Neapolitan kingdom, determined to begin the conquest of Europe. Bayezid (Akin Gazi), the Sultan's son, is eager to take revenge against the Pope who not only scorned him but humiliated him out of Rome. With Lucrezia Donati (Laura Haddock) forcibly serving as envoy, she gives the Christians the ultimatums: surrender the country to Bayezid and to Islam or else.

Leo won't take the "or else" bit lying down, and neither will the rest of them. It is as the ships begin to approach that Pietro da Vinci (David Schofield) gets the shock of his life when he looks through the spyglass. The sorceress and soothsayer serving the Sultan's son is none other than Leonardo's mother! 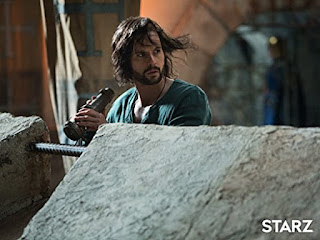 The Sins of Daedalus throws a great deal at us, leaving us with many loose ends. We have Vanessa as the de facto ruler of Florence, the real Pope Sixtus having left his prison, Count Riario (Blake Ritson) as the newest member of the shadowy Enemies of Man. It has so many stories flying hither and yon, yet it never loses its balance on any of them.

The pacing never lets up as The Sins of Daedalus jumps from one story to the next. From the arguing among the various Italian leaders to how Nico manages to outwit the Florentine elite with some Machiavellian maneuvering, one never feels shortchanged in terms of plots.

That, however, may not work well when it comes to the performances. No, the performances are pretty good to great. We have many strong performances all around, and even when we have smaller parts such as Sasha Behar as "the Seer" we see strong actors doing strong work. The problem is that we get little bits where they do not get enough time.

I grant that as the season finale, we have to put a lot of things and open up that third season.

However, on the whole I found The Sins of Daedalus moved well, has strong performances and manages to leave things with enough endings to get us to a Season Three.

Next: The Complete Second Season