The Adventures of Prince Achmed: A Review 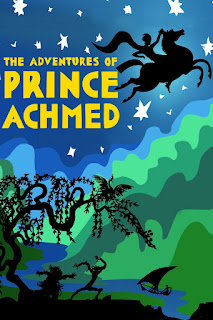 THE ADVENTURES OF PRINCE ACHMED

The film is made up of five Acts. An African sorcerer goes to Bagdad to present his latest creation: a flying horse. The Caliph is impressed but cannot persuade the sorcerer to present it as a gift. For what would the sorcerer sell it for?

For the beautiful Princess Dinarsade, who is already married to the long-lost Aladdin (though we do not learn that until later in the film). The Caliph is horrified, and her brother Prince Achmed is equally appalled. Nevertheless, the Prince agrees to ride the flying horse.

Bad idea, for the horse takes him far off, away from Court and to the island of Wak-Wak. From here, Achmed falls in love with the beautiful Pari Banu, Queen of Wak-Wak. The sorcerer, however, will not be denied. Magically escaping the Caliph's prison, he finds Achmed and Pari Banu, abducting the latter to sell to the Chinese Emperor.

Achmed now must fly to China and later to other parts of the world, aided by Aladdin and a good witch, to ultimately defeat the sorcerer and save Pari Banu. 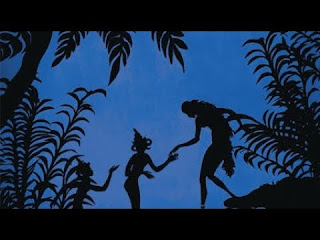 The Adventures of Prince Achmed, in a technic sense, is a lost film. The version we have now is put together from surviving elements of the original German film. However, Prince Achmed as it stands now has some beautiful animation. It was a painstaking process, as it is not a hand-drawn animated film, but one made up by silhouettes. I do think that the sequences involving Aladdin's genie are hand-drawn, or at least look so visually splendid and original that it puts more recent animated films to shame.

Again, there are some beautiful sequences in Prince Achmed, complimented by Wolfgang Zeller's score. The wizard's duel between the witch and the sorcerer is visually impressive.

As a side note, one can imagine that the makers of The Sword in the Stone drew inspiration from the battle between good and evil.

The color elements, such as blue for night or yellow for China, add more beauty to the film. Granted, perhaps portraying China in yellow could come across as perhaps stereotypical, though I think it was not an intentionally insensitive decision. Perhaps a poor one from today's perspective, but it does not take away from its overall beauty. 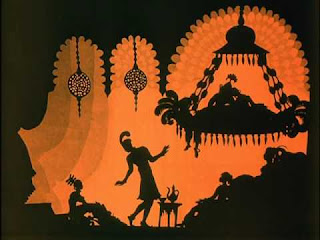 Same goes for the African sorcerer. It does look now a bad decision to make the villain African, but again I cannot say for certain that there was any malicious intention.

The story, while fantastical, at times does feel repetitive. How often can Pari Maru be abducted? There are times that make one wonder if Prince Achmed could be shown to children. When he first arrives in Wak-Wak, Prince Achmed is all but cavorting with a bevy of beauties, all of whom desire to devour him. It's pretty risqué for the times.

Children, I imagine, will also be put off by both the lack of speaking and the German subtitles. I would argue though that Prince Achmed is not made for children. If anything, it would be for families or even adults.

Fantastical, visually splendid, and with a beautiful score, The Adventures of Prince Achmed should be better known separate from it being the oldest known surviving animated film. Credit to writer/director Lotte Reiniger in crafting this film, blending art and adventure in an elegant package. While the film will probably find more viewers interested in either film history or artistic endeavors, The Adventures of Prince Achmed is still a nice distraction from larger but empty animated films.