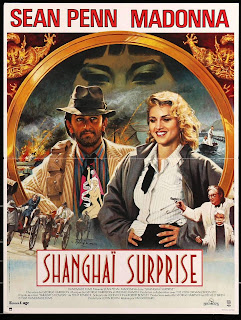 SHANGHAI SURPRISE
Upon its release Shanghai Surprise was painted as one of 1986's biggest bombs and one of the worst films ever made. Now, with nearly forty years since it became infamous having passed, perhaps one can look at Shanghai Surprise free from its notoriety. I confess to enjoying Shanghai Suprise, as well as finding it a pretty bad film.
In 1937, mysterious opium smuggler Walter Faraday (Paul Freeman) disappears in Shanghai. A year later, prim and proper Helping Hands missionary Miss Tatlock (Madonna) is told by her superior Mr. Burns to hire Glendon Wasey (Sean Penn) to help her find the lost opium stash. Wasey has no interest in searching for "Faraday's Flowers", which he dismisses as a myth. However, Tatlock is set on finding the opium, which she believes will help ease the pain of wounded soldiers.
Essentially bribed into helping, Wasey and Tatlock begin the search for Wu Ch'En She (George She), Faraday's former valet who stole Faraday's Flowers as Shanghai was engulfed in chaos. Unfortunately, they are not the only ones searching for this stash. It isn't long before Wasey and Tatlock are both pursuing and the pursued. Everyone from warlord Mei Gan (Kay Tong Lin) to baseball-obsessed gangster Joe Go (Clyde Kusatsu) and even Faraday's frenemy Willie Tuttle (Richard Griffiths) work with or against them in their pursuit.
We even get Faraday's former mistress China Doll (Sonserai Lee) and the ever-present yet unexplained Justin Kronk (Philip Sayer) into this mix. Faraday's Flowers may not be what people think they are, and neither may some other figures milling about. Ultimately, Wasey's glow-in-the-dark ties may be the key to get at this treasure, with Gloria Tatlock as a bonus prize. 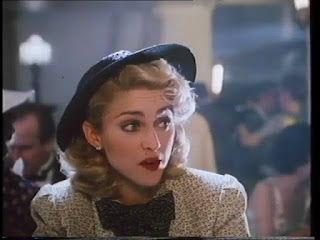 The summary of Shanghai Surprise is actually more straightforward than the film itself, as Shanghai Surprise pretty much jumps from one point to another with nary rhyme or reason. Is it a comedy? It is an adventure? Is it a drama? Is it a romance? Is it a musical?
Trying to make it all of them does not work, especially since at each point it fails.
I admit I did laugh at one particular scene, when Victor Wong offered "the reverend lady" insurance on her body parts in exchange for information. His offer to insure her "twin pagodas" or "haven of celestial bliss" made me laugh, but more in a cringe manner than in a hilarious one. A lot of the laughter from Shanghai Surprise comes from how inept and illogical the John Kohn and Robert Bentley adaptation of Faraday's Flowers was.
I admit never having heard, let alone read, Tony Kendrick's novel. However, there is simply no way to make a man with porcelain hands remotely threatening. Lim's Mei Gan came across as a Dr. No spoof that even Austin Powers would think was too silly. It was such an over-the-top performance that somehow, a villain having porcelain hands that he apparently can use to crush an opponent's with seems almost rational.
There are other oddball elements, such as Joe Go constantly referring to himself in the third person and the various sexual techniques that China Doll might use on Wasey. Poor guy: he has to have sex with a beautiful courtesan to literally pump information out of her. When they visit Tuttle at his cafe/brothel, two women mistake Wasey for "Phil Borak", but there is never an explanation to this. Was this a fake name Wasey had used? Was it a genuine case of mistaken identity? Why is this important enough to bring up? Why was it not brought up again? 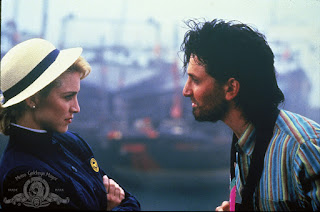 At the heart of Shanghai Surprise's failure are the figures who earned the nickname "The Poison Penns". Madonna simply embarrasses herself throughout Shanghai Surprise. A more generous interpretation can be offered in that Miss Tatlock had no consistency: one moment disgusted by Wasey, the next taking her clothes off to seduce him into staying on.
However, there are scenes and moments where you cringe at seeing how inept the Material Girl was. Throughout Shanghai Surprise, she did not act. She did not even really speak her dialogue. She instead seemed to just be there, saying things that did not appear to make sense to her, as if English was being created on the spot. Some moments were so bad in terms of acting, such as when she stomps up and down in anger, that it simply boggles the mind how someone who controlled so much of her image would look at that and think it should be released.
Penn, however, makes things worse. He is a trained actor and future two-time Oscar winner, but here he looks bored and unenthusiastic. His performance also suggests that he did not know whether Shanghai Surprise was meant to be serious or silly, as he switches between the two, sometimes in the same scene.
Shanghai Surprise is remembered now, apart from its connection to the former Mr. and Mrs. Penn, for the songs the film's producer wrote for it. George Harrison's soundtrack, on the whole, I found fine even if not particularly great. I do not know why the title song needed to echo a James Bond opening credit scene (in this case, You Only Live Twice). Shanghai Surprise is rather curious, a song that I simultaneously like while also think is awful.
I am puzzled why one number, The Hottest Gong in Town, had to be in Dixieland style. It sets that wild, almost schizophrenic manner to Shanghai Surprise, not sure what it wants to be.
As I conclude my look at Shanghai Surprise, I am amazed that it has not been embraced as a midnight movie. I found Shanghai Surprise to be a "so bad it's good" film, a film that did entertain me, if perhaps if not the way it ended it to be.
DECISION: C-
Posted by Rick at 3:20 PM