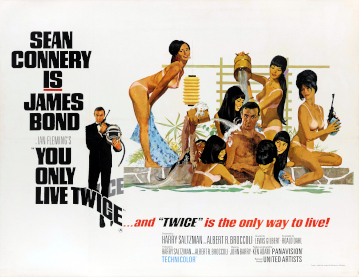 YOU ONLY LIVE TWICE

Please visit the James Bond Film Retrospective for all the Bond film reviews.

For what was billed as Sean Connery's final turn as the iconic James Bond, they pulled out all the stops.  You Only Live Twice has as its top draw the revealing of Number One himself: SPECTRE's head was going to be unmasked at last.  Furthermore, there would be all sorts of strange and shocking turns in You Only Live Twice:

Truth be told, YOLT did in fact live up to all that billing.  In a purely technical sense, he did die, marry, and even become Japanese.  We even got to at last meet the notorious Number 1.  However, despite all the positives in YOLT, the film doesn't quite come up to the heights it so aspires to.

We start with an American space capsule being stolen while in orbit.  The Americans accuse the Russians, the Ruskies deny it, and in come the sensible British, who suspect an unknown nation of doing this brazen act of war.  Their top man in Hong Kong is on top of this...and James Bond is on top of a beautiful Chinese girl.  Of course, she is duplicitous, and let's in a group of assassins who blow him away (James Bond Will Die).

Picking up after the theme song, we find Commander Bond's burial at sea, but obviously it's all a ruse.  He's been instructed to find out where that capsule is and who's taking them before the next one goes into space.  MI6 suspects the source is somewhere in Japan, and here he meets Aki (Akiko Wakabayashi), the beautiful agent for the Japanese Secret Intelligence Service.  She first takes him to Mr. Henderson (Charles Gray), an expat who gives him some information before being killed.  Eventually, Aki leads Bond to the mysterious and powerful head of the JSIS, Mr. Tanaka, better known to  his friends as Tiger (Tetsure Tanba).

Tiger gives Bond valuable information leading to a powerful Japanese corporation.  There is no time to waste: the Soviets have launched their own space capsule, which is also stolen mid-orbit.  Now they accuse the Americans, and the threat of war looms greater.  Bond works his way into the corporation, headed by Mr. Osato (Teru Shimada) and assisted by Miss Brandt (Karin Dor).  Unbeknown to Bond, Osato and Brandt are part of SPECTRE, and after failing to kill Bond the lovely Miss Brandt is offed by killer piranhas, while Osato (aka Number 11) is given one last chance.

This comes after Bond has had quick ninja training and his romance with Aki is at its peak.  The plan is simple: Bond, Tiger, and Tiger's ninjas will go to the small Japanese island they've pinpointed as the location of the capsules and where the abducting rocket originates.  Once there, they will pose as humble Japanese fishermen until they are ready to storm the mysterious base.  This plan will require Bond to look like a Japanese fisherman himself, complete with Japanese wife (James Bond Will Marry.  James Bond Will Become Japanese).

As Bond's bride, we have the beautiful Kissy (Mie Hana), and it's a good thing too.  Aki was the one accidentally killed with poison rather than Bond, so now Kissy has to accompany him to the volcano lair.  No time to lose: the Americans have pushed their next rocket launch up, so if it taken before the mystery group is stopped, there will be war.  Here, Bond enters and finds the missing astro/cosmonauts.  However, he is captured, and brought before Ernst Stravo Blofeld (Donald Pleasance), the long-sought Number 1.  The Japanese, having been alerted by Kissy, find the lair and thus begins an epic battle.  The rocket, which has already been launched and is about to swallow another space capsule (that's an odd sentence), is stopped just in time.  Blofeld, however, manages to escape (leaving his pussy behind).  You Only Live Twice ends with Bond and Kissy in a passionate embrace.

What puts YOLT down is that despite the fact that it is a little under two hours, the film feels much, much longer.  Primarily this is due to long sequences that either don't add anything to the plot or seem rather excessive for the purpose they do serve to the plot.  Take for example the lengthy chase scene to get to Tiger.  There has to be a car chase (one of many) and then a rather elaborate trap door and slide down to his lair (unconsciously reminding people of the finale to The Lady From Shanghai).  There is also a helicopter chase that while exciting, doesn't appear to add anything to the story (one figures there could have been a better way to scope the island).  The entire opening where Bond is "killed" appears to be rather elaborate for something that we know (or should) that is just a ruse.

Again and again, there are scenes and incidents in YOLT that appear to be there just to serve as spectacle.  Even worse, there is remarkably little payoff.  We get a long scene to admire the ninja training, but very little of Bond himself taking said training.  Even worse, in the epic battle inside SPECTRE's volcano lair, Bond doesn't use any ninja training save to launch a hira shuriken (ninja star) at someone.  We also have a rather curious scene where Tiger entertains Bond in what appears to be Tiger's harem.  It may be to have a counterpoint to Bond's predilection for bedding beautiful women, but it does slow down the film.

We also have when Bond is taken aboard a ship bound for the mysterious island.  Miss Brandt is first hostile to Bond, but quickly falls to his arms.  Granted, part of James Bond's charm is how quick he can seduce a woman, but here, suspension of disbelief can only go so far (especially the way the scene is played).

Let me digress to say the entire "James Bond will marry/become Japanese" seems both silly and gratuitous.  The idea that the 6'2" Scotsman could plausibly pass for Japanese seems both absurd and today slightly insulting.  Granted, there is a reason to go through this 'yellowface' routine, but somehow it all seems rather too elaborate for a plan (when smuggling him onto the island seems the more logical and realistic choice).  Furthermore, why does he have to marry at all?  Again, it's nice to see a traditional Shinto ceremony, but why go through all this?  Are they going to check his papers on arrival?  Will people be convinced that Bond constantly hunching down will show he's really of Asian descent?

Adding to that, given that Kissy was totally unimportant to the plot (I don't think her name was mentioned once in YOLT), why not just keep Aki around?  She would have made for a better Bond girl than Kissy, who did nothing but run around in a skimpy outfit.

Finally, the big reveal of Number 1 was a mixed bag.  On the one hand, Donald Pleasance is excellent as the malevolent Number 1, bringing a mix of menace and old world charm to the role.  On the other, he had a small role and very little to do.  Both the ultimate reveal of Number 1 and what he did on-screen could have been much, much better.  Add to the let-down was that, despite Pleasance's best efforts, his voice is recognizable when trying to sound like the Number 1 of previous Bond films.  Still, when you get an actor as good as Donald Pleasance to be the villain, you earn points.

I digress to point out that, despite the lavish budget, the constant use of rear-screen projections was painfully obvious and even in 1967 a bit hard to miss, and distracting to boot.

I gather that Roald Dahl (he of the Chocolate Factory and Giant Peach fame) took a few characters and plot points from the original Ian Fleming novel and basically fashioned an original screenplay in all but name for You Only Live Twice.  It's a curiousity to me why director Lewis Gilbert didn't ask him to cut some things out.  Dahl's screenplay only serves to lengthen the story, going through a lot that didn't need to be there.

In terms of the acting, Connery continues to show why he's considered THE James Bond, making 007 an easy charmer and dangerous professional killer.  I did, however, get the sense that by now he was merely going through the motions (anyone who didn't burst out laughing when told he was going to try and be passed off as a Japanese leaves something to be desired).  Tanba's Tiger was professional, if at times a bit gruff, and Wakabayshi excelled as Aki, making her end in YOLT all the more pronounced when Hana's Kissy took over.

YOLT is just a very long film for the story it wants to tell, trying a bit too hard to be a big James Bond film where a smaller one might have served better. It may be true that You Only Live Twice, but will one want to see it more than once?

Next James Bond Film: On Her Majesty's Secret Service