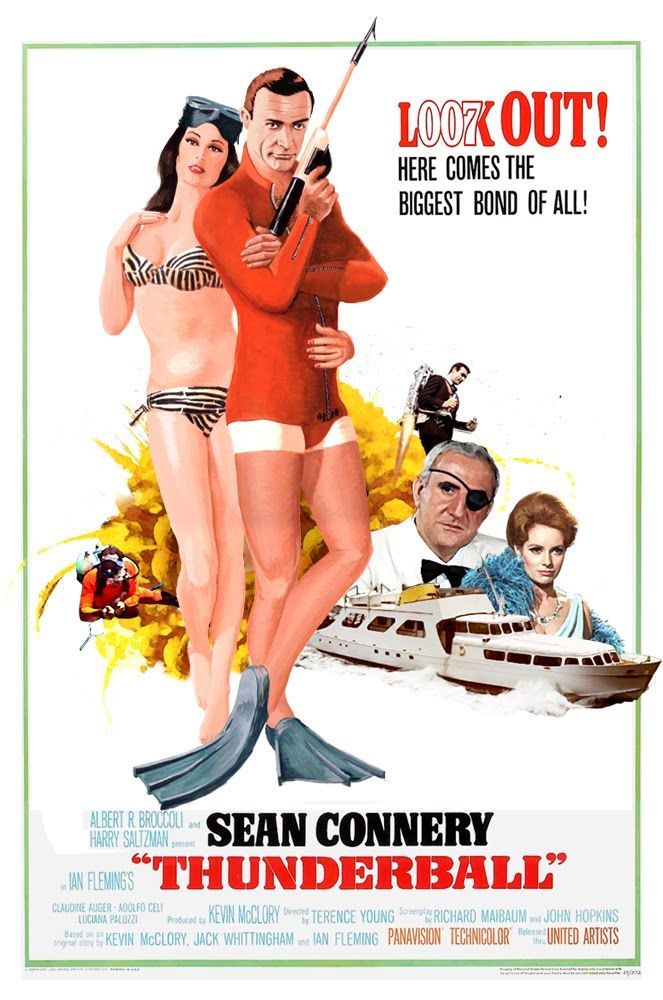 The Thunder From Down Under the Sea...

Whether the maxim "bigger is better" was the inspiration or not, Thunderball was certainly more spectacular in terms of plot and action than its predecessors in the James Bond series.   In certain ways, Thunderball has some great moments of action, and is a return to form from other Bond films.  In other ways, Thunderball is less than the sum of its parts.

SPECTRE is back!  The nefarious criminal organization is plotting its most daring plan: it will steal two nuclear bombs and blackmail the United Kingdom and United States.  With the time ticking, MI6 must track down and recover the weapons before the governments are forced to pay off SPECTRE.

This is such a vital mission that all 00s are brought in, including 007 James Bond (Sean Connery).  All the 00s are brief about the recovery operation, codenamed 'Thunderball'.  Bond, however, has what I can call 'inside information' about this plot.  While recovering at a spa from his previous assignment, he sees a mysterious patient all bandaged up, one Count Lippe.  He then sees this man, dead, but the face matches the pilot of the NATO plane flying the plane from which said bombs were stolen.  Due to this, 007 is sent to Nassau to investigate the pilot's sister.

Said pilot's sister, Domino (Claudine Auger), is the mistress of one Emilio Largo (Adolfo Celi).  Largo is (unbeknown to anyone except the audience), Number 2 in SPECTRE, the mastermind of the nuclear bomb heist.  Domino is unaware of the connection between Largo and her brother, but Bond is.  007, aided by field agents Paula (Martine Bestwick) and CIA agent Felix Leiter (Rik Van Nutter) soon begin a search for the bombs.  Hot on Bond's trail is Largo's assassin, Fiona Volpe (Lucianna Paluzzi), a dangerous markswoman.  In long order Bond gets close to Domino, Paula is killed by Largo's agents, Largo learns of Bond and his investigation, Fiona and Bond get it on, and in a daring underwater battle, the Navy (I think it's the American given the target ends up being Miami) and SPECTRE engage in an epic battle for the safety of the planet.

All the Bond films up to now have slowly been building themselves to be big productions, and Thunderball is just that: a BIG production.  The plot is bigger (and more grandiose), the action is bigger (particularly in lengthy underwater action sequences).  Unfortunately, not everything that was made bigger worked better when it came to Thunderball.

One of the things that was bigger was the length of the film: at two hours and ten minutes, it is fifteen minutes longer than the next longest (From Russia With Love).  That in an of itself isn't a terrible thing, but somehow what is amazing is that for all its length so much of the story is put on screen that one wonders if maybe this once we could have told rather than shown.  Normally, I'm not a big fan of exposition dialogue, but after seeing the lengthy theft of the NATO plane, did we really need a briefing of all the 00s to tell us this again?  Once we get the mission (to locate the nuclear weapons), it almost seems a waste to go back to MI6 to check in on how the government is doing to get the diamonds that SPECTRE demands as payment.  Maybe once, but twice (at least)?  The very lengthy spa stay (where we get all the backstory of SPECTRE's plan to use a double) appears to almost be a movie in itself, and there's a point in that sequence that borders on camp (more on that later).

Another BIG problem for this BIG film is some of the acting in Thunderball is awful.  With Auger the series reverts to an old-Bond Girl standby (get a former beauty queen to play the part).  The former Miss France looks lost, almost confused as to what to do on screen.  There isn't a hint of emotion in Domino, just a blank expression throughout Thunderball (even when being attacked by Largo, Auger doesn't appear to understand the point of acting is to create an emotional connection between the situation and the character).  The fact that Auger was dubbed by Nikki Van Der Zyl does not help matters.

One might excuse Auger for not being an actress (since she wasn't), but how to explain Van Nutter (a name to be played with) as Leiter?  This is the third Felix we've seen in four films (the Leiter-like role in From Russia With Love being filled in by Pedro Armendariz's Bey). Van Nutter is ridiculously cool and casual about everything, almost uninterested in anything going on around him.  He was so flat as Leiter one wonders why he was there at all.

There were parts in Thunderball that perhaps could have been sacrificed without affecting the overall flow.  Take the very lengthy spa stay by Bond.  In one scene which is suppose to be nerve-wracking, Bond is tied to a spinal traction machine for therapy.  A mysterious figure then comes and speeds up the machine...and Bond might be killed by being stretched to death.  As I watched this (including Bond's point of view, or POV, as the machine goes mad), to me, it didn't look particularly menacing.  Instead, it looked almost comical.  I couldn't take that part seriously, nor when after undergoing such a 'harrowing' ordeal, he could seduce the therapist so quickly and easily.  This whole sequence appears to just stretch Thunderball (pun unavoidable).

A big problem with Thunderball really is the length...it takes a long time to get all the pieces of the plot together (the search for the downed NATO plane perhaps could have been wrapped up sooner or written off in one line of dialogue), but on the plus side, once we got to the actual fight for the bombs, Thunderball really picked up.

I understand the underwater sequences (of which there were many) divide people: some think they are spectacular, some too long and convoluted.  I'm in the former category: I thought they were beautifully filmed, in particular the climatic battle (which I thought was a good way of trying something new).  For me, the underwater battle scene was quite impressive.  However, I can see the latter's argument: sometimes the number of times something took place underwater soon became a bit draining (no pun intended).  I digress to say that perhaps one of my favorite films is 20,000 Leagues Under the Sea I might be a touch prejudice in favor of seeing things going on underwater.

While Auger and Van Nutter were pretty bad in Thunderball, other actors were excellent.  Connery owns the part of the smooth yet dangerous James Bond, someone who has no problem killing people but who also feels for Domino when he has to reveal what her lover did to her beloved brother.  Paluzzi is an excellent villainness as Fiona Volpe, a woman who is both beautiful and ruthless.  I can't decide if she is really a Bond Girl in that she is filling the henchman part, but she was more interesting than the flat Auger as Domino.  It almost seemed a shame that Volpe's end was so anti-climatic.  I would have liked for her to have gone out with a bang (I just give up trying to avoid puns).

One also has to complement Celi's Largo (even if he too was dubbed, by Robert Rietty, thus begging the question, 'why don't they just get people who can speak English without a heavy accent?').  Largo is played as intelligent, almost urbane, but highly ruthless.  He has no trouble tossing someone into his literal pool of sharks.  In short, Largo is not a man to be messed with, but he is the type to not be overt about his machinations.

A plus in Thunderball is in the production itself.  We get Maurice Binder back for the first time since Dr. No to create the title sequence (which is a beautiful piece of art with its silhouettes of people swimming underwater).  As stated, the underwater sequences are well-shot (if perhaps a bit too much near the end), and some shots by cinematographer Ted Moore are brilliant (such as getting the POV of the unfortunate who gets thrown into the pool of sharks.  Seeing the clear water turn red is a remarkably chilling scene).  Director Terence Young kept things moving (for the most part) and created some real moments of tension (such as Bond's escape during the Nassau, Bahamas festival of Junkanoo--the equivalent of Mardis Gras).

In regards to John Barry's score, it flowed naturally without overwhelming the film.  The exception may be the title song.  Nothing against Tom Jones, but to my mind, Thunderball is a little overblown (any song that causes someone to faint because they had to hold the last note for so long that it overwhelmed them may be a bit too much).  I also liked the fact that the secondary Bond theme 007 was woven into the Junkanoo scene smoothly, as was a proposed Thunderball title song not used, Mr. Kiss Kiss Bang Bang (the instrumental used in the Kiss Kiss Club scene).

On the whole, Thunderball is a good, strong James Bond film.  However, it is a bit long, some of the acting is pretty bad, and it takes a while to build up.  Thunderball is a film that is bubbling up with possibilities that just fail to all reach the surface.

Next James Bond Film: You Only Live Twice