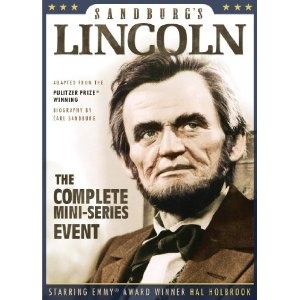 *Author's note: in recognition of two Lincoln-related films, the biopic Lincoln and the horror/comedy Abraham Lincoln: Vampire Hunter, I've decided to look at two television miniseries about the 16th President of the United States.  This is the first.

No American President in history has held or will ever hold the power over the American psyche as Abraham Lincoln.  If any President has become iconic, mythical, almost god-like, it's the one-term Congressman who became the first Republican Party candidate to obtain the high office.

It's no surprise: Lincoln's term was the most tumultuous in American history, one where his entire term in office was consumed by an epic struggle to keep the Union together, where the issue of slavery, which had torn the nation apart, was going to be answered once and for all.  These five monumental years between 1860-1865 were so important and traumatic to the nation that the Civil War divides American history: pre-Civil, post-Civil.  Lincoln's whole life, from backwoods country lawyer to the most revered President in history (sorry Ronnie, sorry Barry) and one of the most respected men in the American psyche is the stuff of legend.  It is also the stuff of great drama.

In 1974 a six-part miniseries was shown: Lincoln (or Sandburg's Lincoln, taking the name from the biography by Carl Sandburg).  In its episodes, we get most of the life story of President Lincoln, with particular emphasis of his time in office.  Sandburg's Lincoln is, if one watches it today, a bit stodgy, and perhaps a little disjointed, but it also has some of the best performances of President and Mrs. Lincoln given as of today.

Sandburg's Lincoln starts with Crossing Fox River.  It covers the campaign and election to President of the United States by Abraham Lincoln (Hal Holbrook).  First Lady Mary Todd Lincoln (Sada Thompson) is in turns anxious and excited.  Lincoln has no stomach for wheeling and dealing of Cabinet posts in exchange of this, that, and the other, but it is done.  We end with a visit to his stepmother, a widow now, and how he will probably never see her again.

Mrs. Lincoln's Husband covers the machinations of his Secretary of the Treasury Salmon P. Chase (who curiously is called "Solomon" by the President) to become President himself, especially with his daughter Kate (Elizabeth Ashley) pulling the strings.  The First Lady's evolving extravagance and suspicions of her sympathies (in particular when her sister, the widow of a Confederate officer, is housed in the Executive Mansion) is also covered, as that of the death of their child Willie and the First Couple's private moments.

Prairie Lawyer, oddly, goes back in time before his Presidency.  The bulk of the episode covers when attorney Lincoln defends a man against murder charges against his future opponent for President, the Little Giant himself, Stephen A. Douglas.  It also takes time to show the courtship by Lincoln to Miss Mary Owens, who after he through wit and shrewdness wins his case decides to break off their romance.  It ends with Lincoln attending a cotillion, where he meets Southern belle Mary Todd.

Going back to the future with Sad Figure, Laughing, we see more of the struggle between the basically honorable but stiff Chase and the more folksy Lincoln.  The Last Days covers literally that: the end of the war, Lincoln's premonitions of death, the return of their son Robert from the war, and an extended idyll where Mr. and Mrs. Lincoln discuss their hopes and plans for the future: Lincoln's desire to see the Holy Land, the First Lady's wish to see Paris, and a hope for a quiet retirement back to Illinois.   The final episode, The Unwilling Warrior, again, goes back to the past, just before he takes the train from Springfield to Washington City for the Inauguration, the plot to assassinate him in Baltimore, the death of his friend, the young Colonel Ellsworth, his struggles with General George McClennan to get him to fight, and ends with him arriving in a defeated Richmond, Virginia, former capital of the Confederate States of America.

I trust that Sandburg's Lincoln, as it appears on DVD, is in the exact order of how Sandburg's Lincoln appeared on television in 1974 (I was not around to witness it myself).  That being the case, I do wonder why the producers decided to have Lincoln slightly disjointed; instead of going in a straight, chronological order, we get two episodes about his Presidency, go back to his early years, hop back to his last days, then in The Unwilling Warrior we have a bit of a hop and skip from just before his Inauguration and his early days to the fall of Richmond.  In terms of narrative and structure, I found the decision to jump around a bit puzzling, feeling that a more linear story (with perhaps one glimpse of his early days) would have served better.

I also found the sets to be unconvincing, looking exactly like sets.  The stage-like setting of Lincoln (apart from when they are obviously on location) took away from the believability of the story.  One can't fully accept you are watching reality when you are thinking the "homes" are on soundstages.

This, however, shouldn't take away from some dynamic performances in Sandburg's Lincoln.  It should be obvious that President Lincoln was not around when audio and video recording existed, so no one alive would know exactly how he sounded.  However, Hal Holbrook so embodies the President it is hard to believe he didn't study Lincoln personally.  Holbrook captures the Lincoln from history: the folksy demeanor ready with a quick joke or story, but he couples him with a shrewd political mind (one who would have a team of rivals in  his Cabinet).  He also gives Lincoln a true humility in his dealings with people, an understanding of what motivates them.  For example, while his friends and advisers insist he get rid of Chase, Lincoln resists.  Holbrook's performance explains why: his Lincoln sees the Big Picture, and moreover, we see how Lincoln understands people, sometimes better than they understand themselves.  Thanks to the script and Holbrook's performance, we see that Lincoln knows that Chase is highly ambitious but also highly principled in his behavior towards his oath of office, making his plots rather weak.

Over and over, through Halbrook we see the intelligence in Lincoln (the President's passion and enthusiasm for Shakespeare, his understanding of human nature), the compassion in Lincoln (how he rarely appears angry when something goes wrong, but more accepting of the flaws of human nature), and the humanity of Lincoln (in his dealings with his wife and indulgence of his children).  In particular are the scenes when we see the President unguarded, as when he is with his stepmother, who raised him, in the first episode.  It's a beautiful, tender interaction between parent and child, and shows us a bit of the private man behind the legend.

Finally, Holbrook's performance is helped by the strong regional accent he carries in Lincoln.  His pronouncing of "widow" as "widder" and constant stories of rural life show us he was both highly educated and a common man.

Matching him is Thompson's Mary Todd Lincoln.   Thompson shows us both the woman easily wounded by the slightest of slights and one deeply in love with her husband, forever loyal to him.  Mary Todd could be odd (as when she accuses her husband of flirtations with other women) but we do see that behind a brittle exterior is a woman deeply and passionately in love with her husband.  In The Last Days, Thompson and Holbrook share a long scene where the Lincolns plan for the future, and as one watches, they are so good one almost feels like one has dropped in on an intimate conversation.  They joy and optimism they express comes true, and our knowledge that it is not meant to be makes their last moments on screen, where they ride off blissfully before heading to Ford's Theater, all the more sad.

Sandburg's Lincoln is not without its flaws (the structure is a bit odd, important characters such as Secretary of War Cameron come and go while others such as Lincoln's loyal secretary John Nikolai appear but never make clear why they are so loyal to the President, and the sets are not altogether convincing).  Also, the picture quality has been compromised; despite it being only almost forty years since its broadcast Sandburg's Lincoln looks like it is close to freezing in the middle of the picture.   A greater reliance on structure (in particular with Ashley's wonderful turn as Kate Chase, both respectable lady and conniving bitch) would have helped tremendously.

However, with great performances from Hal Holbrook as President Lincoln and Sada Thompson as First Lady Mary Todd Lincoln, Sandburg's Lincoln is a good introduction to what made President Lincoln so extraordinary as both a leader and a man.  I would recommend it more for elementary to middle school students who won't be too bothered by the sets, but on the whole, Sandburg's Lincoln is a worthy miniseries for the Citizen Kane of Presidents.