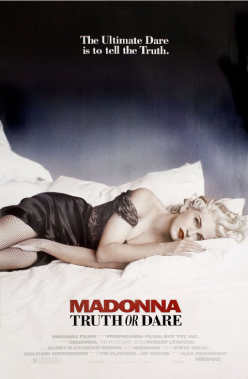 Few pop stars have been as loved and hated in equal measure as Madonna Louise Ciccone. Madonna: Truth or Dare chronicles her Blonde Ambition Tour, though whether it was meant to positively or negatively portray our fair diva is left to the viewer.

Traversing from the rainy season in Japan down to the North American and European legs of her tour, Madonna shares her insights in voiceover on various issues ranging from her "emotionally crippled" backup singers and dancers to how displeased she is that Kevin Costner thinks her show was "neat". There are the various difficulties technical and otherwise: from heavy rains in Japan that she was unaware of or prudish Toronto police threatening arrest to the Pope finding her mockery of Catholic ritual objectionable.

As she tours around the world, from London to the Bay, apparently nothing is off-limits, much to the irritation of her then-boyfriend Warren Beatty. I figure sometime during the Blonde Ambition Tour they broke up, because during Truth or Dare she is open about planning to seduce Spanish actor Antonio Banderas. Unfortunately for our temptress, "Antonio Bandaras" as she calls him was then happily married. As the tour ends, she bids farewell to her ersatz family, the mother who must let her children fly. 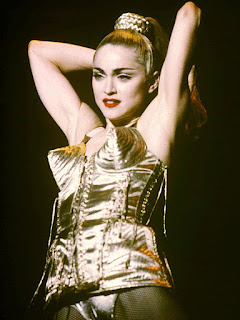 To say Madonna has a healthy ego is an understatement. Few people would think twice before almost gleefully discussing their seduction plans only to dismiss said subjects of seduction as having a small penis when they fail in their conquests. I am somewhat puzzled by how someone who shrewd in managing their image would at times have no issue coming across as vain to vapid.

Even if Madonna wanted to be open about her life, calling her metaphorical children "emotionally crippled" or being somewhat dismissive of a former friend's near-naked plea for help does not make her look good. At times, Truth or Dare is a bit cringe-inducing. Moira McFarland, the childhood friend fallen on hard times, asks the Material Girl to be her latest child's godmother. From what I saw and remember, Madonna's noncommittal response suggests a woman who sees her former friend as more a bother than a person.

To be fair, Madonna does appear to let her guard down at times. During one of the truth or dare games she plays, her immediate and somewhat mournful response of "Sean" when asked who the love of her life was suggests that despite the misery that she and Sean Penn put themselves and each other through, she still would not trade it for anything.

Maybe trade it for erasing all copies of Shanghai Surprise, but who is to say.

She also appears to be a loving, even protective daughter to her father Tony, leading a mass singing of Happy Birthday when she performs in her hometown of Detroit and joyfully irritated that he wonders if she can get him and his wife tickets to a show. 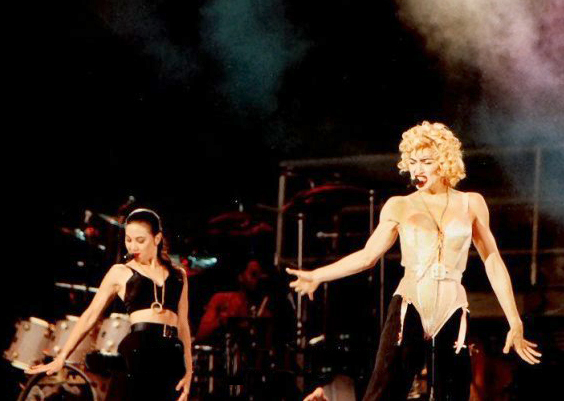 As for the now-infamous moment of her visit to her mother's grave, I did not think it was as ridiculous as it has been reported. It was a bit peculiar her lying next to the gravesite, but I do not mock people for mourning their parent in their own way.

Truth or Dare splits sequences between black-and-white for the non-concert footage and full-blown color for her various performances. For me, it does make me wonder what a full concert film would have been like. It is clear Madonna is proud of her show. This is clear when her anger erupts over technical issues, though how her frequency is different from that of her emotionally crippled backup singers I can't guess at.

As a side note, I do not know why that phrase, "emotionally crippled", has stuck with me, though to be fair I do not remember if she thought it was her backup singers or dancers who got this peculiar title.

However, Truth or Dare is not about Madonna's concert tour. It is a portrait of the artist as a diva. Warren Beatty appears both perplexed and irritated by how incessant the cameras are and how she is almost maniacally going along with the chronicling. "She doesn't want to live off-camera, much less talk", he observes. It suggests he wonders not only why Madonna wants everything documented but also whether the documentation is to showcase her own sense of brilliance.

Perhaps I did not end up thinking much about Madonna: Truth or Dare because I had seen Julie Brown's spoof Medusa: Dare to Be Truthful long before I saw the object of Brown's mockery. That take was intentionally hilarious and succeeded wildly in that department. Whether or not you think Madonna: Truth or Dare is also intentionally hilarious or not I leave to viewers. For myself, I found the concert scenes more revealing than the backstage scenes.