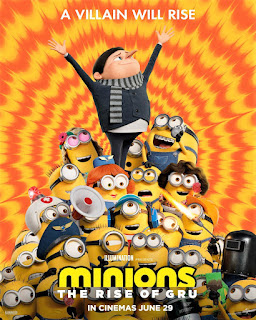 MINIONS: THE RISE OF GRU

The talking twinkies and their "Mini Boss" are back at it again. Minions: The Rise of Gru is silly, frothy fun, with lots of jokes that parents will appreciate and big, bright colors and silliness that kids will like.

In 1976, 11-year-old aspiring super-villain Gru (Steve Carell) is eager to join the Vicious Six, an international criminal gang. Oddly, the group, headed by groovy super-villain Belle Bottom (Taraji P. Henson) scoffs at the idea of a minor replacing White Knuckles (Alan Arkin), whom the Vicious Six has gotten rid of via nefarious means.

However, you can't keep a good, or bad, child villain down. Gru steals a magical medallion from right under the Vicious Six's noses. Unfortunately, Otto, one of the Minions (Gru's yellow, gibberish-spouting henchmen) trades it in for a pet rock. In the confusion, White Knuckles returns from apparent death and abducts Gru as part of his revenge against the Vicious Six. The main Minions now go to San Francisco to rescue Gru, trained by Master Chow (Michelle Yeoh) in the art of kung-fu, while Otto manages to recover the medallion.

In San Fransisco, it is full-on chaos during Chinese New Year as the Minions, Gru and White Knuckles join forces to battle the Vicious Six in an ultimate showdown involving magic and mischief. With Gru triumphant and his mentor making yet another miraculous resurrection, there is no limit to their wickedness. 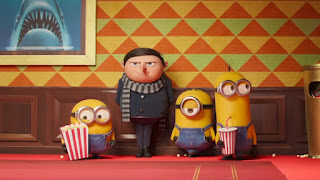 I was charmed by Minions: The Rise of Gru. This film does not take itself seriously and coming in at a brisk 88 minutes we still get a lot of Minion mayhem. In their strange language and oddball antics, I think the Minions have grown into quite the delightful symbols of playful anarchy. Their efforts to get to San Francisco will be the highlight for the toddler set with their inability to fly an airplane properly.

There are a lot of sight gags that work to elicit laughter. Of particular note is when via Gru's narration we see how the Minions answered a help wanted ad and convinced Gru to hire them by pulling a fast one over him involving the rain. The Rise of Gru has very funny moments that show it is not above being absurd beyond the point of rationality, but I think it knows its target audiences: small kids and their families.

While kids will enjoy the Minions going about their lunacy, the parents will I think appreciate the various visual shout-outs and puns. The opening credits are clearly a spoof of James Bond openings, and the film is not afraid of almost groan-inducing wordplay. The Vicious Six's criminal gang not only includes a person named "Belle Bottom", but another villain named Nun-chuck, who is a literal nun that swings nun chucks. As The Rise of Gru is set firmly in the 1970s, audiences will get a lot of disco music. 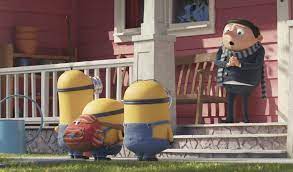 Somehow, the idea of torturing little Gru in a device dubbed the "Disco Inferno" by having him spin on a giant record to Andrea True Connection's More, More, More is hilarious. Granted, it got that song stuck in my head for about two days, but it was a torture I was willing to live with. The feel for the 70s extended to the film's theme Turn Up the Sunshine, helped by having Diana Ross sing the song. We get nods to Tupperware parties and pogo sticks (which I was unaware were big in the 70s), pet rocks and an oddly moving use of The Carpenters.

If anything, The Rise of Gru understood that there had to be something for adults to latch on to.

Curiously, The Rise of Gru managed to evoke memories of more recent films like Everything Everywhere All at Once and even The Black Phone. However, there is nothing in The Rise of Gru that I think would give offense. One or two moments might be a bit intense for really small kids, but the film quickly establishes that things are ultimately all right.

The Rise of Gru is not perfect. The film did not use the voice cast to the best of its abilities. With a cast that had not just Henson but Lucy Lawless, Jean-Claude Van Damme and Julie Andrews voicing various characters, they did not seem that important. However, on the whole I think Minions: The Rise of Gru will please kids who love the Minions and their parents and grandparents who will like hearing the latest offerings from the Criminal Records store.

Silly, frothy, short enough to keep small ones amused, The Rise of Gru works well enough to be a nice, cute, delightful romp.