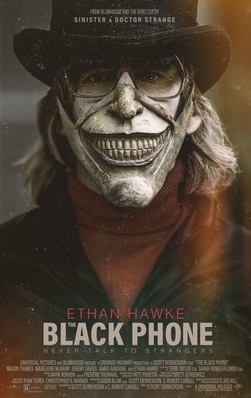 THE BLACK PHONE
I confess to finding the premise of The Black Phone very disturbing. As such, I was not eager to see it. However, The Black Phone offers some excellent performances, a great sense of atmosphere and a mostly restrained visual style that works well.
1978, the suburb of West Denver is being terrorized by a kidnapper known as The Grabber. The community is concerned, but life has to go on. That life, however, is not particularly good for Finney (Mason Thames) and his sister Gwendolyn (Madeline McGraw). Living with their abusive father Terrence (Jeremy Davies), Finney also endures bullying, though both Gwen and tough kid Robin Arellano (Miguel Cazares Mora) come to his aid.
Robin may be tough, but not tough enough against The Grabber. Neither is Finney, who is the next victim. A terrified Finney now has to deal with The Grabber (Ethan Hawke) and his deadly games. Finney, however, has surprise allies via a disconnected telephone in the basement he's been held in: the voices of the Grabber's past victims. Each call and some appear to Finney, giving him information that will culminate in his efforts to survive and escape.
Gwen is also able to help via her psychic powers and dreams which she attributes to her ideas of God. These are inherited from her late mother, which also cause Terrence great pain and may explain his violent manner and drunkenness, but will it be enough to save Finney from being killed? The race is on to save Finney and bring closure to the Grabber's past victims. 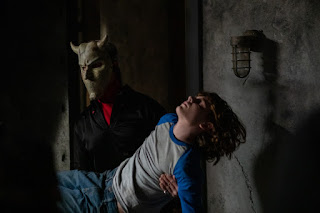 I get very uneasy when I learn of films where kids are placed in danger or killed. There is something distasteful to me about movies that place the most vulnerable in those types of dangers. One of my major concerns with The Black Phone as advertised was that it was veering towards torture porn; I am glad however that director Scott Derrickson (adapting the Joe Hill short story with C. Robert Cargill) was quite restrained on the subject.
The most violent abduction was that of Finney in terms of visuals, where the rest were either hinted at or not shown. Moreover, we saw at most only a few of them post-mortem, and even that was kept from being gruesome. There were a couple of jump scares, but The Black Phone used them sparingly. That in turn made them more effective.
People who make horror or supernatural films should take a lesson from The Black Phone that sometimes less is more. Rather than drench the audience in blood, The Black Phone filled the film with atmosphere, making things more involving and frightening.
The atmosphere also went into the film's visual style, which felt as if this was the late 1970s. The overall look of The Black Phone kept to both the times it was set and the dark, creepy nature of the story. 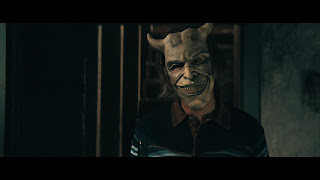 The Black Phone has been hailed for Ethan Hawke's performance of The Grabber. I am a little more lukewarm towards Hawke in this film. I am not saying he was anywhere near bad. He was effective as this creepy monster, someone in the John Wayne Gacy mode of serial killers with a dash of the theatrical. However, at times I did think he was a little camp and overdone as said crazed killer, putting in more theatricality than I thought necessary. On the whole, Hawke was effective: cold, cruel, with open sadism, he does not bother to try and make The Grabber sympathetic.
I would hope that The Black Phone is more remembered for the performances of the younger set. Thames is absolutely excellent as Finney. He shows Finney's fears, confusion and determination to survive. The evolution of Finney from this nice kid who is targeted by bullies to finding the courage to fight against the most dangerous of bullies is one of the best performances by a teenager that I have seen in a long time. The soon-to-be fifteen-year-old carries The Black Phone on his shoulders and makes it a star-making turn.
More than equal to Thames is McGraw as the younger sister. She is able to be sweet and sarcastic in equal measure, terrified of her abusive father but also mouthing off at the cops who cannot comprehend that she knows details due to her visions versus literally being The Grabber. One moment she is blaspheming against God for giving her visions but not helping find Finney, the next she is bicycling down the streets she has seen, begging forgiveness for doubting.
In turns funny and intense, McGraw shows a range and maturity far beyond her years.
I do not think there is a bad performance in the film. There are the ones from the boys who were victims and despite sometimes not being seen show distinct personalities. The adults also had strong moments, such as Davies, who went past the abusive father role to reveal a reason for his behavior. It does not justify his violent manner towards his children, but it also shows that he is not a monster.
I might be predisposed to move The Black Phone higher if not for the overall subject matter, which still troubles me. Less a horror film and more a thriller with supernatural elements, I think The Black Phone works well, builds up atmosphere, and is mostly logical. It has the benefit of excellent performances, and I think fans of the genre will like it. It is not in the Saw or Insidious mode, but it is a good film.
DECISION: C+
Posted by Rick at 9:10 AM