The Gray Man: A Review 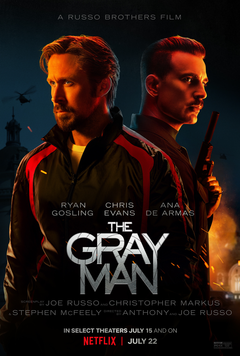 I am not a fan of the strong, silent spy characters that populate many a thriller. Figures such as Lee Child's Jack Reacher or the late Vince Flynn's Mitch Rapp are, to my mind, soulless and sterile. The Gray Man falls in the tropes of these action films. However, it managed to be extremely boring and far too long.

Super assassin known as Sierra Six or just Six (Ryan Gosling) finds his latest assignment a trifle more difficult. He does not botch the job but learns from the intended target that his true identity is Sierra Four. Four has secret information against Denny Carmichael (Rege-Jean Page), a top CIA officer who has been up to no good.

Six now goes rogue, and with him in possession of the information Carmicheal seeks out Lloyd Hansen (Chris Evans), a psychopath too crazy for the CIA. Hansen opts to hold hostage both Six's father figure/mentor Donald Fitzroy (Billy Bob Thornton) and Fitzroy's niece Claire (Julia Butters). Now, with the help of his frenemy Miranda (Ana de Armas), Six travels the world to find the Fitzroys while Hansen chases after him, with the shadowy Tamil assassin Lone Wolf (Dhanush) in league with Hansen. 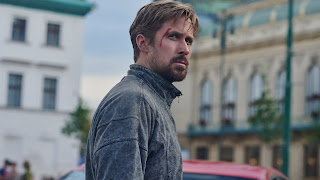 The best summation for The Gray Man for me is that it feels like the highlights special to a television show I have never seen or heard of. So much happened that it ended up showing us nothing happening. For example, Hansen's reluctant second-in-command Suzanne (Jessica Henwick) shouts at Hansen about how he killed Margaret Cahill (Alfre Woodward) and my response is, "Who is Margaret Cahill? Why should I care? What does it matter (especially since her character, we are helpfully told, is dying of cancer)?"

That we have a minor character made to be something of great importance with no buildup is a sign of how the novel might have built things up, but the film adaptation could not. It also set up a sequel without bothering to give us anything new.

What I find extraordinary is that I can summarize The Gray Man so briefly yet the film itself is over two hours long. And you feel every single minute of it, as it goes on and on, galivanting about all over the world and giving us nothing for our trouble. If there is a cliche that The Gray Man can hit when it comes to action films, it will go beyond hitting them and into pulverizing them.

The Gray Man goes into some of the crew's worst instincts. Ryan Gosling has simply not changed his method in acting: silent, blank, confusing emotionless for intense.  How long will Gosling keep up this schtick? Granted, when he is saddled with lousy lines as "You guys taught me how to kill people, not care for them"; even if he had had a better adaptation from Christopher Markus, Stephen McFeely and co-director Joe Russo (directing with his brother Anthony), Gosling did not make us care about Six. 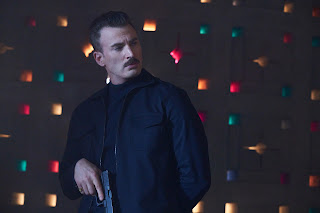 Gosling's restraint is countered by Evans' wild scenery chewing. I can grant a little leeway in that Lloyd Hansen is meant to be somewhat cartoonish. However, his quip-spouting figure with his Hitler mustache never proved menacing or serious. It is as if he knew The Gray Man was a paycheck and did not bother to take things seriously. As such, he took it as a license to overact. The one moment I thought was good was due to Evans. In the film, he says, "Extra ten million to the first guy to put a bullet in this Ken Doll's brain".

Whether that was a subtle jab at Gosling playing Ken in the Barbie movie, I cannot say.

It's a shame that Ana de Armas was reduced to a nothing role. With this and No Time to Die, I think de Armas is making a good case to be an action star in her own right. She's wasted in this role. Same for both Thornton and Woodward, cashing checks and not giving a damn. As for Dhanush's Lone Wolf (a comically bad name), who he is or why he develops scruples later on is a puzzle. I figure he is there to set up for a sequel, but The Gray Man never makes a case for why we would care about Six.

The fight scenes were similarly boring even if they were at times bordering on cartoonish. There's a laziness to some of them, where they end up more a chore than a thrill.

Dull story, poor performances, pointless situations. I thought The Gray Man was the worst film I have seen this year. Absolutely the worst, and the idea that there will be more horrifies me. If I wanted to see better takes on what The Gray Man offered, I'd go see Taken or Man on Fire, though not Suicide Squad, all of which The Gray Man took from.

We fade to Gray, and hope it fades away.